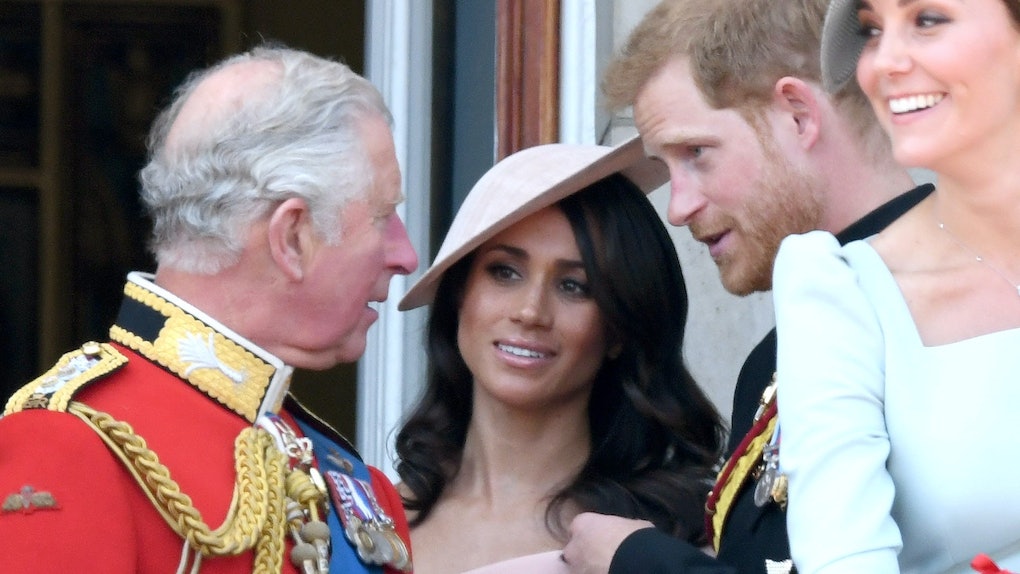 Everyone is talking about Prince Harry and Meghan Markle's tell-all Oprah interview. From stepping down as senior royals and dealing with tabloids, to Meghan and Kate Middleton's rumored feud, nothing was off limits during the television special, which aired on CBS on Sunday, March 7. One of the most surprising moments of all was hearing Prince Harry's quotes about Prince Charles from his Oprah interview.

The couple's two-hour chat with Oprah arrived months after they quit being senior royals in January. At the time, Meghan and Harry said they stepped back due to wanting to be "financially independent." Despite the Queen's statement saying it would no longer be possible for them to continue the "responsibilities and duties that come with a life of public service," the couple reassured everyone they would still be doing philanthropic work, but on their own. "We can all live a life of service. Service is universal," a spokesperson for Meghan and Harry said.

Based on their statements, it seemed clear there was a rift between the couple and the royal family. They confirmed that during their Oprah interview. Harry said whenever tabloids would criticize the Duchess, "nobody from [his] family ever said anything." The lack of public support they received ultimately made them quit their senior positions. "I took matters into my own hands," Harry explained. "I didn't see a way out. I was trapped but I didn't know I was trapped. Trapped within the system like the rest of the family. My father and my brother are trapped. They don't get to leave and I have huge compassion for that."

Unlike some rumors that claimed he "blindsided" Queen Elizabeth with news of his and Meghan's royal exit, Harry said he talked with his grandmother about their decision before they officially quit. He also had two conversations with Prince Charles "before he stopped taking my calls."

Because of everything that happened, Harry admitted it will take some time before his relationship with his father is healed. "I feel really let down. He's been through something similar. He knows what pain feels like. I will always love him, but there is a lot of hurt that's happened," Harry explained. "I will continue to make it one of my priorities to try to heal that relationship."

As for his strained relationship with his brother, Harry said, "I love William to bits. He's my brother. We've been through hell together. But we are on different paths."

On Thursday, March 11, William revealed he wanted to make amends with Harry, too. "I haven't spoken to [my brother] yet, but I will do," William said when he was approached by reporters in London.

Since then, CBS This Morning co-host Gayle King, who's a friend to both Oprah and Meghan, has revealed Harry and his family have been trying to work things out. "I'm not trying to break news, but I did actually call them to see how they were feeling," King said about the Duke and Duchess on Tuesday, March 16. "It's true, Harry has talked to his brother and he has talked to his father, too. The word I was given was that those conversations were not productive, but they are glad they have at least started a conversation."

Although it doesn't seem like they've fully reconciled just yet, they appear to be getting there!

More like this
Prince Harry's Instagram Tribute To Prince Philip Comes Straight From The Heart
By Michele Mendez
Meghan Markle & Prince Harry's Beef With The British Tabloids, Explained
By Brandy Robidoux
Meghan & Harry's Statement About Prince Philip's Death Is Simple, But Moving
By Sydney N. Sweeney
Stay up to date