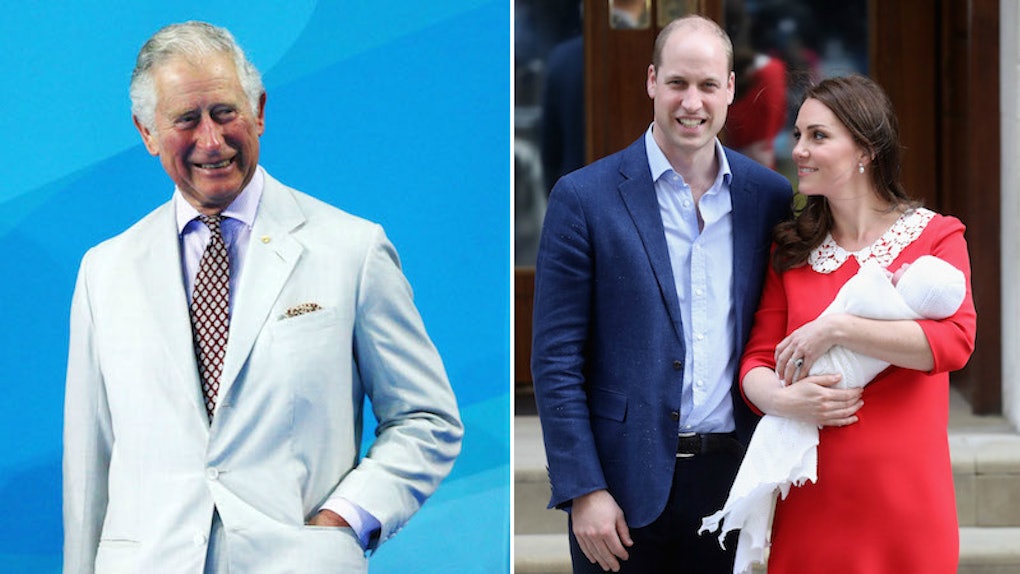 Everyone felt a lot of things when they heard Kate Middleton delivered her third baby. On April 23, a new little prince was born. Middleton and Prince William debuted their wee one on the steps of the Lindo Wing at St. Mary's Hospital to adoring fans, television cameras, and me, from my laptop. While everyone is overjoyed for the beloved royals, one person's reaction stood out in particular. Prince Charles' reaction to William and Kate's third baby is one of my favorites so far, and I'm not sorry about it.

On a breezy English morning, Kensington Palace tweeted that Middleton was headed to the hospital in labor. Shortly thereafter, the world learned she had a new baby boy, and both mom and baby were happy and healthy. It all happened pretty fast, TBH.

The Queen, The Duke of Edinburgh, The Prince of Wales, The Duchess of Cornwall, Prince Harry and members of both families have been informed and are delighted with the news.

If you're not the most versed in royal lingo and titles, (me neither, let's be real), I'll give you a quick roll call. The Queen is obviously Queen Elizabeth, her hubby Prince Philip is The Duke of Edinburgh, and The Prince of Wales is her son, Prince Charles. He's the 69-year-old father of Prince William, and the ex-husband of the late Princess Diana.

After the news of his grandson arrived, Charles released a sweet statement about his growing family. He said, "We [he and wife Camilla] are both so pleased at the news. It is a great joy to have another grandchild, the only trouble is I don’t know how I am going to keep up with them."

To be fair, it seems like Prince William agreed with this sentiment as he joked with reporters he had "thrice worry now" on his way out of the hospital with his newborn and wife. Both he and Kate Middleton looked happy (and incredible) leaving St. Mary's.

With all this family talk, one might wonder where the newborn stands in the lineage to the throne. The truth is, the new prince is fifth in line.

If you're confused, consider this helpful guide created by one Twitter user. I'm pretty sure it's accurate right up to Hugh Grant.

Thanks to the Succession of the Crown Act 2013, Princess Charlotte will make history as the first sister not to be surpassed by her younger brother on the way to the throne. The Act states the order of birth determines who becomes a king or queen next, not gender. I mean, hello forward thinking! Thanks for coming! The act's exact wording is: "An Act to make succession to the Crown not depend on gender; to make provision about Royal Marriages; and for connected purposes."

I imagine right now both the new prince and Prince Charles are taking a nap somewhere, dreaming of one day wearing the actual crown. As for the real Queen, she apparently is busy enjoying a casual horse ride, because she's just so boss like that.

What baby? This lady has places to go, stallions to tame. You guys get the picture.