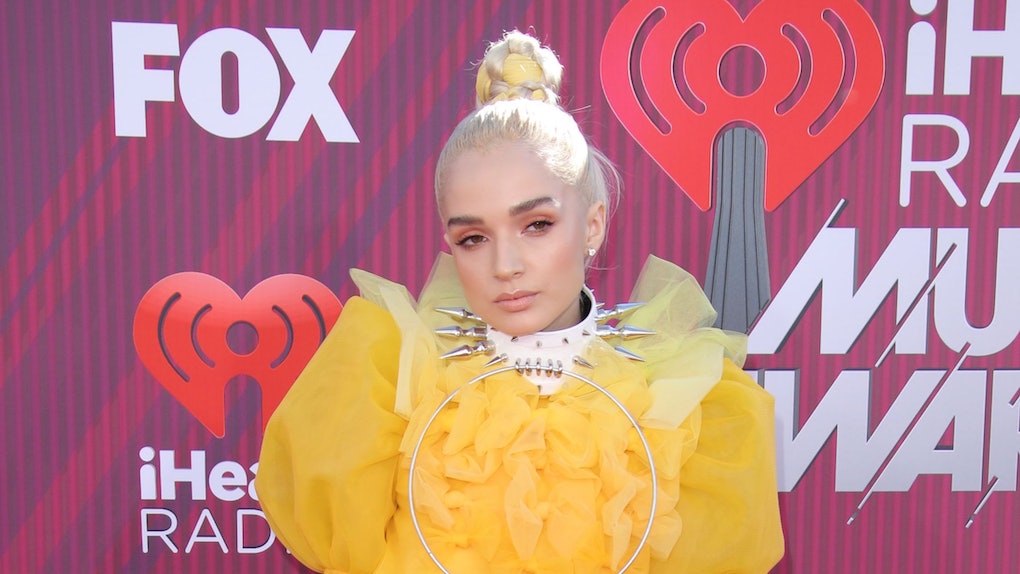 If you didn't already know who the singer Poppy is, you probably should, especially since Poppy's 2019 iHeartRadio Awards Dress is as wild as she is. Poppy's dress was designed by Viktor & Rolf and was just featured on the spring/summer runways this season. The couture gown was just one of the many moody dresses featured on the Viktor & Rolf SS19 runway most recently. With bright yellow tulle featuring the words "Go To Hell" underneath a skull on fire, Poppy's iHeartRadio dress was definitely a bold choice for the red carpet.

Poppy added her own accents to the dress, including a heavily-spiked white collar featuring a large silver ring hanging from the front. Her shoes are white with black and white stripes on the platform, and her earrings and other accessories are pretty subtle.

Poppy's makeup is also pretty subdued, with a soft burnt orange shade on the lids, and a neutral pink on the lips and cheeks. Poppy's hair includes a light yellow piece of fabric entwined in her bun.

With 835K followers on Instagram and millions of Spotify plays, Poppy has made a name for herself in the music industry. While it's clear that fans love her lyrics, many are confused about who, exactly, Poppy actually is. Claiming she comes from the Internet, Poppy's first debut was in 2015, when she posted a video of herself eating cotton candy. Since its release, the video has garnered 3.5 million views. But that's nothing compared to her most popular video titled, "I'm Poppy," where almost 20 million viewers have watched Poppy say, "I'm Poppy," over and over again for 10 minutes straight.

According to NPR, Poppy's given name is Moriah Pereira and she is from Nashville, Tennessee. Poppy claims to not know who Moriah is, and doesn't want to speak about Moriah's past, either. Poppy, Moriah, or maybe a little bit of both, her music is definitely as bubblegum pop as Poppy looks. Poppy's most popular track on Spotify is called "Lowlife," with a corresponding music video featuring a devil prancing around Poppy's all-white world.

NPR also reports that Poppy has apparently been asked whether she's part of a cult, but don't worry, because she made a one-minute video in 2017 assuring her fans that she's not in a cult. Poppy also seemingly loves to make videos, and has created over 300 videos with film director Titanic Sinclair. Poppy's fans (called "Poppy Seeds") have called Sinclair "a creative mastermind," according to NPR, and it seems that a lot of Poppy's success can be attributed to him.

I'm really curious to see if Poppy is ever going to accidentally crack open and reveal her true self, without the guise of her apparent robot voice and behavior. Regardless, it's clear that, robot, product of the internet, or not, Poppy's fashion sense is a whole freaking mood that's relatable AF. I think it goes without saying that Poppy is unlike any other star we've seen before, and I'm happy she's finally landed on our planet.