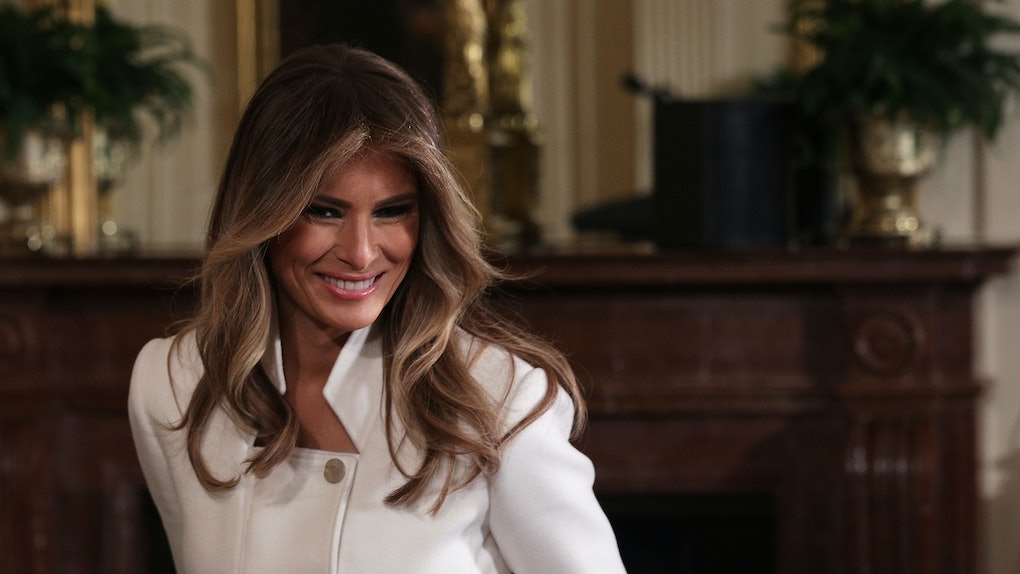 As President Donald Trump and First Lady Melania Trump's 12 day diplomatic trip of Asia is nearing its end, the first lady decided to spend some time without the president and go her own way. As President Trump went on ahead, FLOTUS spent a few days in China alone, where she went to the Great Wall and paid a visit to the Beijing Zoo. And the photos of Melania Trump with a panda are seriously the best thing we've seen out of this Asia trip thus far.

President Trump and the first lady left for their tour of Asia just after Halloween on Nov. 3, making this the longest tour of the continent by a sitting American president since George H.W Bush in 1991. The Trumps first stopped off in Hawaii before making their way to Asia, where they were scheduled to visit five countries, starting with Japan, and then continuing on to South Korea, China, Vietnam, and the Philippines.

But while the president continued on his journey to APEC Summit in Danang, Vietnam on Nov. 11, Melania Trump flew solo in China for a few days, where she made one very notable stop. At the Beijing Zoo, Trump met Gu Gu the panda, the zoo's official goodwill ambassador. And the photos of the meeting that the first lady posted to Twitter could not be more adorable:

Melania posted the snaps of her feeding Gu Gu through a cage (the panda's sadly mauled three people before) are super cute, and it's the happiest we've seen her maybe ever. I mean, who wouldn't be excited to feed a panda, right? The photo op is one of the most relatable moments we've seen from the first lady, who's sometimes been criticized for being out of touch.

This autumn, FLOTUS took heat for her ensemble choices, namely a pair of stiletto heels, when visiting Houston and Puerto Rico during recovery efforts following two devastating hurricanes. And on the Asia trip, she hasn't benefitted from revelations that her wardrobe on the 12-day trip could pay for a year at the average American college. So the first lady definitely needed this moment to shine. Trump was also adorably greeted by Chinese schoolchildren, who waved Chinese and American flags while they sang to her upon her arrival.

Earlier stops on the Trumps' Asia tour included very important stops in the region, including one to Japan to meet with Prime Minister Shinzō Abe and first lady Akie Abe. Trump and Japan's first lady spent a day at Kyobashi Tsukiji Elementary School, where she also took a calligraphy class that had the internet going nuts. Reddit users took the image of Trump and Akie Akbe holding up their creation, and started photoshopping hilarious things onto onto FLOTUS' paper, inspiring a so-called "photoshop battle".

One of the overarching goals of the diplomatic trip is to reinforce ties with America's Asian allies and show solidarity with nations that neighbor North Korea. Since Donald Trump has taken office, the threat of war from North Korea and their leader Kim Jong-un has never been greater. This makes the trip to Asia extremely important for the president and first lady — and possibly the most important Asia trip since Nixon's first trip to the continent back in 1972.

The trip went well for the most part. We managed to get away without any significant threats of war from Pyongyang, and people were impressed with how the president conducted himself in a, well, relatively presidential manner.

But because he is Donald Trump and has to say something off the cuff, he did manage to sneak in one ominous threat to North Korea. President Trump made a speech before South Korea's National Assembly, where he warned Kim Jong-un and his regime to not make a "miscalculation" of any sort regarding threats of war. He added, in his own typical fashion, "Don't try us." And on Nov. 11, he tweeted out an angry response to reports that North Korea had once again called him a "dotard," saying, "Why would Kim Jong-un insult me by calling me 'old,' when I would NEVER call him 'short and fat?"

And seeing as there seem to be so few wins this far in Trump's administration, it's definitely refreshing to see the president and first lady getting some positive press — especially if pandas are involved.