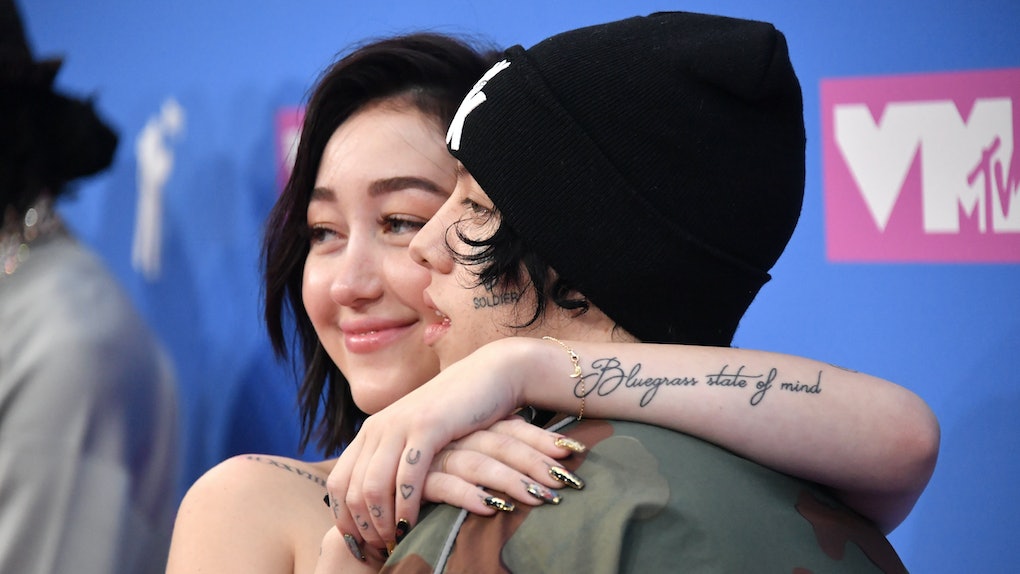 You can see some celeb breakups coming from a mile away. Others may take you completely by surprise. According to Noah Cyrus and Lil Xan's body language before their split, we should've seen it coming, which was news to me. I was completely blindsided when I heard these two had broken up. Their young love seemed so genuine, but body language expert Blanca Cobb says she's not surprised by their breakup at all.

But first, some background on their breakup drama: On September 3, Xan took to Instagram Stories to say he felt like he was being cheated on. This was reportedly based on a picture Cyrus posted with her arm around her producer, and, according to Page Six, a meme that Cyrus sent him of Charlie Puth's head on a naked body. I know. It's a lot.

Then Cyrus turned the tables, claiming he actually cheated on her. She said they hadn't seen each other in almost a week and that she actually noticed a hickey on Xan's neck during a FaceTime call. He claimed it was just a bruise. She wrote, "Cheaters like to accuse their partners of cheating to make themselves feel less guilt. This isn't the first time this has happened to me and now I'm being forced to deal with crazy accusations when I'm not even sure where all this came from." Their entire exchange since Xan accused Cyrus of cheating has been through Instagram Live and Instagram Stories. Aka, very public.

Based on some of the couple's pictures from their VMAs red carpet debut, Cobb says she feels Cyrus and Xan were disconnected, even before their very messy, very public split. "From July to August, so within a month, that’s when things are really hot and heavy and steamy for most couples," Cobb tells Elite Daily. "When you’re really emotionally connected to somebody, your body language mimics, or parrots, or copies, and it’s all done subconsciously, of your partner. You’re really connected. I’m not seeing that in these photos. Having said that, that doesn’t mean [in] every picture you have to be mirroring each other, but they’re just very disconnected." Let's see what else she has to say about the couple.

1. It seemed like they didn't want to be there.

You know when you're forced to be somewhere you really don't want to be, and no matter how hard you try to hide it, some people can just tell you'd literally rather be anywhere else? Like when you're parents drag you to Thanksgiving at their boring friend's house? That's kind of what happened at the VMAs with Xan and Cyrus. According to Cobb, their body language showed how much they both wished they were elsewhere.

"What’s most obvious to me is their feet," Cobb says. "It looks like both of them want to be somewhere else but where they are. She has one foot in front of the other. He has one heel picked up. He’s not very grounded, and that’s not how people pose for photos," she points out. "Her posture is rigid. Her shoulders are pulled back, where his are rounded. They are holding hands, and he’s leaning a little bit in front of her, but even their facial expressions are very different. She has a polite smile, where he has a bigger smile here, you can see teeth. They’re just not very connected, in my opinion."

2. They were too awkward for a new couple.

I thought this photo looked hella romantic when I first saw it, but I was wrong. According to Cobb, there's a lot of awkwardness in their body language that shows they may not have been as into each other as they led on.

"You see how her back is arched? It just looks awkward. Normally when you see a couple in love, you don’t see a rigidness to the body. From her head down to like her knees, her body is facing him it looks like, but her legs are turned out, her feet are turned out more," Cobb explains. "He’s leaning in for a kiss and he’s partially turned, and he’s not even touching her with the right hand, so in my opinion, he’s not very engaged in this kiss with her. Again, it’s just not typical for young love, for new love."

They were emotionally disconnected, and you can tell by their physical posture, Cobb says. "You can see a physical disconnect here. Sure, they’re holding hands, but notice that big space in between them. That’s not something that you typically see of couples who are in love, couples who want to be around each other, with each other. When you’re starting to feel an emotional distance, sometimes you can see that also in a physical distance, and that’s what we’re seeing in this photo," she elaborates. "His right shoulder is leaning down a little bit, more towards her, so I think there’s some level of bonding here, but in these three photos, I’m just not seeing a couple who are head over heels in love with each other."

So, there you have it. This relationship may not have been as rock solid as it seemed. Cyrus and Xan had somewhat of a bond, maybe from creating music together and being friends, but romantically, Cobb just doesn't see it. Earlier this week, Xan claimed that the relationship was a PR stunt to boost Cyrus' popularity before the release of their collaboration, "Live Or Die." And even though a Columbia Records label representative told Teen Vogue the claims were false, the disconnect in their body language screams otherwise. Here's hoping this messy breakup resolves itself soon, and that these two end on amicable terms.