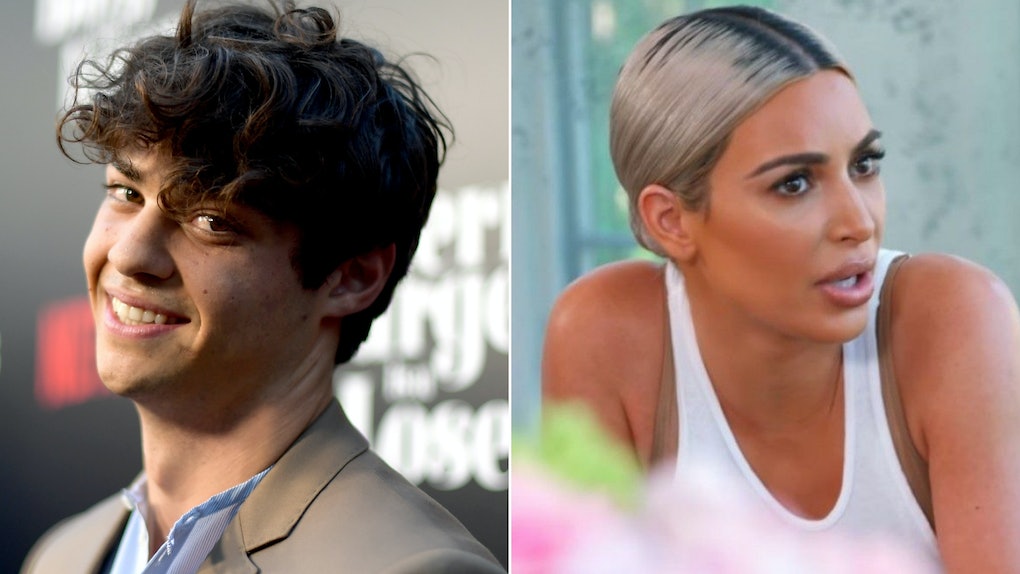 Noah Centineo is seriously everywhere right now, and that includes hanging out with reality TV's first family in Calabasas. That's right — Netflix's rom-com golden boy surprised Keeping Up with the Kardashians viewers on Sunday night by randomly popping up in the latest episode, and of course Noah Centineo's cameo on Keeping Up with the Kardashians had everyone freaking out.

Although it was a super brief cameo, Noah Centineo definitely stole the show on Sunday night's latest episode of Keeping Up with the Kardashians. Centineo was only visible for a few seconds in the background towards the end of the new episode, appearing as one of the volunteers to join the Kardashian-Jenner family at a charity event, but fans could not miss Centineo's signature shaggy hair and wide smile from behind Kris Jenner. E! also flashed a quick name card to confirm that was indeed Noah Centineo on TV screens, since he really did not get to saw much at all in the episode.

Despite the super-small cameo, fans of Noah Centineo were still totally freaking out over the little things that they did get to see him do, such as meeting Kris Jenner's boyfriend Corey Gamble and adorably playing with a kid on his shoulders in the background of one of the scenes.

Of course, viewers were quick to post all their reactions to Twitter, which was full of fans who were pleasantly surprised to see Noah Centineo randomly show up on their TV screens while they were watching Keeping Up with the Kardashians. Check out some of the responses to Centineo's surprise cameo below:

In the new episode of Keeping Up with the Kardashians, the Kardashian-Jenner family visited the Watts Community Empowerment Center, a safe haven for children in the south Los Angeles area, which the family donated to in order to help it reopen its doors with some much-needed new facilities for the children.

Noah Centineo was on hand for the Watts Community Empowerment Center reopening ceremony as well. Apparently, he was there because Centineo is close friends with Justin Mayo, who is the executive director of the non-profit Red Eye and the community center.

Although this episode of Keeping Up with the Kardashians first aired last night, it was actually filmed months before Noah Centineo actually blew up into becoming one of the buzziest actors of the year. The Kardashian family attended the Watts Community Empowerment Center reopening back in March, about five months before Centineo's big break came when Netflix's To All the Boys I've Loved Before began streaming. It is wild to think that the Centineo Keeping Up with the Kardashians viewers saw on Sunday night's episode was actually a relatively unknown actor who probably had no idea that he would become the Internet's boyfriend in a matter of months.

Noah Centineo fans can get ready to see him show up a lot more in the near future, too. Next up, he will star in two different comedy movies about dating apps — Swiped and The Stand-In — along with helming the Jackie Chan-directed drama The Diary and appearing in the upcoming Charlie's Angels reboot.

More like this
The Moment The Kardashians Decided To End 'Keeping Up With The Kardashians' Got So Emotional
By Sydney N. Sweeney
Netflix's 'Shadow And Bone' Virtual Experience Is Full Of Grishaverse Gems
By Ani Bundel
This 2-Way Mirror Theory About 'Cruel Summer' Could Explain The Whole Thing
By Rachel Varina
Stay up to date