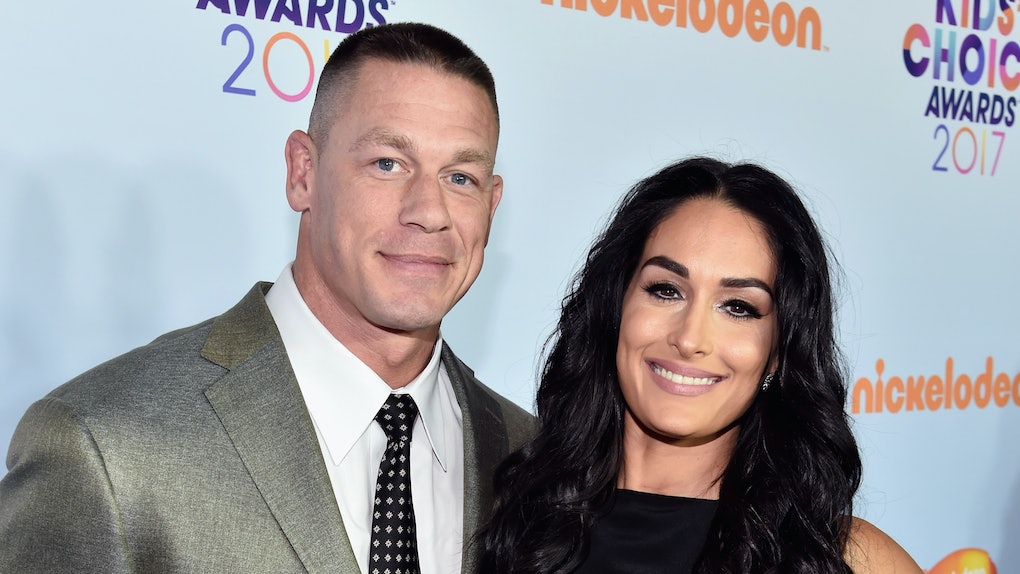 Forget the Kardashians, I'm having too much trouble keeping up with Nikki Bella and John Cena. While it seems we've been watching the couple's relationship unfold and, sadly, dissolve, on the current season of Total Bellas, it's been hard keeping up with where exactly these two stand in terms of their relationship status. While the wrestling stars broke off their engagement months ago and have been taking strides to getting back together, it's pretty obvious that these two have a lot to work on in order to get back to a healthy place. But in a new episode of Total Bellas, Nikki reveals her struggles with some of Cena's acting roles during her bachelorette party. And let me tell you, Nikki Bella's comments about John Cena's sex scenes will really make you feel for this couple who are trying to make things work.

On Sunday's episode of Total Bellas, Nikki candidly talked about her issues with John's on-screen sex scenes while she's with family and friends during her bachelorette party in Paris, France. She revealed just how much those scenes took a toll on her, and it will really make you want to just give her a hug.

While I understand that those scenes are simply a part of Cena's job, I can completely see how that affects Nikki and their overall relationship.

It must be difficult for the person you're with to bare almost everything for the camera, and, on top of showing off his butt for the movie Blockers earlier this year, back in 2015, he stripped down for a sex scene with Amy Schumer in the movie Trainwreck.

While promoting the film Trainwreck, Cena admitted that he waited a bit too long to tell Bella about the scenes that it required. In an interview with Conan O'Brien on Conan, he said:

Honestly, I didn't think I'd get the part and I kept putting it off, not telling Nicole and not having the discussion of, 'Hey, there may be some graphic scenes. So, I got it. And I couldn't say no. So I kind of walked in one day and was like, 'Hey, I'm kind of just doing this,' and that was the wrong approach.

While he said it in a joking way, he continued, and it was apparent that Nikki Bella did not think the situation itself was funny. He continued, saying, "I mean, she has such beautiful brown eyes and they glowed like red hellfire. And like she has such a great smile, but she turned into the Alien and The Predator all at once. [Instead of asking] It was more like a forgiveness thing and — note to all you guys out there — that's a bad approach."

While it sounds like he's being playful, I can see just how devastating it can be when someone in a relationship makes that big of a decision without the giving the other person a warning. And considering these two have had such an on-again, off-again relationship the last few months, it's obvious that they have a lot to work on before they make things official once more.

A source told Entertainment Tonight last month that, despite many believing that Nikki Bella and John Cena were back together, it's simply not true. The source said:

One of the reasons that they can't seem to work things out is because he's getting ready to leave the country for four months. They're not the kind of couple where it's 'absence makes the heart grow fonder;' they're more 'out of sight, out of mind,' so this distance isn't going to be good for them. They work best when they're working together and can be together all the time.

The source continued, saying, "They love each other very much and can't imagine themselves with anyone else. They want to be together and be happy, but their priority is very much on their careers right now, and they're both on the same page with that." Elite Daily reached out to Cena and Bella's teams previously for comment on the report, but did not hear back by the time of publication.

WHY MUST THE COURSE OF TRUE LOVE NEVER RUN SMOOTHLY?

Sigh. I hope that Nikki Bella and John Cena can work out their issues, because seeing the two of them together makes my heart so, so happy, and if they were to part ways for good, I feel like I, and about one million other people, would be devastated.

Nikki and John, we're rooting for you two!