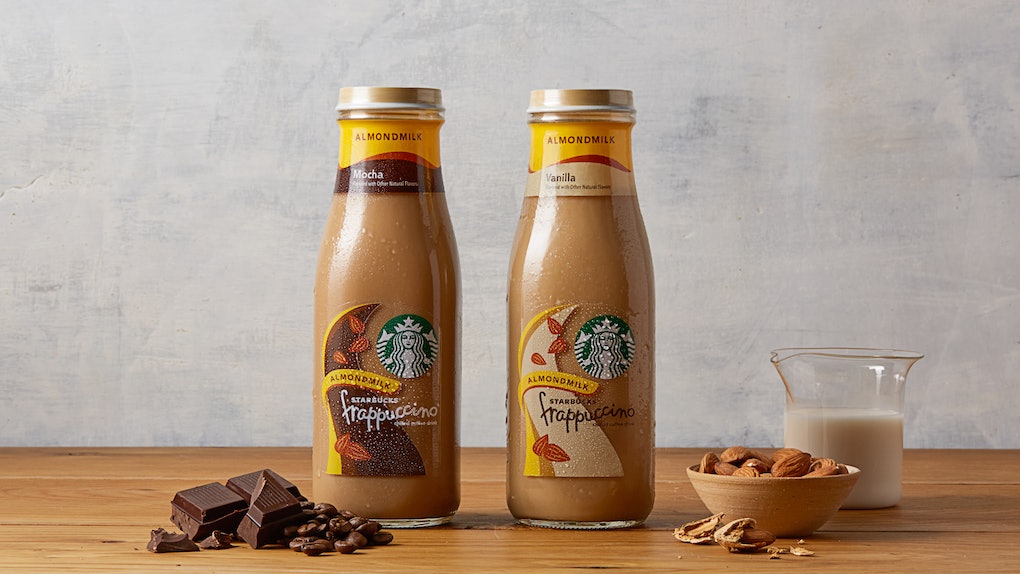 If you recently decided to get rid of your Starbucks Google alert because you thought it was maybe a bit much, you might want to go ahead and turn that back on. Your favorite coffee brand has some new offerings hitting shelves soon, and you are not going to want to miss out. That's right, new Starbucks ready-to-drink flavors are coming in 2018, ensuring that the new year will be a sweet one.

According to press release on the Starbucks website, there are three new ready-to-drink beverages that will be released in 2018. The first one will hit shelves in February 2018, and cold brew fans will definitely want to get their hands on these. Two new flavors, Vanilla & Fig and Sweetened Black, will be available with the newest single-serve, ready-to-drink release, and loyalists of the Starbucks Cold Brew won't be disappointed because, according to the press release, the flavors were inspired by the cold brew blend that is currently being served at Starbucks stores nationwide.

Remember to keep your eye out in February for the exciting new flavors of the number one single-serve cold brew on the market — what better time than the month of Valentine's Day to fall in love with your new favorite cold brew flavor? I'm looking at you, Vanilla & Fig.

If you're more of a Frappuccino fan, don't worry, Starbucks has you covered too. You might have to wait a little longer, until May 2018, but the wait will be well worth your while. The OG of Starbucks ready-to-drink offerings is getting a milky twist — almond milk, that is. The spring of 2018 will see the release of Starbucks Bottled Frappuccino Chilled Coffee Drink with Almondmilk. You'll have your choice between two delicious flavors: Vanilla and Mocha.

As if the news about ditching the dairy wasn't good enough, you'll also slash your Frappuccino calorie intake because the almond milk versions of the classic flavors contain 35 percent fewer calories than the originals. No dairy-induced bloating and fewer calories? Yes, please.

Starbucks will also be adding a brand new ready-to-drink offering in May 2018. The newest addition is called Starbucks Doubleshot Coffee Smoothies, and they're made with real fruit and almond milk. The launch of the new product will come with two flavors: Dark Chocolate Banana and Vanilla Honey Banana.

Get ready to clapback to everyone who tells you that you need to have more than only coffee in the morning. Thanks to Starbucks Doubleshot Coffee Smoothies, you can show them that you can have your breakfast and coffee in one handy drink. Feel free to keep hitting that snooze button because all you'll need to do for your morning meal come spring is twist the cap off of a bottle. Any drink that makes it OK to have chocolate for breakfast is a winner in my book.

Given that it's almost November and that your PSL intake is probably off the charts by now, it's a welcome change to look forward to what Starbucks will have to offer in the new year.

That doesn't mean you shouldn't be excited about some of the new drinks that Starbucks is offering until then. I mean, the earliest you'll be able to get your hands on one of these new ready-to-drink offerings is February 2018. In the meantime, you can keep it seasonal at Starbucks with the new Maple Pecan Latte, or get spooky with it when you order the "Franken Frappuccino."

Whatever your oder is at Starbucks this season, make sure you add "trying the new 2018 ready-to-drink releases" to your list of new year's resolutions.