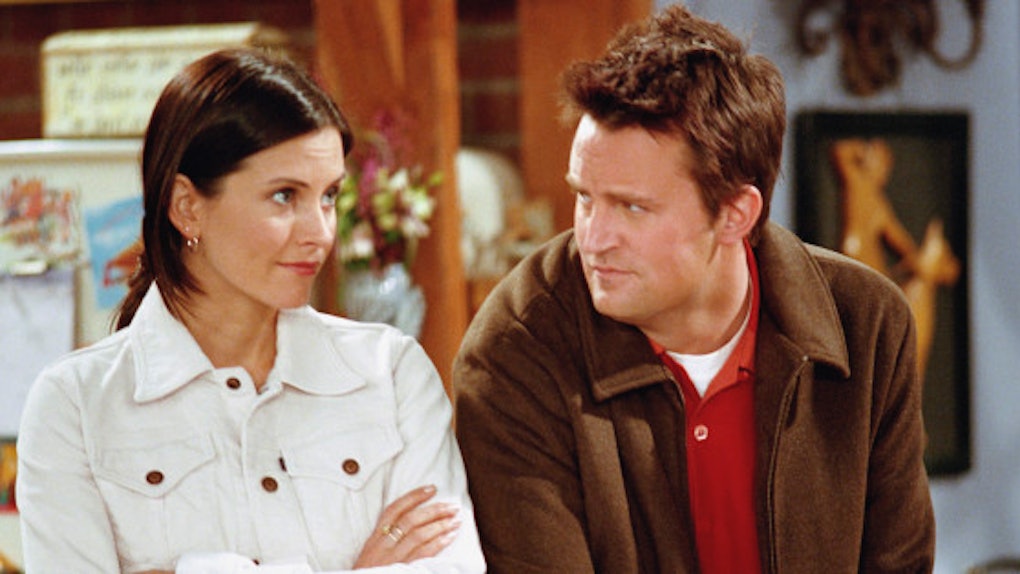 From Gossip Girl's Blair and Chuck to The Office's Pam and Jim, TV has provided us with plenty of fantastic couples to love. But, without a doubt, my favorite has always been Monica and Chandler from Friends. Their friendship-turned-romance managed to strike the perfect balance between being simultaneously aspirational and realistic. One of the most inspiring aspects of their relationship was their out-of-control great sex life. And now, BuzzFeed's new theory about Monica's "seven erogenous zones" explains just why the couple might have had such a satisfying time in the bedroom. And, trust me — any true fan of Friends will agree that the theory is pretty freaking genius.

For those of you who weren't necessarily the world's biggest Friends fans, allow me to provide you with some back story. The first thing you need to know is that Monica and Chandler were friends first, later began secretly dating, and had excellent sexual chemistry from the get-go.

BuzzFeed points us towards the fourth episode of the fifth season, "The One Where Phoebe Hates PBS," in order to make this point. In the episode, Monica and Chandler are still keeping their relationship a secret from their friends. That being said, Rachel is onto her being in a relationship with someone, so Monica has told them she's got a "secret" boyfriend. She also happens to dish to Rachel that the secret boyfriend is the best sex she's ever had.

Rachel, a total gossip, can't keep the news of her friend's great sex life to herself. She shares it with the group at the coffee shop. Chandler happens to be sitting right there and is beaming with joy.

Much like all of us, Chandler truly can't believe how in the world he was better in bed than any of Monica's sexy exes, like Richard, who is, well, super hot and sophisticated.

He's so excited that he ends up annoying Monica about it to the point where she's furious with him. Finally, he realizes he was in the wrong and says to her, "If I'm the best, it's only because you made me the best." Awwwww.

So, I've seen this episode about a billion times, as I have with every other episode of Friends, and I never stopped to think about the significance of that particular line.

Luckily, BuzzFeed pointed it out for me and now I couldn't be more livid with myself for not thinking about this earlier.

Monica literally made him the best in the 11th episode of the fourth season, "The One with Phoebe's Uterus," when she teaches him about her seven favorite erogenous zones.

Basically, Chandler is dating Joey's ex and he knows he isn't satisfying her in the bedroom like Joey did. So he turns to Monica and Rachel for help. That's when Monica teaches him about the seven zones. Apparently, she does such a good job at teaching him that his girlfriend ultimately thanks her.

Little did she know back then that she'd be reaping the rewards of her lesson just a short year later when she was the one having sex with him.

As a sex and dating writer, I've interviewed plenty of sexperts on the topic of how to have the best sex, how to improve your sex life, how to always orgasm, and so on. There's one piece of advice they give every single time: to communicate with your partner.

"It takes conversations outside the bedroom (and not in the heat of the moment) to talk about these things consciously," certified sex and intimacy coach Irene Fehr told Elite Daily. "And these conversations open the door to having more satisfaction and fulfillment for yourself and your partner without the guesswork."