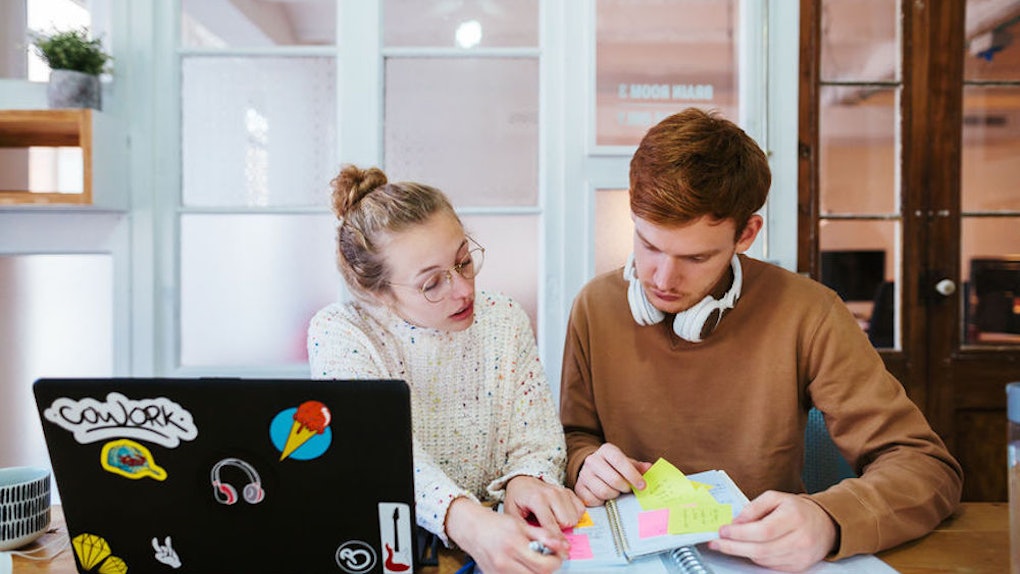 Millennials In The Workplace Can Relate To These 6 Hilarious Struggles

Being part of the "real world" means that, just like everybody else, you're doing two things: First, you're answering some of life's biggest questions like, "What do you want to do for the rest of your life?" Second, you're learning what it means to be a professional, and possibly work in an office space. You're settling into your own routines in the morning, and may complain about meetings scheduled on a Friday afternoon. There are some things that only millennials in the workplace can relate to, though — those hilarious struggles that have bonded this generation for life.

Let me make something clear. Our lives at work aren't the only thing that have brought us closer together. Social media, memes, and our love for avocado toast have really sealed the deal, too. I know that I could walk up to most millennials and have a full-blown conversation about the beautiful places they've seen around the world.

We've just created a culture that's our very own, and left a unique mark on the world. Cold brew, influencers, and the Internet truly wouldn't be the same without us. Not to mention, everybody would solely be drinking the items off of the normal Starbucks menu, and not worrying about the secret menu drinks that are so Instagram-worthy. But, these six hilarious struggles we go through at work have really bonded us. Am I right?

1. When Your Chatty Cubicle Mate Starts Talking Before You've Had Your Coffee

Imagine this: It's a Monday morning and you're walking into work, thinking about the week ahead. You know that you already have way too many meetings in your planner, and large projects that are about to be due. But, you plan on pouring yourself a cup of coffee and getting down to business. Well, that was the plan until your chatty cubicle mate started talking about what she did this past Saturday.

She goes into the play-by-play, and you're trying your best not to be rude or interrupt. She shows you pictures, and you laugh at all of her stories. In the distance, you can see your favorite mug calling your name. (Dear, cold brew. I'll be there soon. Hopefully!)

2. When You Get Put In Charge Of The Social Media Accounts

On top of being the one everyone looks to for technology problems, you often get put in charge of your office's social media accounts. Instagram, Twitter, Facebook — you run them all! And you do it with so much style and ease.

You take cool photos around the office, of people collaborating or pouring their coffee. Every once in a while, you might share a meme for all of your company's fans that are out there. You've gotten your friends to follow and like each post, and occasionally they'll leave a comment like, "Wow! So cool." Thanks for the support, fellow millennials!

3. When You Want To Explore During A Business Trip

A few times a year, you may get to go on a business trip with your office. Normally, it's to attend a conference or workshop so that you can grow your professional career and skills. Sometimes, it's to visit with people you've been virtually working with or a project site that's in progress.

You are always excited for these trips, because they mean you get to work outside of your usual environment, and see a new part of the country or world. Well, kind of. More often than not, time doesn't allow for much exploring, and you end up asking your boss, "Can we extend the trip a few days? I want to see the city!" That's the millennial in you.

4. When Somebody Else Gets To Play Music Over The Office Speakers

Some workplaces have speakers that play music all day. It breaks up the silence, and encourages creativity amongst you and your co-workers. On most days, you love it, because it makes your professional life feel a little more fun and lighthearted. But, there are some struggles that go along with this cool office feature.

Every once in a while, your boss might let someone plug their playlists into the AUX cord and the music is straight-up terrible. They're playing artists you've never heard of or would ever listen to, or radio hits that you tend to avoid.

So, instead of doing work, you spend the day trying to take over the speakers and grab the cord for yourself. You're always successful, and put on Ariana Grande's new album immediately.

5. When Nobody Understands The Meme You Sent In The Email Chain

Memes follow you wherever you go. Your group chat with your friends is filled with funny tweets and pictures of Kermit the Frog, Salt Bae, and Grumpy Cat. Your camera roll has every SpongeBob SquarePants GIF ready to go, too.

Sometimes, you break them out at work. You'll put the month's most popular meme in response to an email chain, just to lighten the mood. And a few of your co-workers will laugh from the other side of the office. But, there's always at least once response that says, "What does that mean?" Reluctantly, you explain it, knowing that only a millennial can truly understand the message you sent. The struggle can be so real!

6. When You Want Your Office Life To Feel Like A Sitcom, And It Doesn't

Last but not least, most millennials know and love a sitcom. You can quote just about any episode of Parks and Recreation, and watch reruns of The Office every night before going to bed. But, when you get to work and your life doesn't feel like Jim and Pam's in Scranton, Pennsylvania, you can't help but be a little disappointed.

You want to have a boss like Michael Scott, and laugh with your co-workers about waffles and what ridiculous thing Andy Dwyer did that day. You want to have Olympic-style competitions, and bond over conference room meetings.

Maybe one day it will be like that. Sometimes, you do share some pretty good jokes at the water cooler! Until then, you know that millennials who are also in a workplace understand your struggles. Let's laugh about them together, later, OK?