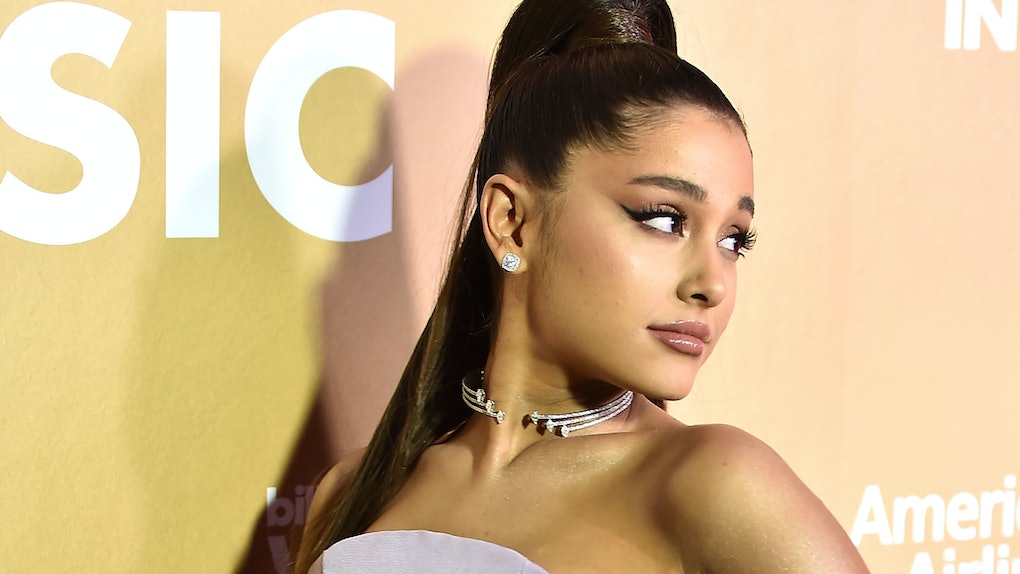 Ariana Grande just unveiled the cover art for her fifth studio album, Thank U, Next, and fans are already making memes out of it! Grande tweeted the cover art on Wednesday, Jan. 23, much to the excitement of her fans around the world. Grande’s signature upside-down photo takes center stage with a pink backdrop serving as a frame for the photo. Sounds good, right? It’s not exactly meme-worthy at first glance. But it’s the photo’s content that has fans working on memes comparing Ariana Grande’s album covers. Why? Well, Grande appears to be sleeping ...as she does in most of her album covers.

So, a little background info, first: in two out of her first four album covers, Grande looks as if she’s in a deep slumber. I’m not sure why or how that creative choice was made, but fans caught on pretty quickly and started making memes about it long before the cover art for Thank U, Next was released.

For her last album, Sweetener, Grande’s photo appeared upside down. And her photo is pretty much the same for the new album. So, of course, fans have latched on to that as being meme-worthy. Now that fans have finally seen the new album cover, they’re taking to social media once again to share their hilarious thoughts.

Here’s a look at a few of the funniest memes comparing Grande’s album covers:

As you can see, Grande’s fans are taking this whole meme thing to extremes. But it’s really done more out of love for Grande and her music than it is to ridicule her. Actually, Grande’s new single “7 Rings” which is featured on the Thank U, Next album was the subject of social media memes very recently. When the song was released on Friday, Jan. 18, fans flocked to social media once again to share their best memes. Apparently, the song’s lyrics added to its meme-ability. Here’s a look at some of the lyrics for “7 Rings”:

Yeah, breakfast at Tiffany's and bottles of bubbles / Girls with tattoos who like getting in trouble / Lashes and diamonds, ATM machines / Buy myself all of my favorite things (Yeah) / Been through some bad sh*t, I should be a sad b*tch / Who woulda thought it'd turn me to a savage? / Rather be tied up with calls and not strings / Write my own checks like I write what I sing, yeah (Yeah)

Basically, the song is Grande talking about how wealthy she is and how she’d rather be spending money on herself and her friends than be attached romantically. Here’s another verse of the song:

Wearing a ring, but ain't gon' be no "Mrs." / Bought matching diamonds for six of my b*tches / I'd rather spoil all my friends with my riches / Think retail therapy my new addiction / Whoever said money can't solve your problems / Must not have had enough money to solve 'em / They say, "Which one?" I say, "Nah, I want all of 'em" / Happiness is the same price as red-bottoms

And here are the memes that resulted from lyrics like that:

Obviously, Grande’s work has a meme-worthy quality to it that other artists’ work doesn’t have. But she seems to take it all in stride. And, frankly, it’s worth the laugh!

More like this
These Tweets Comparing SuperM's "We Do" To BTS' "Dynamite" Video Are So Split
By Michele Mendez
These Tweets About BTS' 'Bang Bang Con 2021' Sum Up The Epic Performance
By Cianna Garrison
With 'Like Water,' Wendy Found Her Biggest Cheerleaders In Her Red Velvet Bandmates
By Michele Mendez
Stay up to date