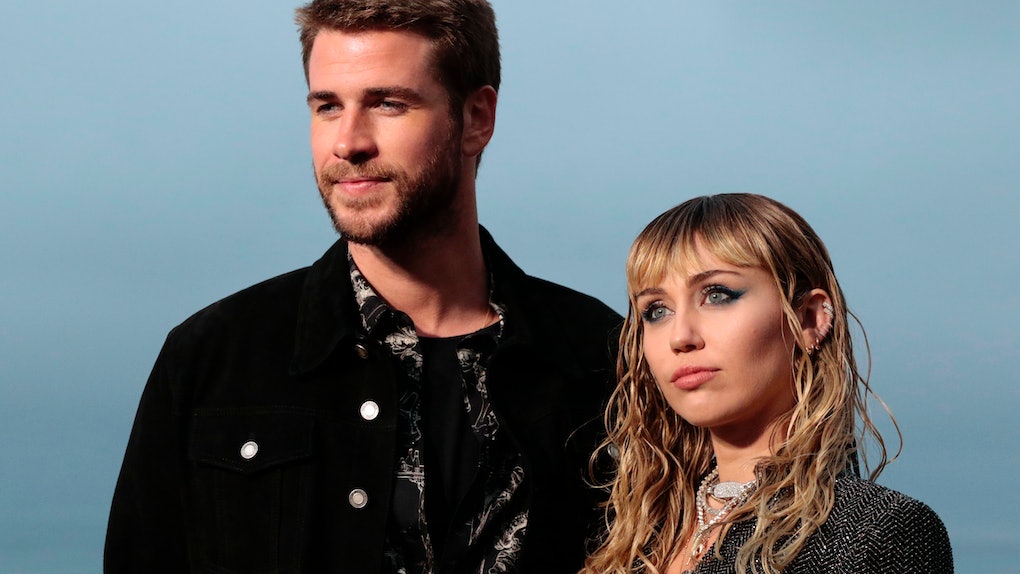 Miley Cyrus' "Freedom" Tattoo Might Be A Snub At Liam Hemsworth

Um, have you guy seen Miley Cyrus' "freedom" tattoo yet? The tattoo first made its Instagram debut on Dec. 7 on the account of famous celeb tattoo artist Daniel Winter, also known as Winter Stone. The post in question was a carousel featuring two separate black-and-white images of Cyrus' tat. The first image focuses on the actual tattoo, which writes "freedom" in beautiful cursive just below her knuckles. The second image is a selfie of Winter and Cyrus with Cyrus holding her fist to her face to show off the fresh ink. The "freedom" tattoo has some fans (me, I'm "some fans") wondering if the ink is a nod to her split from Liam Hemsworth.

In case you've been without internet access for the past three months, let me catch you up: A rep for Cyrus officially announced their split to People on Aug. 10. Hemsworth reportedly filed for divorce less than two weeks following the announcement, according to TMZ. Since then, he's has maintained a relatively low profile, though he's been linked to actress Maddison Brown, while Cyrus has gone on to publicly date Kaitlynn Carter and Cody Simpson.

So, this "freedom" tattoo could be referring to her love of spontaneity, wide open spaces, and no strings attached... or maybe it's a nod to one of her famous exes.

The "Slide Away" singer and her new boo Simpson have each seemingly shaded Hemsworth by alluding to some sort of trouble in Cyrus' romantic past. "I’m very, very, very romantic," Simpson said during an Oct. 22 appearance on Australia's Kyle & Jackie O Show. "I don’t think [Cyrus]... she’d talked about how she hadn’t had that kind of an experience in a relationship before." During one controversial Instagram Live alongside Simpson she posted on Oct. 20, Cyrus explained that she thought she "had to be gay" because she believed "all guys were evil," but Simpson taught her that men can be good people too. (Cyrus issued a Twitter apology to the LGBTQ+ community shortly after posting the video).

So, yeah, you could see how some of those shady comments about her past might have fans thinking that the "freedom" tattoo was inspired by her breaking free from her relationship with Hemsworth. That being said, the caption on Winter's post paints a different picture of the story:

It's the second hashtag there that should really capture all of our attention. "Mother's Daughter" is Cyrus' song that was released two months before her split from Hemsworth. With a chorus featuring the lyrics, "Don't f*ck with my freedom/I came back to get me some," the song revolves around the importance of freedom.

So, maybe this tat is open to interpretation. Regardless of what it means, it looks perfect on her.