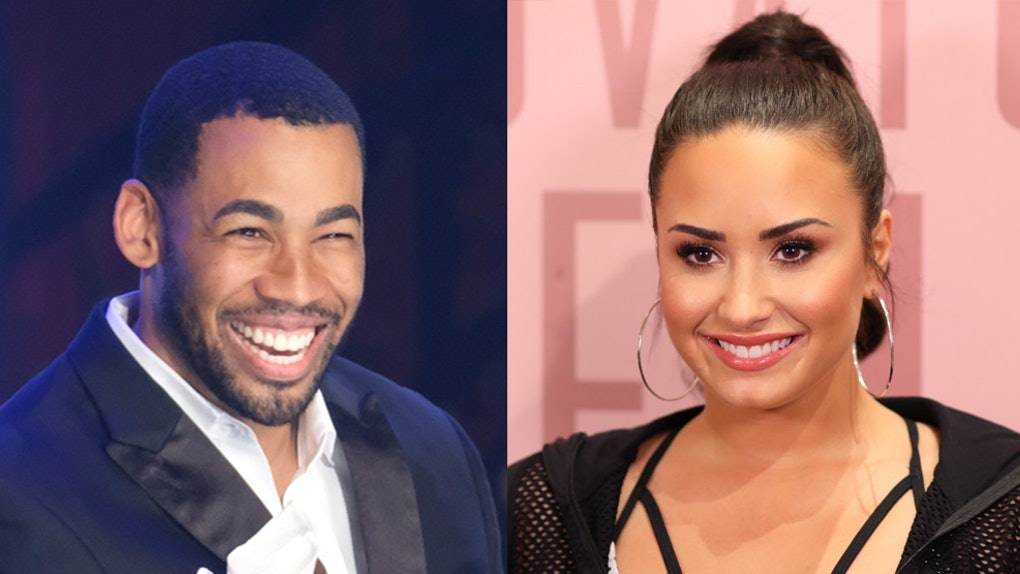 Mike Johnson may not be the new Bachelor, but it may just be a matter of time before he becomes Demi Lovato's new man. If you've ever been nervous about sliding into someone's DMs, the courtship between these two proves that social media flirtation can actually lead to IRL chemistry — who knew? After months of flirty tweets and one very telling Instagram comment, The Bachelorette and Bachelor in Paradise alum and the singer met up for dinner in Los Angeles, and Mike Johnson's Bachelor Happy Hour quotes about Demi Lovato made it clear that he was definitely feeling it.

During his Sept. 19 appearance on the podcast Bachelor Happy Hour with Rachel & Ali — as in, former Bachelorettes Rachel Lindsay and Ali Fedotowsky-Manno — Johnson got candid about Lovato and their love connection. "When Demi and I are together, it’s laughter and we talk about real sh*t," Johnson revealed. "Like, she’s a down-to-earth woman and I respect it so much. And she’s just a really humble, really cool, really fun, down-to-earth person." But when pressed about their relationship status, Johnson played it coy. "My status of the relationship with Demi and I are that we are two people exploring each other," he said. C'mon, Mike. I need more than that!

While Johnson said on the podcast that he and Lovato have actually "met more than one time," it was their reported date in Los Angeles a few days before his Happy Hour appearance that first got everyone's attention. A source told E! News that the two were spotted having an intimate dinner together, where Johnson reportedly had Lovato "laughing the entire date." The source also added that Johnson and Lovato had already made "plans to see each other again soon." Though I don't know whether that dinner date was their first date, Johnson definitely made it clear it hasn't been their only date.

On the podcast, Johnson admitted he was "annoyed" and "sad" at first about not getting picked as the next Bachelor, but after some reflection, he realized not being selected might be for the best. "...I was appreciative and thankful that they told me no right then and there," he explained, "because now I could focus on myself, and I’m just blessed because I know I’m gonna find my wife and find my claim." And perhaps feel free to explore a relationship with Lovato?

Johnson did tweet back in July that his future wife should be "ready for smiles, adventure, comfort, growth, honesty, laughter, me falling using my inhaler and kissing your stretch marks and imperfections," and I think Lovato would be down for all of that. Rachel Lindsay changed the subject to Lovato soon after Johnson made this proclamation, so apparently she was thinking the same thing I was.

Lovato has never held back about expressing her attraction to Johnson, but it seems as though Johnson is finally returning her not-so-subtle affections. "She’s an extremely sweet woman," Johnson told Lindsay, noting that they were both from Texas, too, which gave them even more reason to connect. I don't know yet how serious these two are about each other, but I do know this: Lovato and Johnson's budding relationship deserves all the roses.