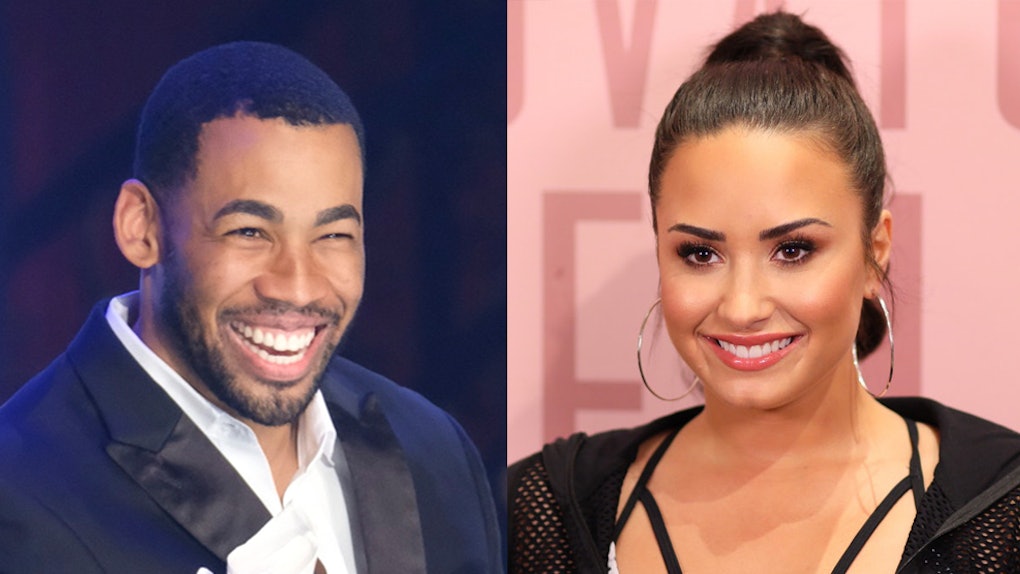 If you were bummed that Mike Johnson got passed over to be the next Bachelor, first of all, same. But, good news: It seems like he's going to be just fine after all, at least if the rumors that Demi Lovato and Mike Johnson’s reported date went really well are true. Sources reportedly told E! News that the two reportedly met face-to-face, and their IRL connection was "instant." I'm not freaking out, you're freaking out.

While this rumored romance is unfortunately not being televised (would totally watch that show, by the way), a source reportedly offered E! News an inside scoop on this budding reported romance. According to the insider, Lovato and Johnson reportedly recently met up for a dinner date in Los Angeles, and he reportedly had her "laughing the entire date," which the source confirmed Lovato "loves." The source also reportedly revealed that Lovato reportedly felt instant chemistry with Johnson. "She has always had a huge crush on Mike and once they met in person, there was an instant connection." I don't know about you, but I'm just so glad to finally see Johnson get the love and appreciation all of Bachelor Nation has known he deserves all along.

If that's not enough to get excited about, the same reported source says this reported date is likely just the start of these two heating up. "They have plans to see each other again soon and Demi is really excited about it," the insider reportedly revealed to E!.

Those paying attention to Lovato and Johnson's social media profiles probably aren't surprised these two have a reported love connection, as they've done a little high-key flirting online. It all started when Lovato made it clear who her favorite Bachelorette contestant was during Hannah Brown's season, saying "Mike I accept your rose" on her Insta Story.

Word got back to Johnson that he had a famous fan, and he was flattered, telling E! "It made me feel sexy... It made me feel good. It's pretty awesome; it's pretty cool, I'm not gonna deny it," adding he wasn't intimidated by the thought of meeting up with Lovato in person. "She is still a human being, just like I am, and if we were to meet up I'm not gonna be giddy at all. I'm [going to be like] 'What's up, sexy? You got a nice little booty on you. Let's talk,'" he said.

Johnson reiterated his love for Lovato's bum when she posted an unedited photo of her showing off her assets on Instagram. She posted the photo as way of publicly embracing her body. "I’m just literally sooooo tired of being ashamed of my body, editing it (yes the other bikini pics were edited — and I hate that I did that but it's the truth) so that others think I'm THEIR idea of what beautiful is, but it's just not me. This is what I got," wrote Lovato. The post won her the praise and support of fans, including Johnson, who left a flirty comment on the pic saying, "Look at me like that again… Love yaself." This earned him a kissy emoji in response. The rest, it seems, is reportedly history.

As for what the future holds for these two, only time will tell, but it doesn't seem like Lovato is trying to rush into anything. As the reported source reportedly explained to E!, "Demi is not looking for anything serious right now but is staying open and is excited to see Mike again." Needless to say, I'm rooting for these two, and I can't wait to see what happens next.

More like this
Did Zac Clark's Mom Unfollow Tayshia Adams? It's Not That Deep
By Lydia Wang
Kaitlyn Bristowe’s Quotes About Hosting ‘The Bachelorette’ Are So Honest
By Lydia Wang
Is Katie Thurston Engaged After 'The Bachelorette'? Her Instagram Is Sus
By Joyann Jeffrey
Stay up to date