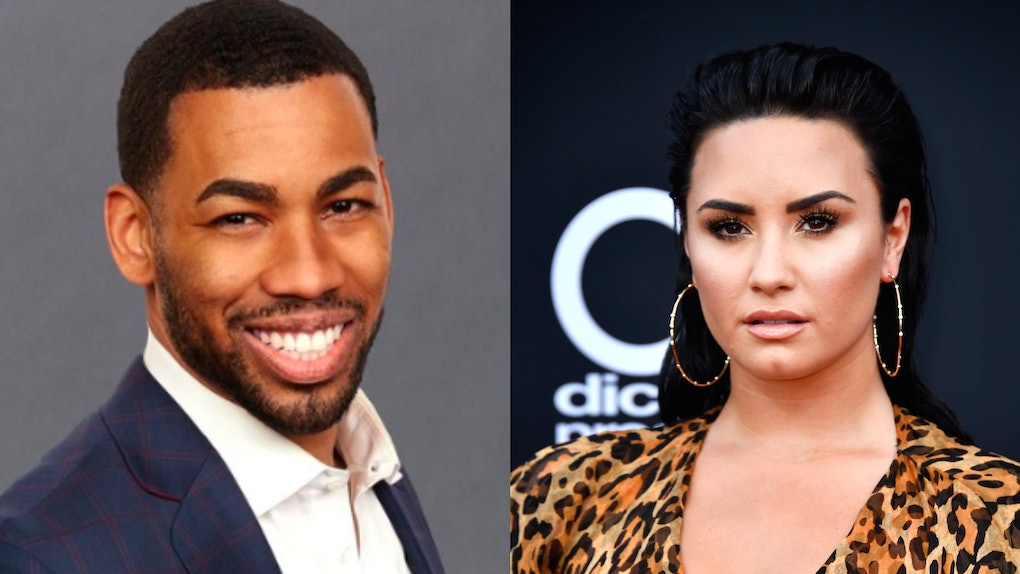 Demi Lovato & Mike From ‘The Bachelorette’ Are Reportedly Hanging Out, So Things Are Heating Up

There's always so much juicy gossip to keep up with in the celeb world. I'm always wondering what stars are up to, especially who they're dating. The latest hints at a celeb coupling may be unexpected, but I'm pleasantly surprised. Demi Lovato and Mike from The Bachelorette are hanging out, according to a new report, so it seems like things are heating up quickly.

A source told PEOPLE that singer Demi Lovato and former Bachelorette contestant Mike Johnson are "having fun and getting to know each other." The source added, "They've been talking privately for a bit and hanging out." Elite Daily reached out to reps for both Lovato and Johnson for comment on this report, but did not receive a response by the time of publication.

It sounds like Lovato and Johnson totally have the hots for one another. The two already set the stage for their IRL hangouts with some super flirty banter on social media recently. Earlier this month, Johnson commented on Lovato's unedited bikini pic on Instagram. The swimsuit photo showed off the 27-year-old singer's body and was accompanied by a confident statement about accepting one's self, imperfections and all. Lovato wrote in the post: "I want this new chapter in my life to be about being authentic to who I am rather than trying to meet someone else's standards. So here's me, unashamed, unafraid and proud to own a body that has fought through so much and will continue to amaze me when I hopefully give birth one day."

It's so inspiring to see Lovato proudly flaunt her natural womanhood, and it seems like Johnson totally did too. He commented, "Look at me like that again. Love yaself," with a flirtatious winky emoji. Lovato responded with a kissy face and tongue-sticking-out emoji, which totally fueled rumors with fans that something was brewing between her and the Bachelorette alum.

Another past clue that points to a romantic connection between the two is Johnson's recent comment on fellow Bachelorette alum Tyler Cameron's Instagram. He wrote, "So if we do this [double] date, your shirt stays on." Since things are hot and heavy between Cameron and model Gigi Hadid, the double date suggestion must be implying a rendezvous with the four celebs, right? Fans definitely seem to think so. Especially since Lovato made it very clear that she was crushing hard on Johnson while watching this past season of The Bachelorette.

But Johnson squashed rumors of a romance last month on Aug. 19, telling PeopleTV's Reality Check that he had "not connected" yet with the singer. He explained, "She would definitely be cool to reach out to, but neither one of us have reached out to each other." He continued, "I think she's sexy, she's got a nice little booty on her and she has a good voice."

Johnson may have been telling the truth a month ago about not yet connecting with Lovato, but I totally believe that things can heat up quickly — especially since there was already initial attraction and online flirting. There's no reason why the pair wouldn't take it to the next level by spending time together. After all, it's still the best way to gauge an authentic romantic connection. It's too early to tell if this will all end with another Hollywood couple walking down the aisle, but I'm sure hoping Johnson will get the final rose this time.