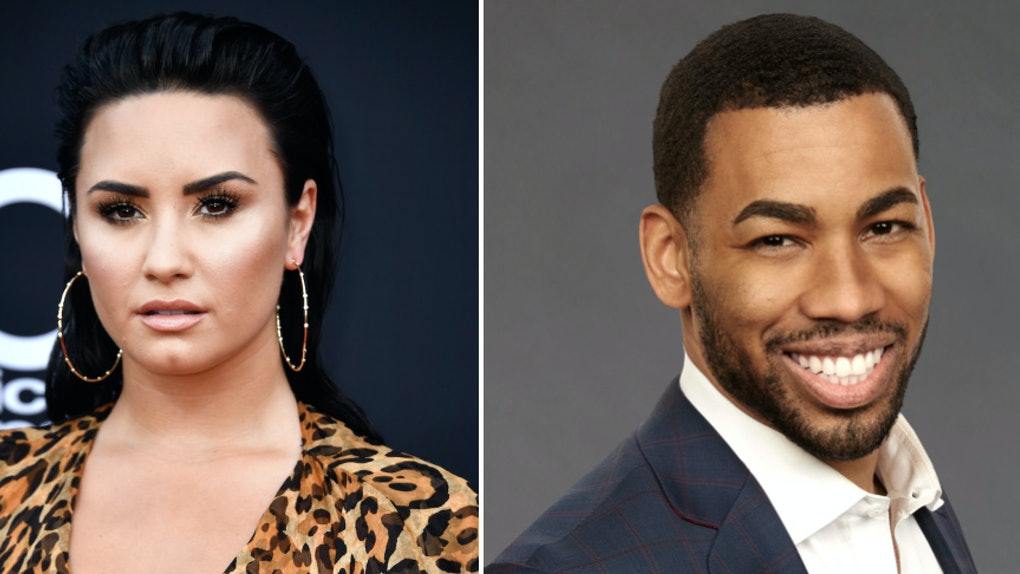 The latest season of The Bachelorette was a mess, but I think most people can agree on two things: Hannah Brown should have chosen Tyler Cameron over Jed Wyatt, and Mike Johnson should have lasted way longer than he did. Though it's not looking like Johnson is going to be the next Bachelor, there is someone who's been rooting for him since the very beginning: Demi Lovato. As it turns out, that affection might be mutual. Mike Johnson's comment on Demi Lovato's bikini Instagram is super flirty (and proof that there's nothing wrong with being confident).

Lovato named Johnson as her top pick early on in Brown's season of The Bachelorette. In an Instagram Story showing the scene where Johnson called out Luke Parker for claiming to love Brown after the first group date, Lovato could be heard in the background saying, "He should win," in reference to Johnson. When Johnson did not receive a rose later in the season, Lovato again included the scene in an Insta Story along with her commentary. "Swing me, kiss me! Boo boo," she gushed. She even wrote, "Mike, I accept your rose" in one of her Stories. Rather than a rose, Johnson offered a flirty comment on her recent Instagram post instead.

"I want this new chapter in my life to be about being authentic to who I am rather than trying to meet someone else’s standards," Lovato said in her lengthy and empowering Instagram caption. Johnson responded, "Look at me like that again," along with a smirky face. "love yaself." Seriously, what's hotter than a person who loves to see you shine?

After Johnson was sent home, he posted a tweet on July 1 making it clear that he was still on the hunt for love. "Jus saying, my future wife though," he said, "girl you ready for smiles, adventure, comfort, growth, honesty, laughter, me falling using my inhaler and kissing your stretch marks and imperfections. Where u hiding." Fans were quick to point out that his dream woman was ready and waiting for him — as was Lovato herself. "I'M RIGHT HERE MIKE I'M RIGHT HERE BOO MY MOM ALREADY LOVES YOU TOO," she tweeted in response.

When asked by People what he thought of Lovato's not-so-subtle crush, Johnson said, "She would definitely be cool to reach out to, but neither one of us have reached out to each other," later adding, "I think she's sexy, she's got a nice little booty on her, and she has good voice." Johnson also told Us Magazine he was into the idea of lovin' on Lovato. "I’m flirting with her, too. Tell her, 'What's up, baby?'" Johnson joked at the Men Tell All taping. "I would definitely take her out for an initial date, yeah. One hundred percent not scared about it at all. I would be like, 'Oh my God! Girl, come here.'"

However, as of Aug. 19, the two still had not spoken to each other directly. "We have not connected and we have not exchanged any freaky texts at all," Johnson assured People with a smile. "No to both." Perhaps that sexy leopard-print bikini will give Johnson the push he needs to slide into Lovato's DMs. Shoot your shot, Mike — we're all rooting for you!