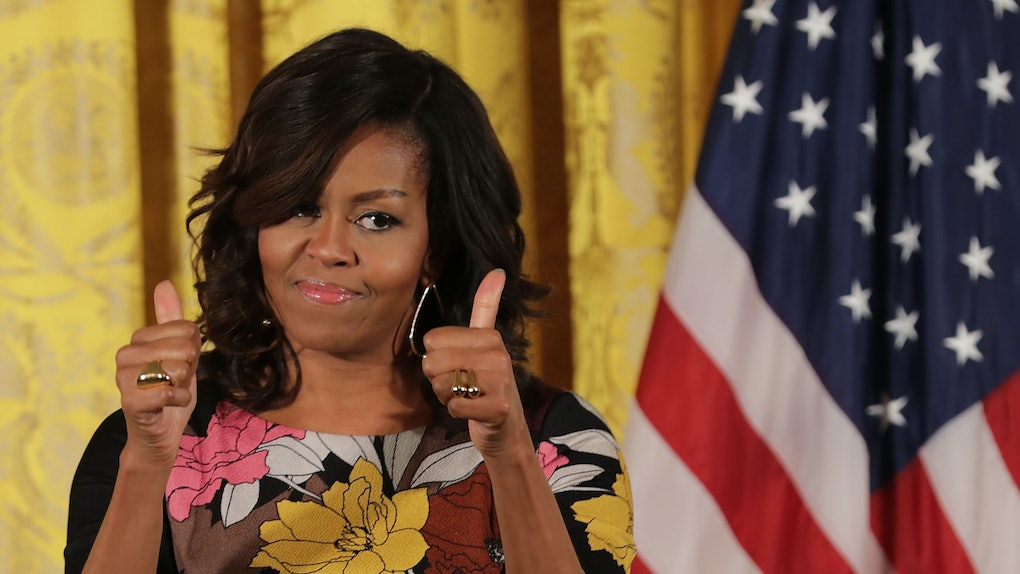 Donald Trump's inauguration on Jan. 20, 2017 was a spectacle in many ways, but an undisputed scene-stealer was first lady Michelle Obama. Though she appeared poised and gracious in front of cameras (for the most part), Michelle Obama's thoughts after Donald Trump's inauguration were apparently all, "Bye Felicia." That's at least what she said during a Dec. 18, 2018 appearance on The Tonight Show.

The revelation came after host Jimmy Fallon held up a photo depicting her and President Barack Obama boarding a plane after the inauguration and waving to the cameras. "Bye, Felicia," she quipped, sending Fallon and the audience into laughter. When he asked her if that was actually going through her mind, Obama added, "A lot was going on that day. That was a day." From the inauguration itself, to a sudden sleepover request from her daughter's friends the night before, to the impromptu gift that Melania Trump gave her on Inauguration Day, it was just too much to handle, Obama explained.

Still, she expressed that she's optimistic of the future of the country, saying that older generations owe young people "hope" and "optimism." She explained:

Everywhere I go, I get to see young people. And we owe young people that optimism, that hope, because what’s the alternative? And they come into this world ... with so much promise.

You can watch those comments, including the sass, starting around the 3:20 mark:

Her feelings regarding Trump's inauguration had previously been all-but confirmed when she was spotted giving some side-eye during the event. She later opened up about her expression in her recently released memoir Becoming, writing that she couldn't even try to be happy that day. An excerpt reads, per CNN:

Someone from Barack's administration might have said that the optics there were bad, that what the public saw didn't reflect the President's reality or ideals, but in this case, maybe it did. Realizing it, I made my own optic adjustment. I stopped even trying to smile.

She also wrote in the book that some of her disdain for the president stems from his role in spreading "birther" conspiracies about President Obama. In case you were living under a rock before 2016, Trump used to repeatedly tweet his belief that Obama, who was born in Hawaii, was not born in America, and called on the then-commander-in-chief to produce a birth certificate to prove otherwise. It was a total mess — and it was everywhere. Elite Daily previously reached out to the White House for any comment on Trump's "birther" claims, but did not hear back. But Obama wrote that she'll never forgive him for the way the claims put her family at risk. She explained in the book:

The whole [birther] thing was crazy and mean-spirited, of course, its underlying bigotry and xenophobia hardly concealed. But it was also dangerous, deliberately meant to stir up the wingnuts and kooks. What if someone with an unstable mind loaded a gun and drove to Washington? What if that person went looking for our girls? Donald Trump, with his loud and reckless innuendos, was putting my family’s safety at risk. And for this I’d never forgive him.

Trump, of course, didn't take the comments lying down. Speaking to reporters after they surfaced, he said:

I guess she wrote a book. She got paid a lot of money to write a book. And they always insist that you come up with controversial — well, I’ll give you a little controversy back. I’ll never forgive him [Barack Obama] for what he did to our United States military. By not funding it properly, it was depleted.

I'm just gonna take a wild guess that petty comments like these are part of the reason she's not exactly fond of him. But hey, at least she knows how to put on a good poker face when she needs to.