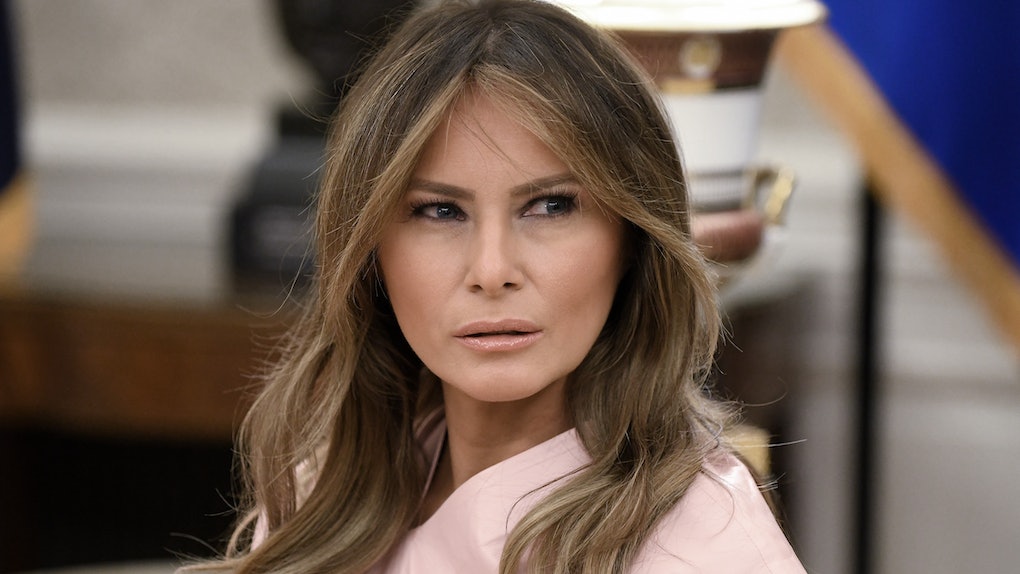 It doesn't matter how meticulous you may be when trying to write a message — sometimes mistakes just find a way to happen. That's what happened to the first lady on July 4, when she tried to send out a tweet in honor of Independence Day. Although the message was pretty spirited and festive, unfortunately for her, everyone noticed the typo in Melania Trump's Fourth of July tweet, and quickly pointed it out in her @ mentions.

Trump took to the social platform to celebrate the Fourth of July by sharing a thoughtful message with her followers. Everything looked OK at first glance, but upon closer examination, many people noticed that there was a typo in her post. Instead of writing the word "Independence" in Independence Day, Trump incorrectly spelled it with an "a" — as in "Independance." Yikes.

The full, and now-deleted, post from the first lady read: "Happy #IndependanceDay. May God bless this great nation & all the people who protect it!"

It was pretty embarrassing considering the significance of the holiday, but luckily, the post was was deleted just eight minutes later and replaced with #IndependenceDay spelled correctly, according to USA Today.

But in Trump's defense, #IndependanceDay was already trending on Twitter, so she could've made the mistake unknowingly by clicking and tweeting from the hashtag. It seems like a pretty feasible idea, as many others had the same misspelling in their Fourth of July tweets, including the U.S. Air Force and the City of Boston.

See? Common mistake. Besides, her husband probably caught the most jokes and backlash for his own Fourth of July tweet anyway.

Donald tweeted a video to pay homage to "American heroes" earlier in the day, including General George Washington and his "army of brave patriots" who he said helped America win its independence years ago.

General George Washington and his army of brave patriots fought a long tough war with the British to win America’s freedom, win they did …together as we celebrate the Fourth of July with friends and family let us never forget that our freedom has been earned through the blood, and sweat, and sacrifice of American heroes.

The president concluded his tribute by saying, "We are — and will always be — one people, one family, and one glorious nation under God. Happy Fourth of July, and God bless America."

His remarks ignited tons of backlash, with many people slamming Donald for apparently not living up to the efforts made by his forefathers. Others labeled him as a hypocrite for praising the writers of the Declaration of Independence (who were immigrants), while implementing harsh policies on immigration, including the highly controversial "zero tolerance" policy. I mean, people were pissed.

So he's really got his wife beat when it comes to embarrassing Fourth of July tweets, don't ya think?

Donald has also made constant typos and grammatical mistakes throughout his presidency, which surely outweigh those of his wife. Most recently, he made a mistake while bragging about his "ability to write," and it truly cannot get any more awkward than that.

He posted the tweet on July 3, where he lashed out at the press and public for calling out his Twitter typos. But there was a misspelling in that very tweet. Instead of writing that the media "pores" over his tweets, he said they "pour" over them. *facepalm* The tweet, which has since been deleted, read:

After having written many best selling books, and somewhat priding myself on my ability to write, it should be noted that the Fake News constantly likes to pour over my tweets looking for a mistake. I capitalize certain words only for emphasis, not b/c they should be capitalized!

Oh, and don't even get me started on the time he made up that "covfefe" word!

Maybe we should all just agree to make sure we're taking our time to do thorough spelling and grammar checks from today on out. Who's with me?