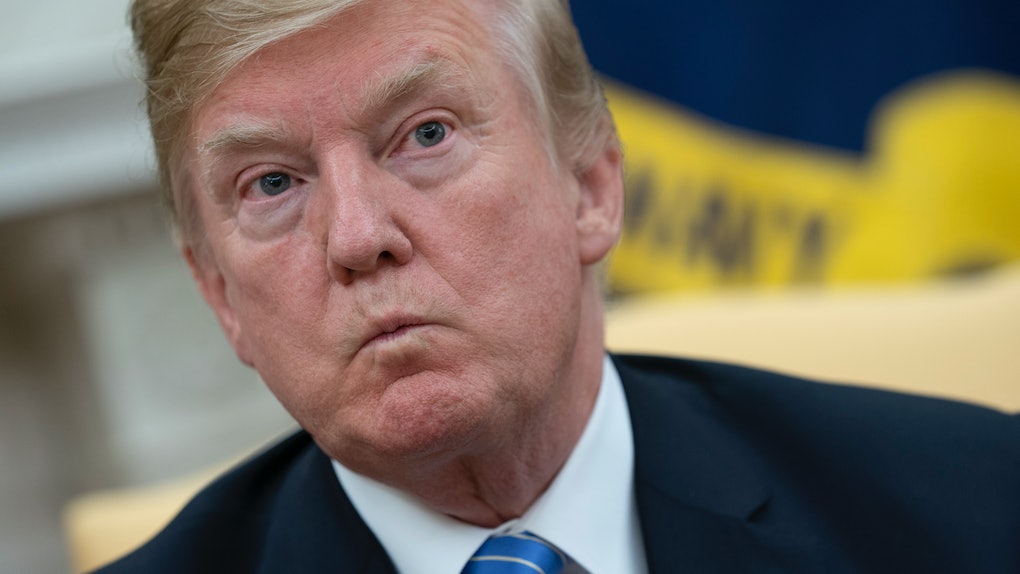 President Donald Trump isn't exactly what I would call a wordsmith. When he has a speech prepared that's written by his staff I expect there to be a certain degree of presidential professionalism from Trump. His tweets and off-the-cuff speaking engagements, however, are another thing entirely. I don't expect much from Trump's tweets or his rallies that he still holds across the country — but when he makes a major mistake (and one that happens to be hilariously ironic to boot), the world can't help but notice it. For example, Donald Trump's tweet about his "ability to write" has a typo in it, which is both funny and kind of sad at the same time.

Trump posted a tweet on July 3 where he attacked the press and the public for constantly looking for mistakes in his tweets. Well, in that very tweet, the president made a mistake. Instead of saying that the media pores over his tweets, Trump said that they pour over them. The full (and now-deleted) tweet from Trump read as follows,

After having written many best selling books, and somewhat priding myself on my ability to write, it should be noted that the Fake News constantly likes to pour over my tweets looking for a mistake. I capitalize certain words only for emphasis, not b/c they should be capitalized!

Even though the original tweet was replaced with a new sans-typo version of the same message, the internet is written in ink, and of course the Twitterverse made sure to point out the laughable mistake.

Merriam-Webster Dictionary's official Twitter account took the liberty to expertly troll Trump's mistake with a tweet of their own. The dictionary company decided to explain the difference between "pour" and "pore" in the absolute funniest way.

The tweet reads that to "pore over" means "to read or study very carefully"; that a "pour over" means to "make expensive coffee"; and that a "comb over" means to "comb hair from the side of the head to cover the bald spot."

Shaaaade. I cannot and will not ever get enough of this tweet.

Boom — not only did Merriam-Webster school Trump in the English language, they also managed to throw in a joke about Trump's signature coiffure. Now that is what I call an expertly crafted burn.

Another detail about this tweet from Trump that's ironic is that he claims to have written "many best selling books." It's true — his books have been on best seller lists. The only problem is that he supposedly hasn't actually written any of them. Tim O’Brien, the writer of the Trump biography TrumpNation: The Art of Being the Donald, also responded to Trump's tweet, claiming Trump didn't even write the books that he's bragging about in the tweet. In O'Brien's tweet from July 3 he states, "President Trump didn’t write any of his books. Ghostwriters on all of them."

According to The Hill, the president has a ghostwriter or co-author credited on almost all of his books, so while it's possible that Trump may have had a hand in writing a couple of his titles, it looks likely that he didn't do the bulk of the work. However, ghostwriters aren't always credited as writers of their work, so hey, who knows what Trump actually did.

In any case, these simple typos and boasting in Trump's tweets have become so incredibly common that I'm not surprised by anything he writes in those tweets anymore. But when a mistake as hilarious as the one he made today happens, I can't help but take notice. It's little comic relief moments like this that make living in 2018 just a touch more bearable.