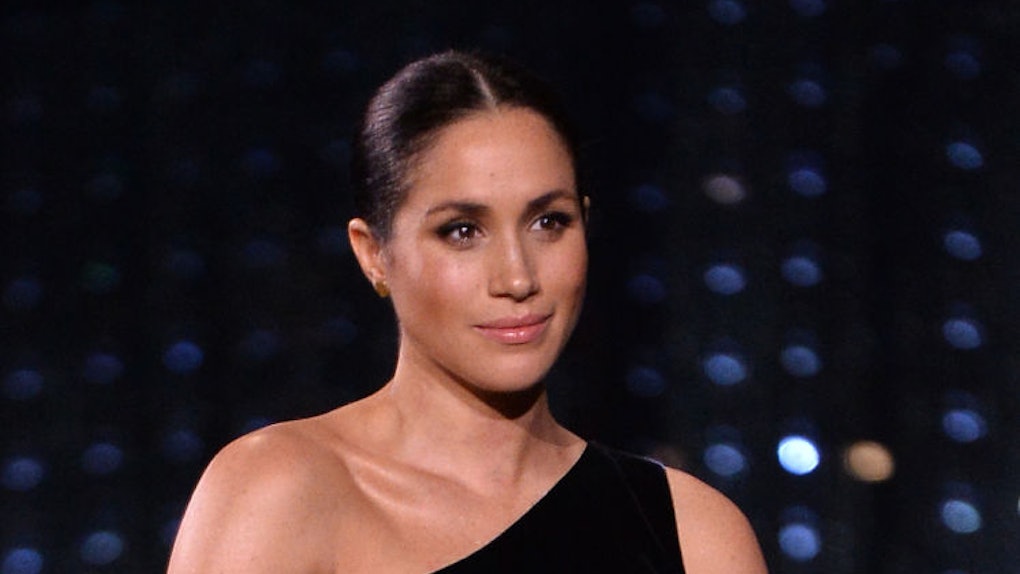 Awards shows are some of the best places to spot truly incredible and inspired fashion. From the Grammys to the CFDA Awards, they're events that demand sartorial excellence. Excellence like Meghan Markle's dress at the British Fashion Awards, which stunned the crowd of attendees last night for more reasons than one. Just before the award for British Womenswear Designer of the Year was announced, Rosamund Pike, who was set to reveal the winner, called a very special royal guest on stage to do the honors, much to the delight of the event's guests. And as soon as Markle took to the stage in her stunning black gown, the excitement only elevated.

"As all of you in this room know, we have a deep connection to what we wear," began Markle after hugging Pike and greeting the crowd. "Sometimes it's very personal, sometimes it's emotional. But for me, this connection is rooted in really being able to understand that it's about supporting and empowering each other, especially as women. When we choose to wear a certain designer, we're not just a reflection of their creativity and their vision but we're also an extension of their values of something in the fabric so to speak that is much more meaningful."

As someone who is constantly in the spotlight and has become a true fashion icon, Markle knows a thing about the power of style. It seems like not a day goes by where she's not mentioned in the news for her latest ace look, and her custom Givenchy wedding dress was perhaps one of the biggest fashion industry talking points of 2018. So when she announced that Clare Waight Keller, artistic director of Givenchy and designer of Markle's wedding gown, had won the Womenswear Designer award, you can imagine the emotional acceptance that followed.

"I feel especially proud to announce tonight's winner who yes, is a British designer leading on the global stage with vision and creativity but also with incredible kindness, which is why when I met her for the first time 11 months ago, I knew that we'd be working very closely together. The winner this evening is Clare Waight Keller," Markle said.

For the big night, it was only right that Markle wear—you guessed it—a custom gown by Givenchy. (Would you expect anything less?) Featuring an elegant one shoulder neckline and sweeping hemline, it was refined simplicity at its absolute chicest. The fitted silhouette showed off Markle's baby bump, while three gold bangles stacked up her right arm served as the perfect accents and accessories. Like her wedding dress, which was a surprise for its relatively minimal design, the black gown proved that sometimes less is more. In this case, it was perfection.

For her beauty look, Markle opted for a sleek low bun and her signature natural-looking makeup. Her nails were painted a shiny shade of black, which perfectly complemented the dress, and subtle studs adorned her ears. Again, less was more—and I honestly can't get enough of it!