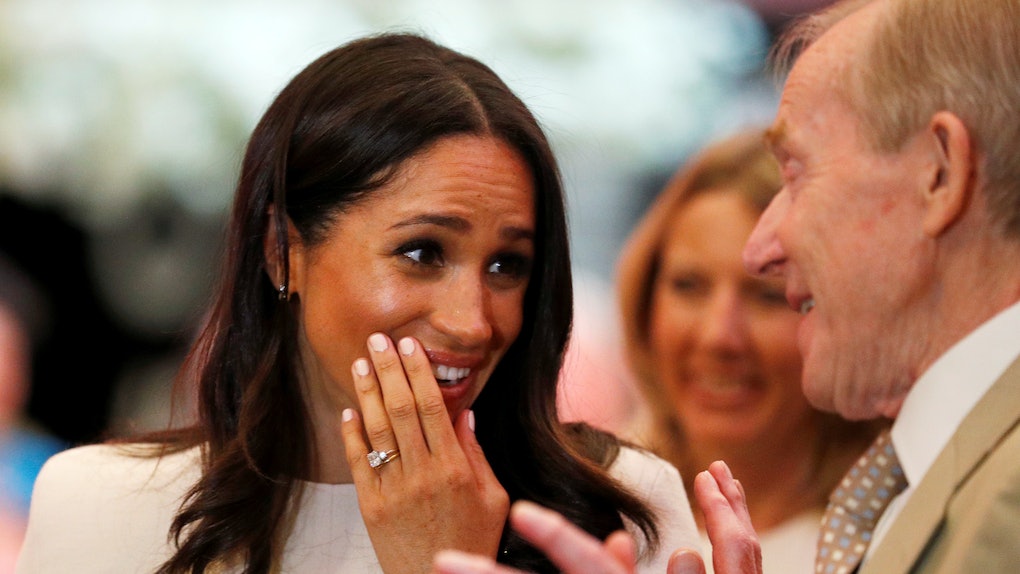 Move aside impastas, because the all-around-incredible Meghan Markle has a healthy pasta recipe to rule them all. There’s nothing like a comforting bowl of rich, creamy pasta to finish off the night — except, of course, an equally comforting bowl of cream-free, plant-based pasta approved by a royal. By making one simple swap, Meghan Markle's pasta recipe transforms a nutrient-rich vegetable into a smooth sauce. Her secret? The unexpected, but absolutely beautiful zucchini. According to Delish, in Markle's zucchini bolognese recipe, she slowly cooks the veggie for four hours, alongside some chopped-up onions, olive oil, and a bouillon cube.

See, patience really is a virtue when it comes to cooking pasta sauce, and that's especially the case in Markle's recipe, which calls for a four-hour cook time for the sauce alone. But aside from that one detail, the recipe is a piece of cake (or, a plate of pasta, I guess?): In a large pot, warm up some olive oil over medium heat, then add your chopped onion, and cook that for about five or so minutes. Next, add your zucchini, some water, and a bouillon cube, cook on low heat for four hours, and serve over pasta — that's it!

In case you're not familiar with bouillon cubes, they're basically just little cubes of concentrated broth, like the kind you'd find in soup. In Markle's pasta recipe, the tiny square adds a big punch to the gentler flavors provided by the other ingredients, without overshadowing the zucchini star. Letting all of the ingredients simmer for such a long time allows the flavors to deepen, and I'd imagine it creates the perfect, soft texture to coat your fresh pasta.

Once everything is combined into one smooth mixture (the recipe says the mushiness is a good thing!), it's all ready to incorporate into your cooked pasta. Look, I don't know about you, but I'm totally here for a pasta hack that's easy, delicious, and healthy.

Not only does Markle do her own stunning makeup and dress like an absolute style icon, but she's got you covered when it comes to taking care of your body, too.

According to LIVESTRONG, zucchini is a great source of both vitamin C and the essential mineral manganese. Both of these nutrients work to help support healthy bone development, so this creamy, dairy-free substitute is actually nourishing your bones, even though there’s no milk involved.

But wait, there's more good news — good-for-you news, to be exact. Per LIVESTRONG, the green veggie is also rich in potassium, and according to the American Heart Association, potassium can be beneficial for your heart health because it reduces the negative effects of sodium. This is great news for Markle in particular, who told Delish that French fries are high on her list of favorite foods (same, girl).

To me, that's what's so awesome about Meghan Markle: She always knows how to keep it real, even as a royal. Her zucchini pasta hack proves that with a little creative maneuvering, a healthy veggie can absolutely hit the spot and satisfy a mean craving. "The sauce gets so creamy, you'd swear there's tons of butter and oil in it, but it's just zucchini, water, and a little bouillon," Markle told Delish. And while her recipe suggests sprinkling some grated parmesan on the finished plate, if you really want to lean into the plant-centric style of this dish, you can substitute the cheese with something like nutritional yeast, which packs a cheese-like punch and a ton of energy-boosting vitamin B12.

Sadly, though, Markle is apparently missing out on one popular pasta sauce ingredient now that she's officially the Duchess of Sussex: garlic. Personally, it's almost second nature for me to throw some minced cloves into a DIY sauce, but according to Express, the Queen's preference against the resulting pungent smell has created a ban at the palace. Darren McGrady, the royal chef at Buckingham Palace, told the news outlet, "We can never serve anything with garlic or too much onions. The Queen would never have garlic on the menu."

Although she doesn't get to eat garlic while she's traveling on official royal business, Markle can still fill the garlic void in her soul with some tasty pasta. "When I'm traveling, I won't miss an opportunity to try great pasta," she told Delish. Sounds like a royal after my own heart.