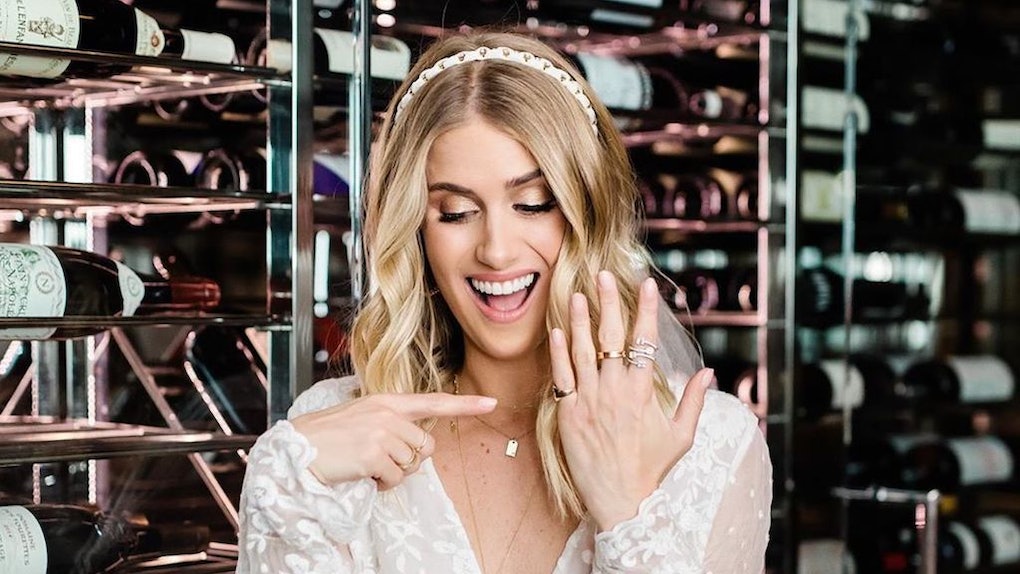 The life of your average Instagram influencer is already pretty wild (seriously, can I get paid for taking pretty pics in Paris?), but Marissa Fuchs has taken the gig to a whole new level. Instagram influencer and Director of Brand Partnerships at Goop Marissa Casey Fuchs, aka @FashionAmbitionist, has spent the past couple of days following the elaborate goose chase of a proposal set up by her boyfriend Gabriel Grossman, and lucky for us, she's taken her followers along for the ride. Now the influencer is officially married, and let me tell you, Marissa Fuchs' wedding dress is just as amazing as this whole journey has been.

Fuchs arrived in Paris with her new wedding dress and shoes in tow, and after a quick stop at her hotel, she made her way to her mystery destination to meet Grossman. There she changed into her gown and finally came face-to-face with her soon-to-be husband. "I know you love crop tops, so this was the best dress that I found," she told Grossman, stepping out onto the balcony where he waited with family and friends. "And it's a crop top." Yes, I can confirm that it was indeed a crop top, and that yes, it was absolutely fabulous.

Grossman gushed over the dress, which included a long-sleeved lace crop top with pearl buttons down the back and a full tulle skirt. "I love it," he said. Soon enough, the two stood before a rabbi and took their vows on the balcony while friends and family snapped photos. Then they shared a private moment alone, where they danced to Grant Gustin's "Running Home to You" for their first dance. On the way to the venue, Fuchs had listened to some of her and Grossman's favorite songs, and she'd noted that this was one of their favorites.

"We're married, guys," Fuchs said as Grossman stood beside her. Grinning, she held up her hand, showing off her grandmother's engagement ring, which was handed down to her to wear as her own engagement ring. In a message that followed, Fuchs explained, "Photographer real pictures and proposal video to come in the next few hours. Stay tuned. We are taking this time to be present and in the moment."

The Friday afternoon ceremony concluded the whirlwind adventure that took off on Tuesday morning, when Grossman first teased the beginning of a scavenger hunt to find the proposal. Fuchs was led from New York City, to the Hamptons, to Miami, and finally to Paris. As Grossman explained in his video, he and Fuchs aren't into traditional weddings, and he wanted to surprise her with something totally out of the ordinary. "What would Marissa want?" he pondered out loud on his Instagram story, which Fuchs reposted for her followers. "How could I marry her in a way that would incorporate everything that's important to her?"

Job well done, Grossman. Fuchs ended her adventure with some new duds, new jewelry, a ton of new Instagram followers, and a new husband, so I'd say the elaborate proposal-turning-wedding was a success. Honestly, I've had so much fun following this journey that I'm not quite ready for it to end, but I'm still happy that the couple's journey concluded so beautifully. Now excuse me while I go refresh Fuchs' Instagram page repeatedly, waiting for those official wedding pics and videos to drop.