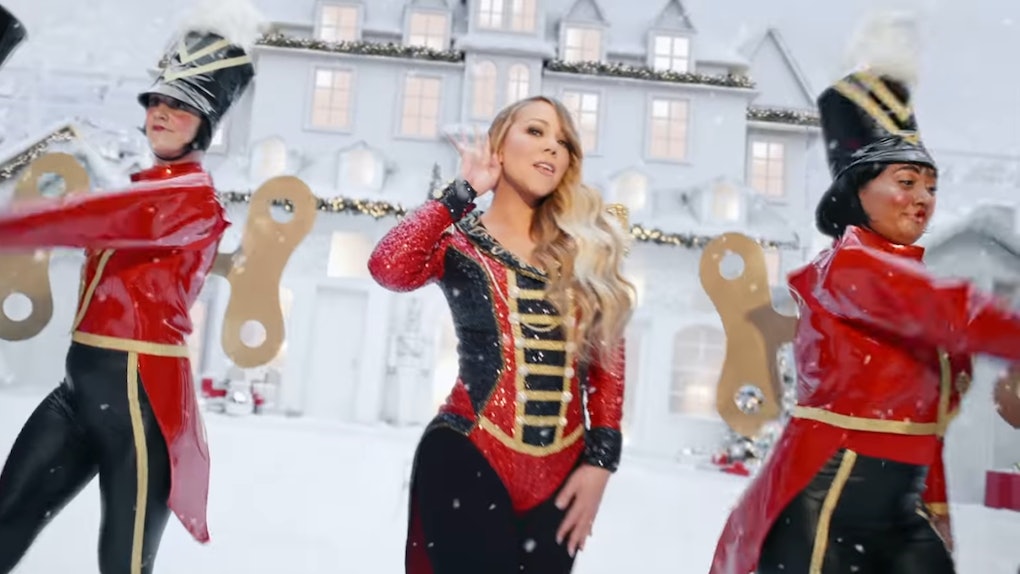 The new music video is titled, "All I Want for Christmas Is You (Make My Wish Come True Edition).” In the opening, we see a little girl gazing into a shop window from outside. Featured in the window shop scene in none other than Carey, dressed up in a Santa-inspired jumpsuit. Everything in the window springs to life as Carey is singing and then the girl enters a complete winter wonderland after she walks through the glass.

Basically, it's the embodiment of a holiday dream, with Santas on ice skates, dancers in cotton candy-inspired dresses, dancing plushie polar bears, and a huge white house decked with festive lighted garlands and the initials "M. C." above the door.

Eventually, Carey is dressed as a toy soldier, as well as an angel with white wings. The layering of the video is well done and the holiday imagery completely tops the OG music video. The original version also featured Carey in a Santa outfit, but had a more homey quality with Carey playing in the snow and enjoying some holiday time at home. While the original music video was more than festive, this new take has a glitzy, showy appeal that is dripping with glamour.

But the most fun occurs when Carey's kids show up. Moroccan Scott and Monroe — Carey's eight-year-old children with her ex Nick Cannon — first appear coming out of a jack-in-the-box. The two then meet up with the other children in the wonderland and having a dance session. At one point, viewers even get to catch her son Moroccan breakdance. Can it get any cuter? Probably not.

The holiday tune has been a seasonal hit ever since it was first released, but it only just took the number one spot on the Billboard Hot 100 chart for the first time this year. Carey celebrated the long-awaited win by taking to social media, saying "We did it," with a string of emojis.

She went on to tell People that the song's success was more of a "gradual thing," as it had always remained popular but gradually claimed to the top spot on the charts as the years went on. "That makes me feel really proud as someone that loves Christmas so much," she said.

TBH, it's clear that Carey is in love with Christmas, especially with the new music video adaptation of her song. You can bet Carey's holiday classic will be at the top of my playlist all December.

More like this
Is Saweetie's "See Saw" About Quavo? The Lyrics Are Brutal
By Corinne Sullivan
Rosé From BLACKPINK's "Gone" Music Video Is The Ultimate Sad-Girl Aesthetic
By Abby Monteil
These Tweets About BTS' 'Bang Bang Con 2021' Sum Up The Epic Performance
By Cianna Garrison
Stay up to date