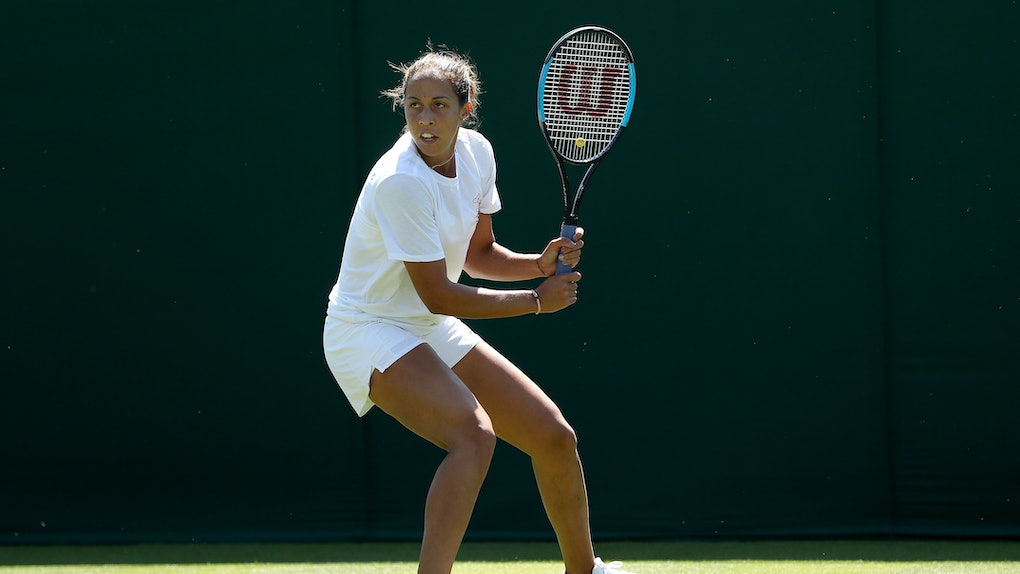 Madison Keys Hates Cardio Just As Much As You Do, So Here’s What She Does Instead — EXCLUSIVE

When you think of a professional athlete, you might picture someone who lives, breathes, and loves exercise in all its forms, who trains for hours every single day. So using tips from said athlete's workout routine might seem a bit unrealistic for you, a twenty-something who may or may not be able to make it up the steps of a fourth-floor walk-up without losing their breath, right? Well, in an exclusive interview with Elite Daily, 23-year-old American tennis star Madison Keys admitted she hates cardio just as much as the rest of us, and TBH, it's kind of a relief to hear. After all, if Keys, who ranks in the top 25 athletes in the Women's Tennis Association, has a rough time with the heart-pounding, sweat-inducing, fast pace of cardio, then there's probably some hope for the rest of us who loathe this type of exercise, too.

Now, it's true that Keys' daily schedule revolves more around exercise — and, more specifically, tennis — than most mere mortals' everyday routines. She tells Elite Daily, "A typical day of training for me is usually about three hours of tennis on-court and one and a half hours in the gym working on either lifting or cardio. That’s pretty much my schedule five days a week." Replace the word "training" with "eating," and then yeah, I can totally relate.

But seriously, despite her dedication, Keys says she doesn't exactly bolt out of bed, ready to tackle all the #fitnessgoals with a smile on her face every day.

"Personally, I hate cardio more than anything," the 23-year-old athlete tells Elite Daily. "I cannot get on a treadmill and run or anything like that, so I always try to find fun ways to make cardio more interesting to me."

Athlete or not, most of us can agree that "fun" isn't really the first word that comes to mind when you think about cardio. But Keys knows how to trick her mind and body into enjoying something she knows she doesn't actually like that much; it just takes a little bit of creativity on her part. "I like to create a circuit of four to five exercises and do them for 20 to 30 seconds, rest for 30 seconds, and then do the next one," she explains. "And then [I go] through that four times." If she feels like taking things to the next level, Keys adds, she'll sometimes use weights in her circuit workouts. Hey, it sounds more entertaining than staring daggers at the clock on the treadmill, right?

Keys, who recently competed at Wimbledon, adds that with her rather hectic schedule, it’s important for her workouts to be quick and efficient. "Really, it’s about keeping yourself going, even if you only have 15 minutes," she shares. "If [you're] working out at a high intensity, it can be just as effective as a much longer workout. Circuits are great, and I prefer them to running on the treadmill."

The 23-year-old tennis star keeps it real on just about everything in her wellness routine, admitting she's also "the queen of pressing snooze" on her alarm most mornings.

But even when it feels hard for her to get out of bed, Keys says shifting her perspective to the positives can be really helpful in motivating her mindset for the day ahead. "The thing that I always focus on during the days when I may not want to get out of bed for practice is remembering the moments where I’ve had big wins, or moments that made me feel incredible," she tells Elite Daily, "like winning the semifinals at the U.S. Open or even just making a semifinal at Roland Garros. Those are the moments that I try to remember, and I know that if I don't get out of bed and go to practice, and maybe do what I don’t want to do today, those days are not going to happen."

For Keys, helping others realize their own potential is just as important to her as finding that inspiration for herself each day. The tennis star recently partnered with ACUVUE and the brand's See It Through campaign, which is all about inspiring teens to set goals and work toward them in their everyday lives.

"It is something that is obviously really important to me because I’m constantly trying to set goals," Keys tells Elite Daily.

Keys shares that she's also involved with Fearlessly Girl, an internationally recognized organization dedicated to anti-bullying efforts in North America. While she says she mainly works with teenage girls at the organization, "I'm hoping to branch out into also including teenage boys in that conversation. Being able to combine setting goals and inspiring young people, it seems so natural to me. I do that in every aspect of my life," the athlete tells Elite Daily.

Again, Keys is a woman who knows how to keep it real on all fronts: the ups and downs of cardio workouts, the curse of the snooze button, and the importance of setting goals, not to mention inspiring others to do the same. Sure, your goals might look a little different from a 23-year-old tennis star's, but when all is said and done, she's navigating the same struggles that you are in this weird thing called life — and that's kind of comforting, right?