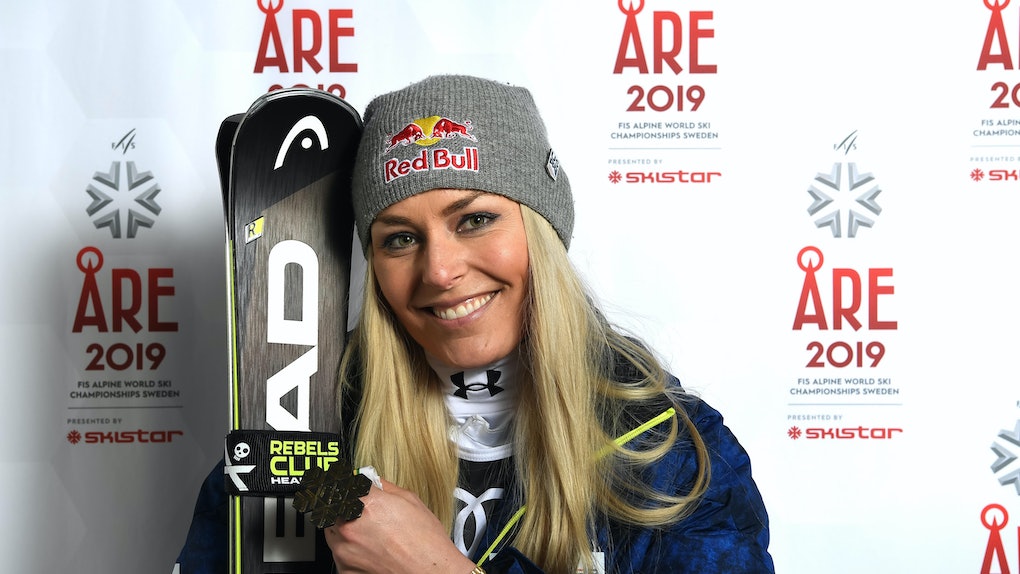 More times than I'd like to admit, I have to make a choice at the end of the day: start tackling the long list of chores I need to get done, or try to fit a workout in before I collapse into bed and fall asleep. More often than not, chores win out, because I've discovered that having a clean home makes a huge difference in my stress levels throughout the day. But what if you didn't have to choose between being productive and exercising? Get ready to get sh*t done, because Lindsey Vonn's home workout on Instagram is a hilarious example of how exercise (and yes, a little bit of multitasking) can bring joy to even the most mundane everyday activities.

In her Instagram video, Vonn can be seen getting into a plank position with her feet resting on two washcloths. She then uses her hands to walk herself through her home, dusting the floor with her feet as she goes along. "My sister says I’m a weirdo...I say I’m creative and cleaning at the same time 🤷🏼‍♀️ what do you think?" she wrote in the caption, along with the hashtags #homeworkout and #multitasking.

As funny an idea as this is, it's actually no surprise that the Olympic skier chose this half-plank/half-bear crawl workout to share with her followers, because she's said before that she's all about exercises that build muscle in her core and her legs. "Having a strong core and legs really makes me feel confident," Vonn told Women's Health in a January 2018 interview. "I like being able to squat heavy weight. And on my body, when I do leg workouts, I can see them getting bigger and stronger pretty quickly."

I, for one, can't watch this video without imagining how much this deceptively simple activity must make her abs burn.

But this isn't just about getting strong abs. Vonn is definitely a fan of combining fitness and fun. In an interview with Fitness Magazine, the Olympic athlete said that she loves playing Kinect, a dance game on the Xbox 360, when she's not training. "I dance around and have a great time, but I probably look like a dork," she told the outlet.

According to Lauren Lobert, DPT, OMPT, CSCS, owner of APEX Physical Therapy, Vonn is definitely onto something when it comes to using chore time as a chance to work in some exercise, too. Just do your best to make it a regular habit if you want to see yourself grow stronger, says Lobert. "Making a chore or activity schedule can ensure that you stay on track with regular 'exercise,'" she tells Elite Daily in an email. "This could mean vacuuming every other day, mopping the floors once per week, changing and washing the bed sheets weekly, etc."

As an added bonus, Lobert says you might even see some mental health benefits from combining chores and exercise, since you'll walk away not only having gotten your heart rate up, but you'll also have taken time to organize your space. "Since you are being more active around your home, you will likely have a cleaner and more organized environment which can make you feel more calm," she explains.

But if doing chores is literally the least fun thing you can imagine, you might want to try another approach, because finding exercises you actually enjoy is key to building fitness into your life in a sustainable way. "Staying 'active' does not mean logging an hour at the gym every day," says Tara Laferrara, a NASM-certified personal trainer and yoga teacher. "Your number one goal should be to find a few minutes each and every day to squeeze in some sort of movement."

Depending on what you love to do, this could mean chasing your dog around the apartment for a while, or even just having a solo dance party in the kitchen while you're waiting for the pasta to boil for dinner.

More like this
I Tried Singing While Running Like Miley Cyrus & OMG, My Lungs
By Rachel Varina
Away's Travel Accessories Collection Brings Comfort To You In Any Destination
By Marisa Casciano
5 Signs You're Burned Out From Dating & Could Use A Break
By Danielle Sinay
Stay up to date