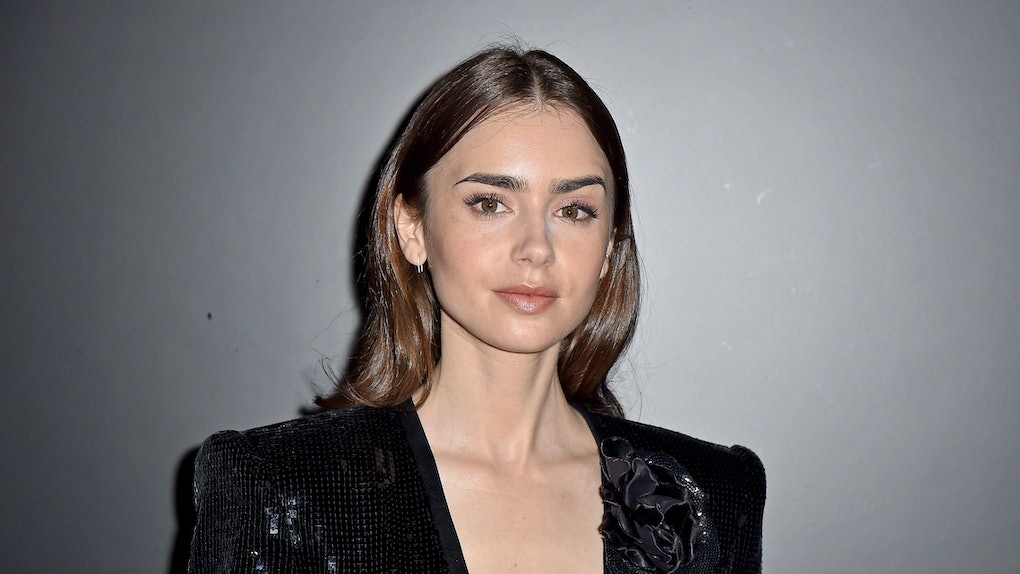 Emily in Paris actor Lily Collins announced her engagement to boyfriend Charlie McDowell in late September. The duo first became Instagram official back in August 2019, when the star posted an adorable couples' photo captioned "Always got your back..." And just like that, roughly one year later, it became clear that the pair were fully committed to each other and very excited to spend their lives together. If you've ever wondered what Lily Collins’ zodiac sign says about her as a partner, you're not alone. Although the Okja actor is very taken, the good news is that you can still dream. Born on Mar. 18, Collins is a whimsical Pisces who thrives in creative environments where her imagination can roam free. Here's what it's like to date a deep and emotive fish.

Pisces is a water sign that has many different sides to their personality. "[They] are well known for their adaptability, conforming their interests and intentions to the situation at hand," according to Astrology.com. This chameleon-like ability to reinvent themselves from moment to moment makes it easy for them to fit into almost any vibe. Whether they're chilling at a family BBQ or accompanying you to a work event, Pisces are impressive and charming conversationalist. However, constantly shape-shifting also comes with its challenges. "This can be dangerous for The Fish, as their sense of self may slide off into the background," read the site.

If you're someone who values true romance, then you need not look any further than a Pisces. These deeply emotional individuals rarely find themselves in wishy-washy relationships. If they're spending time with you, then chances are they've already jumped into the relationship head first. "Pisces ladies are the ultimate romantics of the zodiac, often losing themselves completely in the fantasy of love," explained Astrology.com "Boundaries are very permeable for Neptune-ruled Pisces, whose watery nature rushes in and subsumes her lovers, like a mermaid luring sailors away from shore with her siren song."

Although being with a partner who is completely dedicated to the relationship is a good thing, for fish, finding a balance between love and the other areas of their lives can be tough. "The astrological symbol of The Pair of Fishes represents Pisces’s dual nature, each swimming in a different direction simultaneously," reads the site. "Pisces must really focus and devote themselves to setting personal goals. Reciprocity is tricky for these giving, generous ladies who often must work on the art of receiving. This water sign is much more likely to pour out everything she has in her heart for someone else before taking much time or care for herself."

Ultimately, dating a Pisces is likely to be a magical experience full of meaningful moments and a profound sense of connectedness. However, for a relationship to go the distance, Pisces must find a partner who is willing to give as much to the relationship as they are.