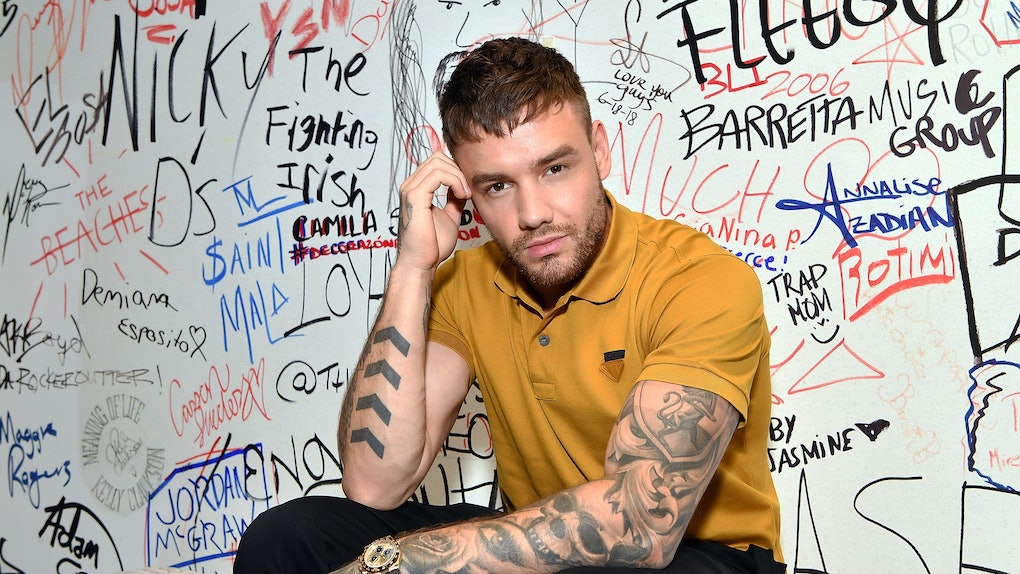 Liam Payne knows a thing or two about matters of the heart — and not just because he knows how to write a hit love song. He's also been in a handful of high-profile relationships, survived some serious heartbreak, and more recently, gotten engaged. Fortunately, he's shed some light on the romantic wisdom he's gathered on more than one occasion. Over the years, the 1D alum has given a number of candid interviews — and TBH, Liam Payne's quotes about dating and love are surprisingly relatable considering he's a celeb.

While Payne has been reportedly linked to such stars as Cheryl Tweedy (with whom he shares a son, Bear), Sophia Smith, Cairo Dwek, and Naomi Campbell (#neverforget), he finally seems to be settling down with his lady love of two years, Maya Henry. Their engagement was confirmed by multiple sources on Aug. 28, making Payne the first member of 1D to put a ring on it. Payne hasn't been shy about expressing his adoration for Henry, either, who he claims is "always keeping the biggest smile on his face through all the stress" and "making him realize how perfect his life is."

Having the whole world keeping tabs on your personal life certainly isn't easy, and Payne has had his fair share of bumps along the road to love. On the bright side, it seems like he's learned a lot along his journey — as is evident from these soul-baring comments about his search for The One. While you may not relate to the struggle of dating in the public eye, many of his quotes will surely make you feel oh so seen.

On Healing From Hurt

In an October 2019 MTV News interview, Payne shared how experiencing heartbreak helped him to get a deeper sense of what love truly means.

"Honestly with love, I think you don't really understand it until it gives you that sting," he told the news outlet. "It took a long time for me. Something really hurt me and it kind of made me appreciate love and people a lot more."

On Getting Turned Down

Believe it or not, Payne hasn't always had the best luck when it comes to love. He admitted to BBC Radio that he had quite a few romantic disappointments, particularly during his teen years.

"I once sang to a girl at the lockers," Payne explained in the interview. "I asked her out a record number of times, I asked her out loads and really fancied her. She dumped me. She went out with me because I sang to her and then dumped me the next day."

Apparently, that wasn't his first brush with rejection.

"The story of my bloody life if I'm honest, it happens to me loads," he added.

On Coping With Heartache Through Music

BTW, you're not the only one who has a go-to breakup playlist. Payne, too, often turns to music when he's dealing with heartache — and in his interview with MTV News, he revealed that he had Justin Timberlake's Justified and Usher's 8701 on repeat during those times in life.

"I definitely spent a lot of time crying to that 8701 album over many different girls who broke my heart," he added.

On Being In The Spotlight

Having paparazzi stalk you on date night and having your latest breakup splashed all over the headlines can't be easy. In an interview with MTV News ahead of the release of his solo album, Payne explained how fame has impacted his love life.

"For the longest time, living such an exposed life made dating really hard," he revealed.

On Being More Open

Even though dating as a celebrity might come with some risks, Payne admitted to MTV News that he's so over trying to conceal everything. With Henry, it seems he's finally learning to let go rather than living in fear.

"I'm kind of at the place in my life now where I just realize it's not worth sacrificing my happiness just because somebody might see something," he explained in the interview. "I don't have anything to hide."

On Making The Right Choices

Payne demonstrated immense maturity when he announced his split from Sophia Smith in late 2015 He told The Sun at the time that he was "devastated" about the breakup, and blamed it mainly on hectic schedules keeping them apart.

"In order to do right by somebody, sometimes it’s better not to do what your heart wants, but to do what’s better for them,” he added.

Wise words to live by.

On The Girl Who Keeps Him Grounded

Speaking of calmness, Payne revealed to MTV News that Henry is the one who helps him to keep his cool, no matter what chaos is happening in his life.

"A lot of things in my life have happened very quickly, and I’ve not had the sense of stability with somebody in the way that I have it with her," he explained. "Everything outside and around me is so high intensity right now. She brings the calm."

On Building A Happy, Healthy Bond

Some say communication or honesty is the hallmark of a rock solid relationship. According to Payne, the key to a successful relationship is "a level of calmness, more than anything."

"It’s about having someone you can hang with, where you’re never pressured to fill the silence," he told MTV News in 2019.

On Dating His BFF

Payne never seems to run out of sweet things to say about Henry — and in his 2019 interview with MTV News, he discussed how his relationship with her has been a game-changer.

"Now that I’ve found someone who’s genuinely my best friend as well as my partner, it’s massively changed things for me," he told the news outlet. "She’s just so relaxed about everything. Someone who’s completely got your back with everything is just the wildest thing. I don’t think I’ve really experienced that before in someone, so it’s quite a wonder to watch."