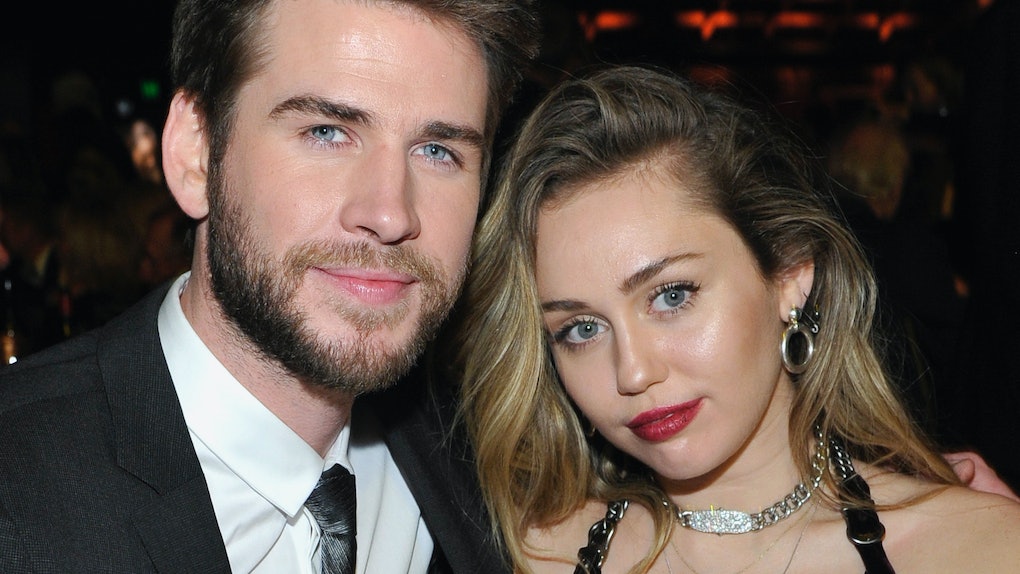 Miley Cyrus and Liam Hemsworth have only been married for a little over a month, but they're already loving the married life. Cyrus has been hella vocal in the last couple of months about how blissful she and Hemsworth are, but in a rare comment, Hemsworth actually talked about his relationship with the singer. And Liam Hemsworth's comments about married life with Miley Cyrus are the sweetest things you'll read on this Monday morning.

Hemsworth and Cyrus made an appearance at the 16th Annual G'Day USA Gala in Culver City, California, on Saturday, Jan. 26, where Hemsworth was awarded the excellence in film award. He spoke with Entertainment Tonight about his wife (eep!!), saying that, quite simply, he's loving every second.

"It's the best. It's the best," Hemsworth said. "I feel so lucky to be with someone like her. It's great. Very lucky."

Hemsworth's speech was a sweet and self-effacing one when he accepted the excellence in film award.

"I was just saying, I get embarrassed I get awards for acting because I already feel so privileged to do something that I love so much," he said. "It's such a great position to be in but I'm very thankful and grateful to receive this award. It's really cool." He also gave a shout out to Cyrus in the speech, and the crowd swooned.

“Thank you to my beautiful wife,” Hemsworth said, then the audience cheered. “You are a sweet, sweet angel. You’re great, you’re great." Cyrus apparently gestured for him to go on complimenting her, and he quipped back, "I'll tell you later." Ugh, these two. This marked their first official appearance as a married couple, by the way. Milestones!!

The Daily Mail reports that Hemsworth said at another point in the night that being married is "wonderful," although not much has changed, given the length of their relationship.

"It's wonderful," he said, "we've been together for the better part of 10 years so it doesn't feel like a lot's changed on one hand, but on the other hand it does...It's all great, I'm loving it!" We are too, Liam!!

Talking about his Dec. 23, 2018, wedding day with ET, Hemsworth said it was a small, simple affair.

"It was great, it was just a really nice, beautiful day with our immediate family and a couple of close friends," he said.

Hemsworth recently celebrated his 29th birthday on Jan. 13 and Cyrus posted a lengthy Instagram detailing how much she loves their life together in honor of it.

"L, HBD to my #1. When we met, you were 19, Today you are 29," she wrote. "I thought I could share some of my favorite things about my favorite dude in honor of this very special day."

Among a sh*t ton of swoon-worthy things Cyrus listed (is this the "7 Things" reboot we all deserve?!), Cyrus said,

I even love when you shrink my favorite t-shirt in the dryer — because having a boyfriend (oh em gee I almost forgot you’re my friggen husband now) that does laundry is pretty much the best thing ever. I love how you learn and grow. I love writing songs about you on the piano. I love how you let ME be ME.

Ugh, these freaking two. We stan Mr. and Mrs. Cyrus/Hemsworth.