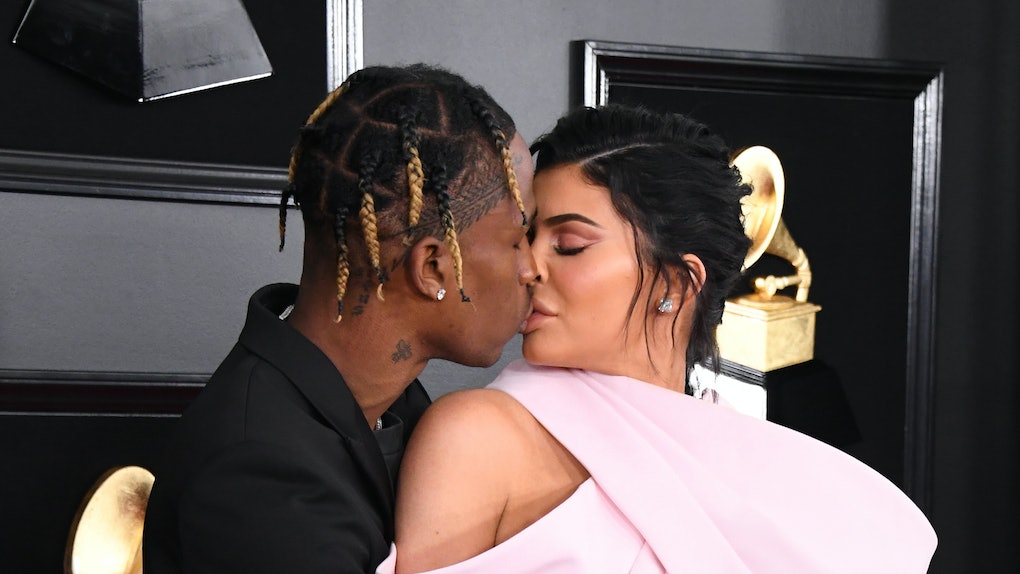 Despite the fact that Kylie Jenner loves to rock serious baubles on her fingers time-to-time, she and Travis Scott are not engaged... yet. Fans are waiting for the two to make it official and her affinity for glamorous stones plus their tendency to call each other "hubby" and "wife" have made it tricky for folks to keep up. Pair that with the fact that they kept their pregnancy with baby Stormi a total secret, and you have one major recipe for suspicion soup. However, Kylie Jenner's response to Travis Scott marriage rumors just put the speculation to rest.

Scott and Jenner's romance can be described as nothing short of a whirlwind. The two began dating mere weeks after she called things off with her previous longterm boyfriend, Tyga, in April 2017. Shortly after that, they were pregnant. Stormi arrived on Feb. 1, 2018, and the engagement rumors have been coming in hot and heavy ever since.

Recently, Jenner began rocking a GIANT emerald cut diamond on her engagement finger, starting on Super Bowl Sunday. Coincidentally, Scott performed at the Super Bowl halftime show, which would have made for a very special engagement day, had he chosen to pop the question. The ring also appeared in a Valentine's Day-themed photo on Jenner's Instagram, a.k.a. the most popular romance day of the year. You can forgive fans for assuming wedding bells are chiming in the distance.

Still, according to Jenner's recent interview with Paper magazine, she and Scott are not engaged. I repeat, they are not engaged. Jenner says she would never be able to hide that kind of news. (I beg to differ, considering she hid a whole pregnancy for nine months. But, whatever.) Jenner told Paper, "I'll let everybody know."

Sure. Right. And I'm Kris Jenner.

The feature suggested Jenner seems to think an engagement is coming soon, which is exciting. Reportedly, Jenner "gushed" about Scott calling him a great dad, "big kid," and a fantastic partner. Earlier in February, Jenner posted a picture of herself and Scott snuggling with the caption, "baby #2?"

Quit playing games with us, Kylie!

As much as critics might want to hate on this happy couple, you can't deny the fact that they genuinely seem to love each other. I admit I was confused in the beginning because it all seemed so intense and so new, but Scott and Jenner continue to prove they're in it for the long haul.

In December 2018, Scott went so far as telling Rolling Stone he and Jenner are going to get married soon. "I just gotta sturdy up — I gotta propose in a fire way," he said. Scott also talked about his relationship with Jenner and how he needs her to "operate." He explained,

[At first], we was just two kids, f*cking around. Maybe, like, the first week, you don’t know if it’s real or a fling. Then the second week you’re like, ‘Whoa, I’m still talking to her, she’s responding, I’m responding. We ain’t run out of a thing to say.’ And it got to a point where I was like, ‘I need her with me to operate. She’s that one.’

OK, OK, OK. So, Kylie. Please try to keep us updated. Hopefully, Scott sticks to his word, too, and proposes in a "fire" way that fans can't help but hear about.

This is exciting. I'm excited. I'm watching you, Jenner.