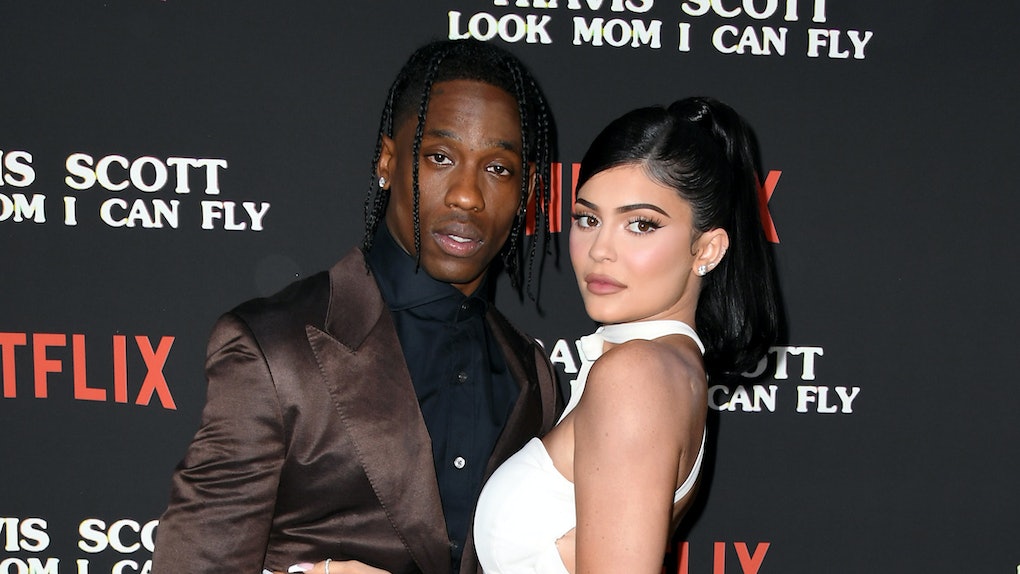 Things I'll never understand: football, 401(k) plans, and Kylie Jenner's romance with Travis Scott. Ever since they hit it off at Coachella in April 2017, the makeup mogul and the rapper have kept fans questioning their relationship status, and TBH, it's exhausting. However, while I don't know where these two currently stand, I do know Kylie Jenner and Travis Scott's matching butterfly tattoos have a pretty sweet meaning. In an Oct. 22 YouTube video, during which she rated her epic Halloween costumes over the years, Jenner finally explained why butterflies are an important motif in her relationship with Scott.

As you might recall, Jenner and her daughter, Stormi, dressed up as butterflies for Halloween 2018, which was over a year after Jenner and Scott debuted their matching butterfly tats on Snapchat. In May 2017, a month before getting their matching ink, Scott released a song called "Butterfly Effect." Fans suspect the concept of the butterfly effect — which questions whether the flap of a butterfly's wings can set off a tornado, or, in other words, something super small can have major effects — may have inspired Stormi's name. "When Travis and I first got together, we got matching little butterfly tattoos," Jenner said in the video. "Butterflies are just a symbol of our relationship and Stormi, and so it was special to do the butterfly costume."

Those aren't the only times butterflies have shown up in the couple's relationship. In August 2017, Scott gave Jenner a butterfly necklace as a gift for her 20th birthday. In February 2018, soon after Jenner revealed Stormi's birth, she gave fans a peek into her daughter's nursery on Snapchat, and the room was decorated with butterflies. Let's also not forget that music video Scott starred in alongside SZA in June 2017 for "Love Galore," which featured scenes of the two surrounded by butterflies while Scott sang about "plant[ing] that seed" and getting a woman pregnant. Just! Saying!

In the Oct. 22 YouTube video, Jenner also revealed her fave Halloween costume of all time: when she, Scott, and Stormi dressed up as superheroes in 2019, which was not long after Jenner confirmed her and Scott's split on Twitter. "I loved our superhero costumes that Trav, Stormi and I did," Jenner said. "We all picked our favorite colors, and we were superheroes because Trav always says we are a super family and Stormi is a super child. I threw this huge party for Stormi. It was super fun and a memory I'll cherish forever."

Whether these two reconcile or not, I'm just glad they always put their baby butterfly first.