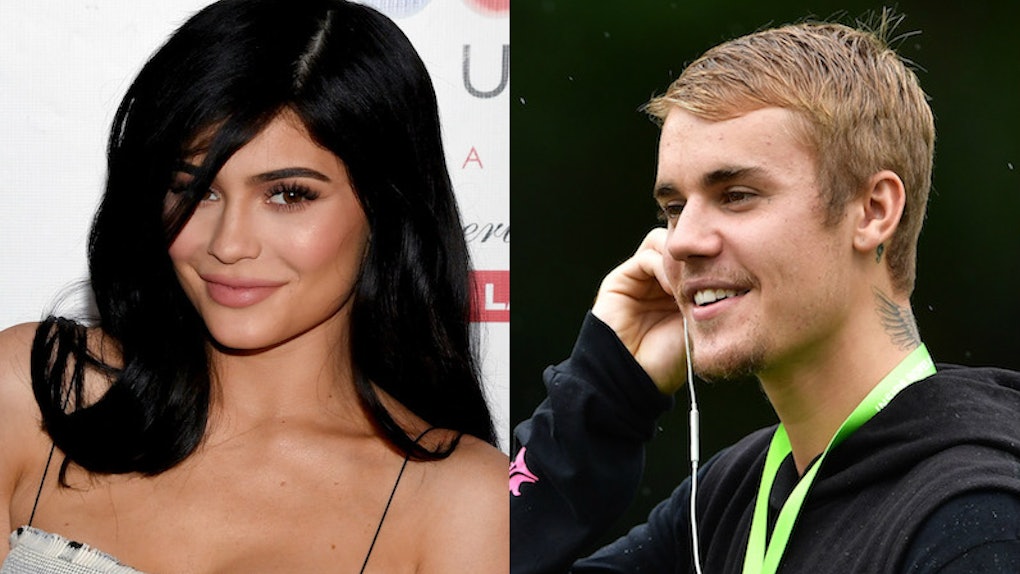 We’ve all been there: You’re casually scrolling through your Instagram feed when suddenly, someone’s lavish vacation pics (#nofilterneeded) instantly catch your eye and trigger an intense wave of pure envy. Well, rest assured that it happens to celebs, too — and Kylie Jenner & Justin Bieber's Instagram interaction on Jan. 20 serves as proof. When Bieber spotted one of Kylie Jenner’s posts from her tropical vacay with BFF Jordan Woods, boyfriend Travis Scott, and daughter Stormi Webster, he was definitely feeling the FOMO, and he let it be known in a hilarious comment on her IG.

And who can blame the Biebs? Between matching swimsuits and luxurious sun-soaked boat cruises, it appears as if Jenner, Woods, and little Stormi are straight up living. So, when the star posted a pic of total paradise, she captioned it, “[D]on’t ever wanna leave,” and it makes sense, because the photo shows a stunning infinity pool surrounded by palm trees and leading out to sparkling ocean. Apparently, Bieber was definitely feeling jealous of the spectacular view, since he commented, “Wow lucky where’s the invite to hails and i” (referring to wife Hailey Baldwin). Jenner obviously got a good laugh out of this comment, because she quickly replied to Bieber, “lolll you love birds can come next time.” Thankfully, the whole hilarious exchange was captured by the Instagram account Comments by Celebs.

Let’s be clear, though — that’s not the only envy-inducing pic Jenner posted on her trip. She also shared a photo of Stormi in a charming outdoor shower, captioning it, “[S]he’s in heaven here.” In another post, she gazes off into the distance on what appears to be a romantic oceanside dinner with a sunset in the background. The caption reads, “[C]ouldn’t have started the year off more perfect than this.” And let’s not forget about the adorable shot of Jenner, Woods, and Stormi in their coordinated neon green bathing suits.

Jenner has been posting quite a few photos and Stories to Instagram on this trip, but it all started with one pic of little Stormi leaving footprints in the sand on the beach, and Jenner simply captioned it, “Let the birthday adventures begin.” Indeed, this trip was planned to celebrate Stormi’s first birthday on Feb. 1, which her parents have been thoughtfully plotting since June. At the time, Jenner revealed to fans via Snapchat that Stormi’s first birthday was going to be “epic,” according to People, and boy, did she deliver. She also told fans that she had originally been planning to do a magical unicorn theme, but North and Penelope already beat her to it for their joint bday bash.

Obviously, her backup plan did not disappoint. Well — except for the Biebs, who was clearly bummed he didn’t get an invite. After all, he’s been a longtime friend of the Kardashian-Jenner clan, given that Baldwin has frequently modeled alongside Kendall Jenner. Not to mention, Kylie Jenner and Travis Scott are reportedly on the guest list for Bieber and Baldwin’s upcoming wedding. Oh, and fun fact: Back in 2013, Kylie dated rapper Lil Twist, who is a mutual friend of Bieber’s, so they apparently hung out quite a bit.

So given their history and friendship, it’s no surprise why Bieber made some remarks about being jokingly offended that he wasn’t included. Still, the point is, Jenner’s response made a reassuring promise, “[Y]ou love birds can come next time.” Take a sec to let that sink in: Kylie and Travis might very well take a couples’ vacation with Justin and Hailey. If that’s not #squadgoals for a luxury getaway, I don’t know what is.