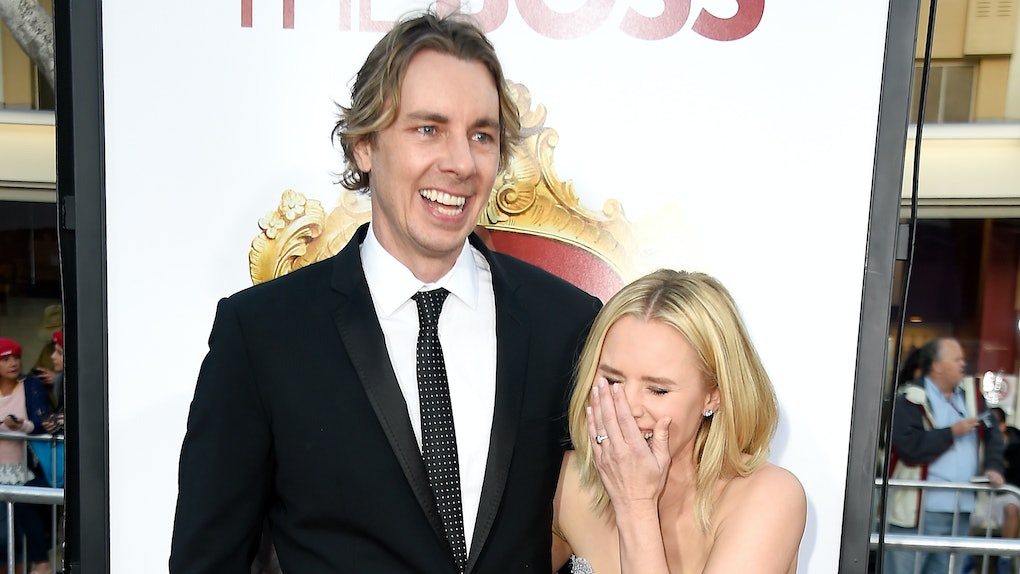 There's no doubt that the "birds and the bees" conversation can be awkward and uncomfortable, but part of me has to think that if it's being given by Kristen Bell and Dax Shepard, it's probably nothing short of priceless, hilarious perfection. At least, I like to think that's what it was like when Kristen Bell and Dax Shepard explained sex to their daughter, Lincoln. Bell and Shepard are pretty much goals in every other area of family and relationships, so having The Talk has to be no exception, right? Right?!

Turns out, the parents are just trying to figure it out, kind of like everyone else is. Bell and Shepard recently appeared on Ellen to promote their new baby line, Hello Bello, when Ellen asked the couple about "the talk" they had with their 5-year-old. It came about when Lincoln asked them where babies come from, as five-year-olds are wont to do. On Ellen, Bell and Shepard clarified that it wasn't exactly their choice to talk to her about sex. "Well she asked!" said Bell. "We didn't like, [say] 'Oh crap, we got to get around to that talk!'" said Shepard. "Yeah, she said, 'Well where do babies come from?' And we were both like, 'OK, real talk, sit down. Uhhh...'" said Bell.

"We went through the anatomy: penis, vagina, ovum, sperm," Shepard started. "We're laying it all out. We get right to the action." "Right to the good part," Bell continued. "And she's like, 'OK, I got to go outside,' and just left!" "Yeah, she bailed," said Shepard. "She knows all the organs, but when it got to the actual... the nuts and bolts of the operation..." "We bored her to death," Bell continued. It seems like Lincoln lost interest mid-way through the conversation, and bolted right before her parents got to the nitty gritty. So much for the birds and the bees!

Lincoln has a 4-year-old sister, Delta, who may soon be asking her own slightly awkward questions. But in the time being, Bell and Shepard are doing life as parents, which they admitted on TODAY isn't always easy. When asked how their kids were doing, Bell immediately started by saying "so annoying" and continued with, "they've become impossible to parent in a great way." "In a rewarding way," Shepard added. "Because they've figured out how to defend each other," Bell said.

"A couple days ago, I watched the older one square clock the little one in the face," Bell said. "I said if you hit her again I was taking away something special for a day. I'm gonna get Kitty from her bedroom, I took it away, and all of a sudden I start to feel this [hitting] on my legs." "From the victim!" Dax chimed in. "From the little one! And she says, 'Don't you take that kitty away from my sister, you mean mom, give it back!'" she continued. "And I was like, 'I was protecting you!' They won't let us punish the other one," which is "the best" Bell said, but makes parenting harder. "I think they call it Stockholm Syndrome, the 4-year-old is definitely under Stockholm Syndrome," Shepard said.

While Bell and Shepard may not have been able to give Lincoln the full-on Sex Talk this time, big ups to them for their effort. When the question comes up again (because it probably will, let's be honest), here's hoping she won't run away! Although honestly, don't we all wish we could've run away when our parents sat us down for The Talk? Lincoln is the hero we deserve.