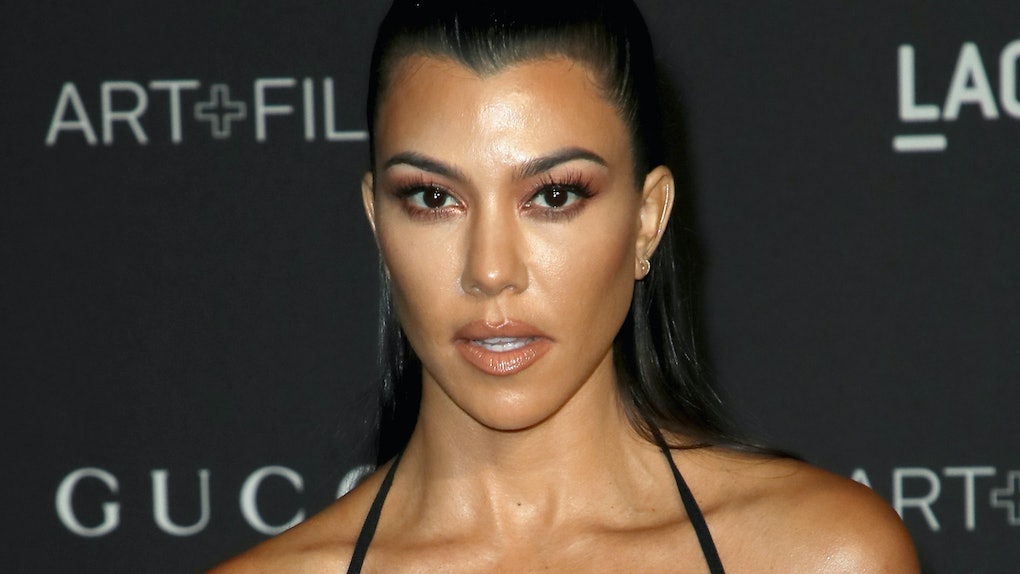 Has it finally happened? Is Kourtney Kardashian's patinum blonde hair real? Unfortunately, the answer is most likely a No, but until it's confirmed, at least let me indulge in this platinum fantasy! Methinks a wig is at work, but a damn good one at that, and Kourt is slaying all over Instagram, so I approve regardless!

While the Kardashians first rose to fame with their matching dark, thick, Armenian locks, they've all changed up their looks since, be it via wigs, dramatic haircuts, or dye jobs — that is, except for eldest sister Kourtey. While her siblings have been everything from brunette to blonde to pink-haired princesses, Kourt has almost never strayed from her dark strands, and they always look incredible, so like, why bother? Don't fix it if it ain't broken, and her hair is looking healthy AF, no breakage in sight. That's why fans were shook to their ever-loving cores when she took to Instagram flaunting some long blonde tresses. Would Kardashian really bleach her hair from root to tip? Such a dramatic, potentially damaging change! However, further inspection reveals the look is *most likely* a wig, which isn't to say it doesn't look real, and really cute.

I totally thought it was real at first. Can you blame me?

The first dead giveaway, though, was the length — Kardashian is a mother of three, and while her sisters all love a good set of extentions for some added length, she tends to keep her hair a little shorter and more functional for everyday life. Totally get that.

More often than not, Kourtney's hair is the shortest of the bunch, typically kept at a medium length hitting just below her shoulders:

The other dead giveaway? The tone. Yes, her strands are blonde, but uh, they look a teensy bit yellow? And we all know the Kardashians love an ashy, almost-white platinum. If Kourt was going to the trouble of bleaching, I have a feeling she'd at least ensure her strands were toned to perfection.

Khloé Kardashian goes blonder and brighter nearly every other week, so I'm sure she would've taken Kourtney with her to the salon for a proper toning sesh if this were the real deal:

Between the length and the shade — And the fact that, um, Kourtney would never — it's safe to say this new blonde 'do is most likely a wig. That is, unless we see a "How I Went Blonde" post hit Poosh, Kardashian's lifestyle website, sometime in the next 24 hours. Only thern will I believe it!

Upon even further investigation, it appears the wig belongs to the one, the only, Ms. Kylie Jenner:

Are you shocked? I'm admittedly not that shocked. Jenner loves a good wig, and a good blonde flex on the 'Gram even more! Kardashian captioned her photo "Her name is Daisy," to which Jenner replied in the comments, "Hi daisy." Kourt responded with a coy, "you know her well," and seeing as the mirror selfie was snapped in Kylie's glam room, it's safe to say Daisy is Kylie's blonde wig. Case closed!

What have we learned here today? Let's review. Kourtney looks fab as a blonde, she's wearing a wig and is in fact still a brunette, and Kylie Jenner not only lends her wigs out to friends, she also names them. And with that, I bid you good day.