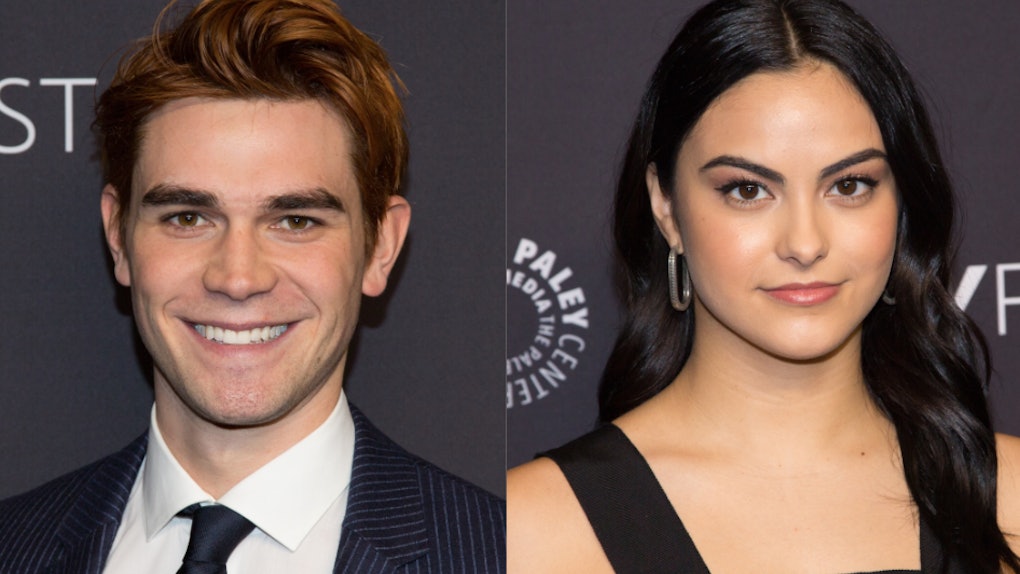 KJ Apa's 'Riverdale' Sex Scenes With Camila Mendes Are "Easier" Than Other Sex Scenes, He Says

I can't speak from experience on this matter but I have to admit that filming a sex scene just seems like it would be 5,908,098,983 different kinds of awkward. I mean, the way I see it, regular off-camera real sex with someone new can be awkward. But swap that for fake sex that you're trying to make look real?! AH. That being said, actors have to do this all the time and, as an avid TV and movie watcher, I'd say they generally do a pretty good job of it. For example, KJ Apa's Riverdale sex scenes with Camila Mendes are not only believable for the viewers but they're also apparently not even that awkward for them to shoot, according to a recent interview he had with Cosmopolitan.

In the interview, Apa got real about the ins and outs of shooting a sex scene. “It’s weird with someone you don’t know that well," he explained to the magazine. "On a movie set, you have time to get to know the person and rehearse before shooting. Camila [Mendes, who plays Veronica] and I just had to dive into it. Now that we’re friends, it’s easier.”

So, basically, what he's saying is that shooting sex scenes is just as awk as I imagined they'd be unless you're shooting them with someone you're familiar with. I don't know about you, but sounds a lot like real sex to me.

Sex scenes weren't the only topic Apa covered during his interview. He also spoke candidly about the difference between dudes in America and his homeland, New Zealand. “Guys in the States are a lot more confident than guys in New Zealand," he explained to Cosmopolitan. "There, if you go out with your mates, you all hang with one another because you’re too scared to talk to the girls. Being in the U.S. has made me way more confident. Also, having a New Zealand accent increases your chances by like 50 percent." Yeah, as a straight female citizen of the United States of America, I have to confirm his estimation about his accent increasing his odds with the ladies.

But I do wonder whether the confidence boost comes from being in America or from being a celebrity on a hit TV show... Like, listen, KJ, I'm not sure that every American dude is as naturally confident as the ones in the celeb circles you're running in.

Whatever the reason behind it, I'm just glad he's gained some confidence with the ladies and that he was willing to talk about it so openly with Cosmopolitan.

Apa isn't the first Riverdale cast member to speak so openly about love and sex to Cosmopolitan. In fact, a few months ago, his co-star and friend Camila Mendes got real about the misconceptions around sex that she's totally over.

“I’ve never liked this idea of 'don’t give him everything,' Like you’ve given someone all of yourself by having sex with them," Mendes told Cosmopolitan. "What’s valuable to me is giving you my love and my intimacy.”

In the same issue, their co-star (and Cole Sprouse's rumored girlfriend) Lilli Reinhart put to rest “the idea that sex is going to be the same with everyone." She elaborated:

That’s how I felt when I lost my virginity — I was like, 'So this is sex!' And then you have sex with someone else, and you’re like, 'Holy sh*t — this is so different.' What you want, what feels good to you — it’s all going to change with every partner you have.

Here's to the Riverdale cast continuing to provide us with real talk when it comes to sex and relationships both on and off the screen!