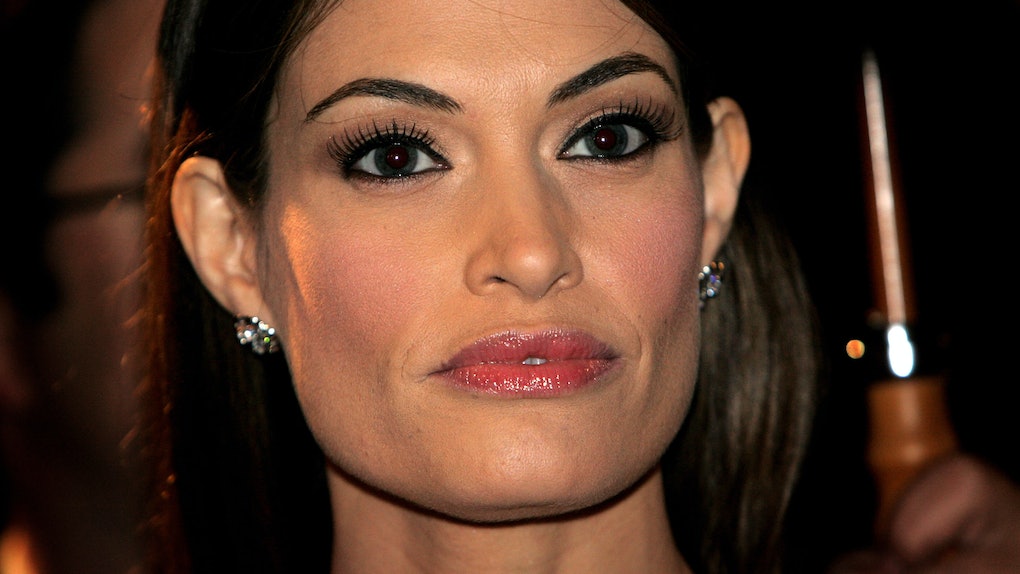 Congratulations are in order for Kimberly Guilfoyle, who apparently has a sweet new gig. In what may or may not be surprising news, Kimberly Guilfoyle has joined the 2020 Trump campaign as a senior adviser. This makes her the latest de facto Trump family member to be hired on by the president, and comes about a year after she started dating Donald Trump Jr. — y'know, in case you've been keeping track.

The former Fox News host, who had been working with the pro-Trump super PAC America First Action, reflected on her new position in an Instagram post shared on Monday, April 29. She posted a photo of herself locking arms with her beau and the president alongside a caption saying she is "THRILLED" to be taking on the role. The caption read:

America's continued success depends on @realDonaldTrump getting re-elected and continuing his #MAGA policies[.] That's why I am absolutely THRILLED to announce that I'll be joining the Trump campaign as a Senior Advisor! It's time to get to work and WIN for America in 2020!

In a statement shared with The Hill the same day, the Trump campaign added that the hiring of Guilfoyle helps in the goal of "assembling a world class team of talented individuals to help re-elect Trump."

"President Trump has a clear record of accomplishments and promises kept as he continues to Make America Great Again," Brad Parscale, Trump's 2020 campaign manager, said. "These exceptional additions to the re-election effort will help us take our case to the voters and ensure victory."

It's quite a switch for the former news host, but one she's seemingly been preparing for for some time now.

The longtime Fox News host left her position in July 2018 to campaign in the 2018 midterms with Trump Jr., whom she started dating earlier that year following his split from ex-wife, Vanessa Trump. Per The Associated Press, she went on to serve as the vice chairwoman of the pro-Trump PAC America First Action, which called Guilfoyle's departure a "loss" in a statement to The Washington Examiner, but added that it is a "gain" for the campaign. "Ms. Guilfoyle has been a tireless advocate for the president, an unflinching champion for his policies, and an impassioned spokeswoman for the cause," the statement continued.

She'll now be joining a series of other Trump family members who work for the president. As you probably know, Ivanka Trump and hubby Jared Kushner are White House advisers. Eric Trump's wife Lara works as a senior adviser for the reelection campaign, per ABC News. And Trump Jr., who has taken over at the family's Trump Organization, often hits the campaign trail on behalf of his father.

Some Twitter users were quick to point out how President Donald Trump appears to be keeping it in the family, saying he's "running out of family members," because at this point, the only Trump children who don't work for the president are his second-oldest daughter, Tiffany, who is away at law school, and his teenage son, Barron (who, at age 13, is limited in what he can do anyway).

It should be interesting, for sure. Best of luck to Guilfoyle on her new endeavor.