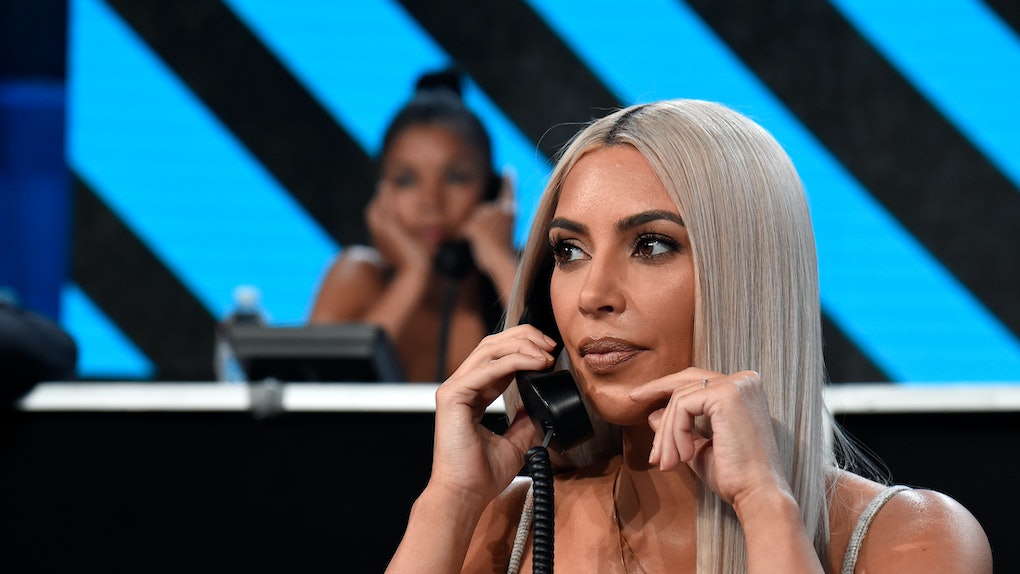 It took me some time to get to this place, but I can now say it with confidence: World, I am a Kim Kardashian fan. If you think you or your opinion is going to ruffle Kim's feathers, I hate to break it you, but you're wrong. Kim Kardashian's quotes about her haters are so chill, you can't help but be impressed. TBH, I think she's badass as hell. Her ability to evolve is unmatched, and for someone who famously has been told she "has no talent," she sure has captured the public's attention.

Just 12 days after the birth of her third child, Chicago West, Kardashian sat down with Elle Magazine for an in-depth interview about her life, fame, and career. The article is a super fun peek into her day-to-day life, revealing details like the fact that nothing in her home has a label on it (for KUWTK filming purposes) and that her staff wears all black everything (just Kim's preference). I've read a couple of interviews with Kardashian like this, and one thing almost all journalists note is how tiny and "delicate" she really is in real life. Writer Molly Young describes her as "softer" and "daintier" IRL than what we see on social media.

And boy, do we see a lot. If there is one thing Kardashian is enthusiastic about, it's selfies, portraits, glam photo shoots, and anything that shows off her famous features. It's part of her whole "thing." Recently, Kardashian has been posting pictures wearing her husband Kanye West's fashion line, Yeezy, exclusively. Every so often, though, a smoldering image pops up of Kardashian pushing the envelope in small lingerie, or sometimes, nothing at all.

More than anything, Kardashian says she simply has what it takes to be this famous and have this much exposure.

When it comes to criticism and backlash, she takes it all in stride. In fact, she considers herself a businesswoman first and a celebrity second. Kardashian said,

I was never one of those people who were handed everything from their parents. Even when I worked in my dad’s office, I was doing side eBay jobs on my lunch break. I lived a really great life growing up, but we were taught that if we wanted to keep that up, we had to work. At the end of the day, if someone offered me business or fame, I’d take the business side.

The fact is, she was born for this and she doesn't care what you think. She explained,

At the beginning, I looked at people’s opinions. Now I’m content in my life, and I don’t care. The things that make me happy now are different. But I swear, you have to be born for this. It’s not for everyone. I know I can handle it.

For example, Kardashian recently shared a controversial photo series of herself wearing a white thong and Fulani braids. Commenters accused her of culturally appropriating the traditionally African American cornrow hairstyle, though Kardashian claims the look was in homage to caucasian model, Bo Derek. (Derek once famously sauntered out of the ocean in an orange bikini and Fulani braids which had white beads hanging on the ends, just like Kim's hair in her photos.)

Kardashian even posted a picture in the cornrows talking on the phone with the caption, "Hi, can I get zero f*cks please, thanks." In response to the backlash, Kardashian told Elle,

I’m not worried, because I love Bo Derek. It’s a reference. If you genuinely love something, then it’s what you should do. It’s appreciation.

It’s one thing when people mock something and are negative. I’m clearly not being negative. Images mean a lot to me. I spend a lot of time on them.

So far, there is nothing to suggest Kim will begin censoring herself for anyone or any reason soon. And rest assured, whatever you see Kim share on social media is definitely on purpose, yo.