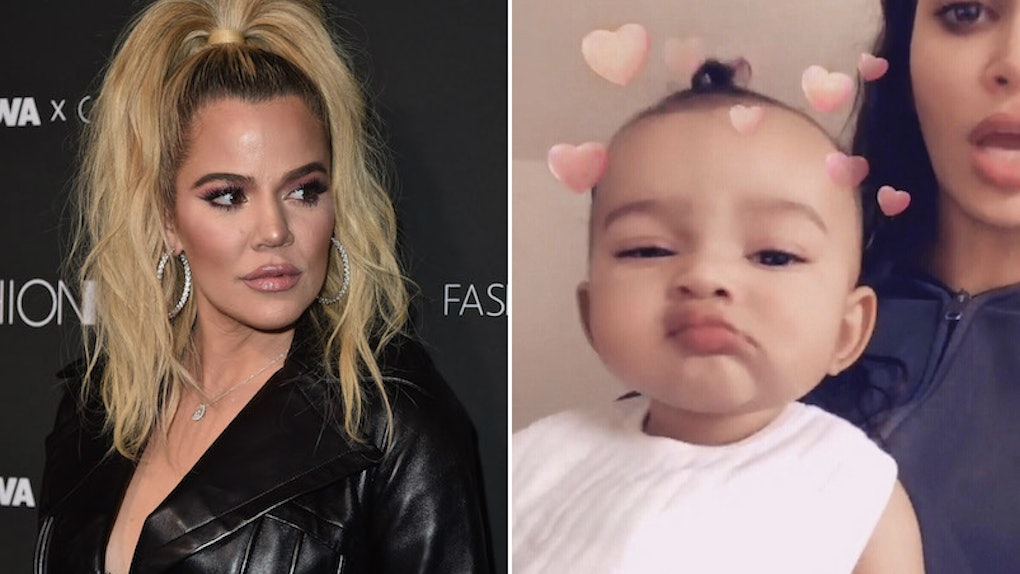 I never understand people who come for the Kardashians. First of all, haters, you're way outnumbered. Every year the Kardashian/Jenner clan grows exponentially, which means their power only strengthens. Second of all, you better believe they have their act together when it comes to standing up for their family members. Such is the case right now with Khloé Kardashian looking out for her sister Kim and her baby girl, Chicago. Khloé Kardashian's Instagram comment about Chicago to a troll is not only a great clapback, but also educational for anyone who is confused or has questions about Kim and Kanye's surrogacy process.

Kim recently shared a throwback photo of herself as a young girl with the caption "Baby K," and right away fans noticed similarities between baby Kim and her own children. Kim's youngest sister Kylie Jenner commented, "Omg Chicago," noticing how similar the photo looked to her new niece, Chi. Keeping Up With The Kardashian fans will remember Kim and Kanye West used a gestational carrier to have Chicago, meaning their own biological embryo was implanted in a surrogate who could carry the baby to term. The bottom line: Chicago is Kim and Kanye's biological child.

However, one fan who was not up to speed on the details chose to speak on Kylie's comment, suggesting it was impossible for Chicago to look like Kim as they incorrectly believed Chi's biological mother was actually the surrogate.

The commenter wrote Chicago "would either look MORE like Kanye or the surrogate mother," and Khloé was like, "Actually, no." KoKo jumped on Instagram to set the record straight by responding,

If you don't really know about someone's situation then maybe you shouldn't comment. Try informing yourself first before you make such silly statements doll. Your passive wanna be petty comment is simply uneducated. Chicago is completely Kimberly's biological child. Praise the lord she was able to have a surrogate and that we are blessed with sweet gorgeous Chi Chi.

The commenter (still not getting the message) replied, "I never said the baby wasn't beautiful, SHE DEFINITELY IS, but she did have a surrogate so the baby would either look MORE like Kanye or the surrogate mother. That's all love."

I am not saying you said that love. I am saying you must be more informed before speaking on something that you don't know anything about apparently. Chicago is Kimberly's DNA. Her and her husband made embryos and then they were blessed enough to have a surrogate carry their child for them since Kimberly is unable to. God bless modern medicine.

I guess my question is, how is it possible to be called out by Khloé literal Kardashian on something as important as this and still not do your research before responding? One quick Google search would have saved this person a second clapback and what I can only assume is at least some embarrassment.

I also want to ask this person, like, where were you when all of this was going down, anyway?

Whatever. At the end of the day, all families are beautiful. Hopefully, Khloé helped other fans who might have been confused about the surrogate process, too.