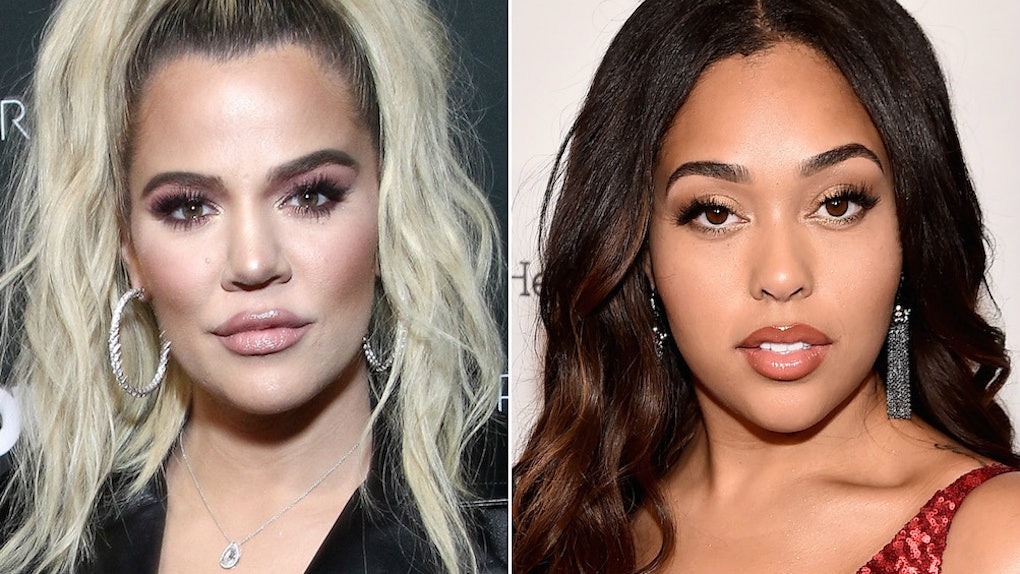 Where do we even begin with this Tristan Thompson and Jordyn Woods drama? On Feb. 19, TMZ reported that Khloé Kardashian and Tristan Thompson had broken up for good, and all reportedly because when Thompson was in Los Angeles to visit Kardashian and True Thompson for Valentine's Day, he reportedly cheated on Kardashian with Jordyn Woods. Woods has been Kylie Jenner's best friend for years and has been close with the entire Kardashian empire as a result. They were all seemingly on great terms up until the day Kardashian learned of Thompson's reported infidelity, as proven by Khloé Kardashian's comment on Jordyn Woods' Instagram just one day before this awful news broke. Elite Daily previously reached out to Kardashian, Thompson, and Woods' teams for comment on the breakup and cheating rumors, but did not hear back by the time of publication.

Kardashian and the rest of her family reportedly learned of all of this on Monday, Feb. 18. Keep this date in mind. E! News reports that Kardashian had it on good authority from multiple people that the rumors were true, and she reportedly broke up with him after he reportedly tried to deny them. Woods has not yet commented on any of the reports, nor has Kylie Jenner (although, sources have told both TMZ and E! News that Jenner is reportedly torn about how to handle this bombshell).

I'm just sitting here wondering if there were any signs of a rift between Woods and the Kardashian family before any of this news came out. But there were absolutely zero signs of trouble in paradise on social media.

Case in point: The same day that the Kardashians reportedly heard what went down at Thompson's house (Feb. 18), Kardashian was commenting on Woods' Instagram with kind words. The. Same. Damn. Day.

Woods posted two selfies to her Instagram on Monday, Feb. 18, with the caption, "all face."

Look through the comments section of Woods' post and you'll find Khloé Kardashian.

Kardashian commented, "Baby girl," which was, like, really sweet — and makes this whole situation even more heartbreaking.

The video shows Jenner using the puppy face emoji and turning the camera toward Woods, who is also in the room.

How many hours later did the sh*t hit the fan?! This whole thing is literally mind-blowing, people.

When the news of Thompson and Woods' reported tryst first broke on Feb. 19, Jason Lee, CEO of Hollywood Unlocked, posted a video to the Hollywood Unlocked Instagram account detailing all of the reports surrounding Kardashian, Thompson, and Woods.

A subsequent post included screenshots of comments Malika Haqq, Larsa Pippen, and Khloé Kardashian herself made in the video's comment section, seemingly signaling they believe the rumors are true.

Haqq (Kardashian's best friend) commented in all caps, "STRONG FACTS." Pippen (who is close with Khloé, Kim, and Kourtney Kardashian) commented, "Amen!!!" And Khloé Kardashian herself commented with a slew of shouting emojis. Elite Daily reached out to Kardashian's team for clarification about her comment on the video, but did not hear back by the time of publication. But y'all, it really looks like that was Kardashian confirming she believes all of this to be true.

Let's hear it for Tristan Thompson, who really knows how to time his bad behavior. Nothing like reportedly cheating on your girlfriend days before she gives birth to your daughter, and then reportedly cheating again when you're visiting her for Valentine's Day! If all this turns out to be true, this man is so canceled.

More like this
Travis Barker's Birthday Instagram For Kourtney Kardashian Was So Extra
By Lydia Wang
Khloé Kardashian's Twitter Likes Before Her Unretouched Photo Leaked Reveal A Lot
By Sydney N. Sweeney
Scott Disick's Quote About Seeing Kourtney Kardashian Date Is Heartbreaking
By Candice Jalili
Stay up to date