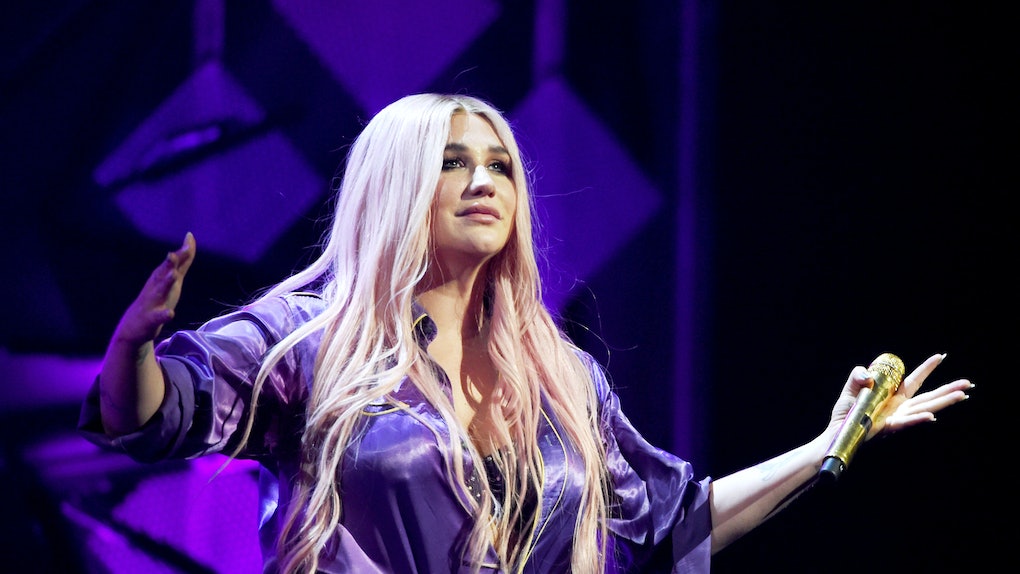 Kesha Wasn't Included In 'TIME's Person Of The Year & People Are So, So Furious

TIME announced its Person of the Year, and this year, it's a group of people the magazine is calling "The Silence Breakers." The group consists of women and men who have boldly and loudly spoken out against sexual harassment and assault in their various industries. The creator of the #MeToo campaign, Tarana Burke, is one of the women featured, as well as other women who made waves with their #MeToo stories in the aftermath of the Harvey Weinstein allegations (Rose McGowan, Ashley Judd, and Alyssa Milano, to name a few). But Kesha wasn't included in TIME's Person of the Year, and her absence is not going unnoticed by fans.

Kesha went through a brutally public court battle in 2016 when she was trying to get free of her contract with Sony that bound her to working with Dr. Luke, the producer who she accused of sexual assault. She claimed Dr. Luke had prevented her from releasing music, and she wanted out so she could work again. She claimed she wasn't trying to ruin his career, she just wanted the freedom to work. She lost her case and the internet came rushing to her support (look up the #FreeKesha hashtag to refresh your memory on this). Celebrities like Lady Gaga and Taylor Swift supported Kesha in the aftermath. Taylor Swift is included in TIME's Person of the Year for a similar situation, and fans are pissed Kesha was snubbed while Swift was included. It's no shade toward Swift, however. While some fans don't believe Swift should be included in the group, there are those who believe both Kesha and Swift should be included.

Fans are arguing that Kesha's legal battle with Dr. Luke, followed by the eventual release of her Grammy-nominated album Rainbow (which featured the single "Praying," Kesha's musical response to the hell she went through in 2016) are part of the foundation the women in "The Silence Breakers" were able to stand on when coming out with their stories. For Swift specifically, Kesha went through an intense legal battle involving sexual harassment and assault, just like she did this past summer. And Swift credited Kesha for helping her through her own lawsuit.

In Taylor Swift's full TIME Person of the Year interview, Swift said she called Kesha asking for help when it came time for her "demoralizing" trial.

People have been largely very supportive of my story since the trial began in August, but before that, I spent two years reading headlines referring to it as “The Taylor Swift Butt Grab Case” with internet trolls making a joke about what happened to me. The details were all skewed, as they often are. Most people thought I was suing him. There was an audible gasp in the courtroom when I was named as the defendant. Once it hit the news that I was in Denver dealing with this, there was an outpouring of support on social media and I have never appreciated it more. I spoke to Kesha on the phone and it really helped to talk to someone who had been through the demoralizing court process.

While it's good Swift credited Kesha in her interview, fans are still disappointed Kesha wasn't included in this group of women.

Admittedly, Kesha's legal battle was in 2016 and not 2017, but fans are arguing 2016 was Kesha's year of hardship and 2017 is when she persevered through it all, setting an inspiring example for women who are also trying to overcome abuse. They also note Kesha put her entire career on the line in her fight to free herself from her alleged abuser. It's worth nothing that it's possible Kesha isn't legally allowed to speak about the trial publicly as part of the settlement. If that's the case, it's also possible Swift mentioned Kesha in order to give her the shoutout she deserved, even if it was a small one.