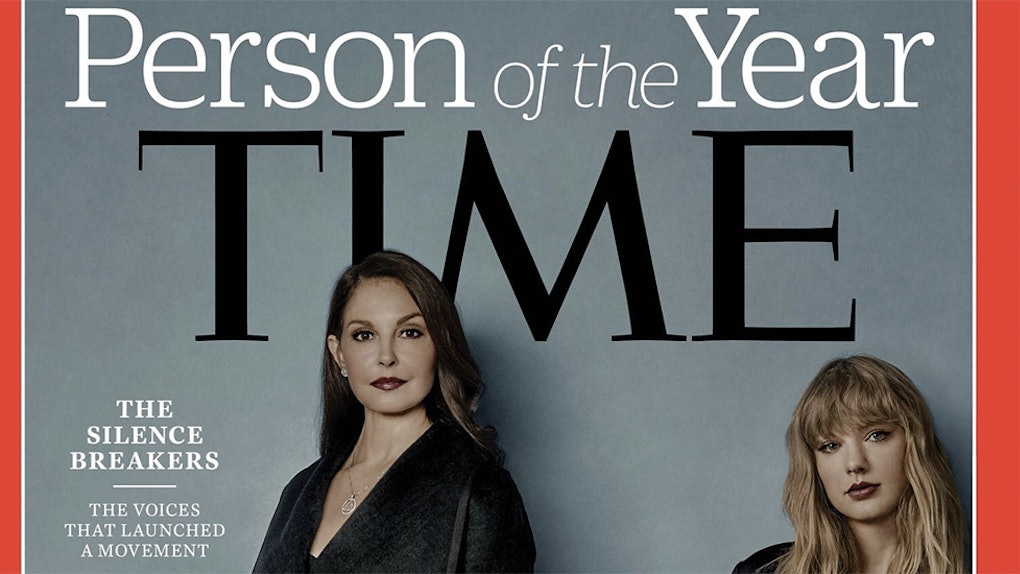 Who Are The Silence Breakers? 'TIME's Person Of The Year Is A Nod To The #MeToo Movement

On Wednesday morning, Dec. 6, TIME Magazine announced its 2017 Person of the Year, and it's not a person at all. The magazine has chosen to highlight the #MeToo movement and selected "The Silence Breakers," the people who paved the way for the national conversation on sexual assault. The decision was announced during the Wednesday morning airing of NBC's Today, which addressed who the Silence Breakers on TIME's Person Of The Year cover are.

"The galvanizing actions of the women on our cover … along with those of hundreds of others, and of many men as well, have unleashed one of the highest-velocity shifts in our culture since the 1960s," a statement from TIME editor-in-chief Edward Felsenthal read.

Five women were photographed for the cover of the magazine's Person of the Year issue, including actress Ashley Judd, former Uber engineer Susan Fowler, and singer Taylor Swift.

Within the issue, though, TIME featured even more "silence breakers," including actress Rose McGowan, who reached a settlement with Harvey Weinstein in 1997 after accusing him of sexual assault. McGowan has been one of the leading voices commenting on sexual assault in the entertainment industry.

"The number of people sharing their stories with me is so intense, especially since all of this is incredibly triggering for me as well," McGowan told TIME. "People forget a lot that there’s a human behind this, someone who is very hurt. But that’s OK. It fuels my fire. They really f*cked with the wrong person."

The people in the Person of the Year story weren't all women, either. Actor Terry Crews shared his own personal story of alleged sexual harassment, accusing Hollywood agent Adam Venit of groping him.

Who created the #MeToo movement?

The "Me Too" movement was created in 2006, but went viral this fall after people turned it into a hashtag to share stories of alleged sexual assault. The creator of the movement is activist Tarana Burke, who told TIME, “sexual harassment does bring shame. And I think it’s really powerful that this transfer is happening, that these women are able not just to share their shame but to put the shame where it belongs: on the perpetrator.”

Who else was considered for Person of the Year?

Before the publication announced its honoree, it shared a shortlist that had been narrowed to include former NFL quarterback Colin Kaepernick, who inspired the movement that saw other NFL players kneeling during the national anthem in protest; former FBI director Robert Mueller, the special counsel in charge of independently running the Department of Justice's Russia investigation; and President Donald Trump.

In November, the president commented on his candidacy for the cover.

TIME would quickly counter the claim that it had told Trump he would "probably" end up on the cover. The president ultimately finished second in the running for cover, earning him special mention within the issue.

"Trump’s candidacy rewrote the rules of politics. Now he has changed the rules of the presidency," TIME national political correspondent Molly Ball wrote. "From Washington to Wall Street, Peoria to Pyongyang, late-night television to social media, much of the world revolves around the Trump show. He inserts himself into social debates — the protests in the National Football League, the fight over Confederate monuments — and instantly turns them into cultural flash points."

Third behind Trump was China's president, Xi Jinping, who has consolidated power in his nation and "dashed the hopes of the Western governments that believed China’s embrace of capitalism would lead to democracy."

More like this
Skateboarder Brighton Zeuner Never Thought She Could End Up At The Olympics
By Rhyma Castillo
The Best "Just Because You're Vaccinated" Memes With Iconic Pop Culture References
By Lara Walsh
Can You Put Emojis In Your TikTok Username? There's A Catch
By Lara Walsh
Stay up to date