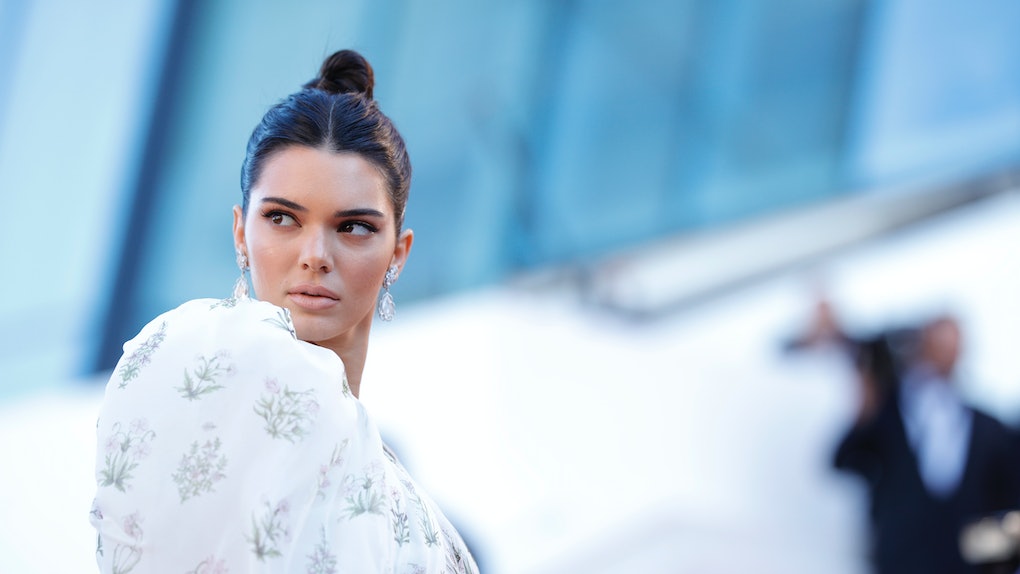 The Kardashians (and possibly Jenners) are a fertile bunch, but sometimes the internet can get slightly carried away with baby bump speculations. One member of the clan is here to speak the truth... and provide a few laughs in the process. Kendall Jenner's response to pregnancy rumors is all-too relatable and will definitely make you respect her clap back.

News began circulating via MTV Australia that the supermodel could quite possibly be expecting. The reason? An Instagram photo. The 22-year-old decided to close out the year with a bathroom selfie in a skin-tight number. In the picture, she is donning a white dress with black polka dots and some serious red lipstick. It's an adorable outfit, but fans could only focus their attention on one thing: her tummy.

MTA Australia picked up on the photo and sent out a tweet that read, "Ummm so fans now reckon @KendallJenner is preggers thanks to this Instagram pic?!" But if there is a family out there who knows its way around social media, you better believe it's the Kardashian-Jenners. A rumor-fueled statement is nothing the supermodel can't handle, so she decided to shut down the questions once and for all.

Jenner replied, "i just like bagels ok!!! and linked back to the MTV Australia article. Brava, girlfriend. Let the record show that Kenny is not expecting.

On the other hand, it's very clear that her big sis Khloé Kardashian is eagerly awaiting motherhood. The celeb's "Best Nine" on Instagram all surround her love with Tristan Thompson and her growing baby bump. While revealing her top photos to her followers, Koko had a very lengthy and emotional statement about what 2018 will bring. She wrote,

Now that leaves us with King Kylie. Unfortunately, much to fans' disappointment, the 20-year-old reality TV and beauty mogul has yet to confirm or deny her alleged pregnancy. She has been under the radar, and followers are losing their minds trying to uncover what's real and what's fake. All they've been given (at least when it comes to Kylie) are clues.

The latest hint about Kylie's pregnancy lies within Kourtney Kardashian's new Instagram photo. The caption seems to suggest that her lil' sis might have a bun in the oven. Of course, we super sleuths put on our thinking caps and tried to figure out what it all means.

The shot features all the Kardashian-Jenner women (minus Kylie) and the caption reads, "When you can’t find the rest of the family for the photo ..." Not to mention, a good chunk of the little ones are missing, too — but obviously the focus is on Kylizzle. The 20-year-old has never been one to shy away from a photo op, so it's kind of odd that she's nowhere to be found this holiday season. Where In The World Is Kylie Jenner, darlings (forget Carmen Sandiego).

While some Kardashian-Jenners are all about their baby bumps... and others take the opposite approach, one thing's for sure: Kenny isn't here for your questions. Pass the cream cheese.