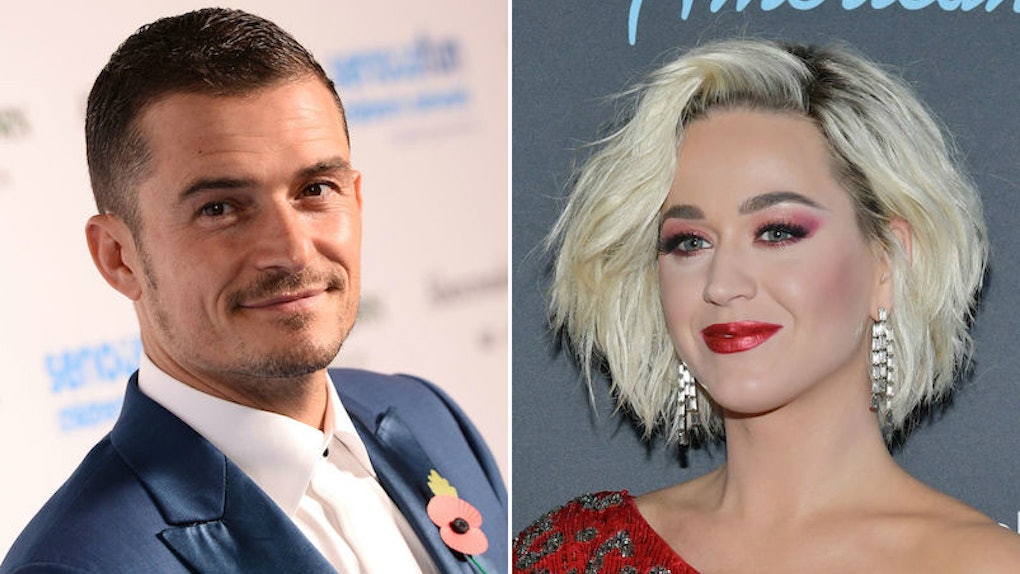 Newly engaged couple Katy Perry and Orlando Bloom are anything but boring. Between the gorgeously unique engagement ring Bloom gave Perry and the couple's hip dates at Coachella, it's clear these two like to keep it interesting. But if you're wondering what the two superstars do in their down time, you might be surprised to learn they aren't that different from the rest of us. In fact, Katy Perry's quotes about family night with Orlando Bloom show just how down-to-earth the A-listers truly are.

In an interview with Us Weekly, Perry revealed that she and Bloom love to make their Sunday nights family nights and just chill together. "Sunday is usually family night for us… Orlando, myself, my sister, my parents, my brother," Perry told Us Weekly at the American Idol: The Listening Session event on April 22 in Los Angeles. "So, it’s like cuddling up with the kids, and we usually watch Idol on Sunday night and have dinner, and we’ll have takeout or what have you," she continued. Basically, their Sunday nights are just like my Sunday nights and I love them for it. (Well, except for the fact that Perry watches herself on American Idol with her family and fiancé, but you know what I mean.)

It's pretty cute that the couple makes it a point to spend time with their family and support Perry on Sunday nights. Perry also informed Us Weekly that her bae gets pretty into the show. "He definitely makes his favorites known," the 34-year-old said. "We all really love Alejandro[Aranda]. I mean, we have a certain type of love for all contestants, but we see kind of that magic thing that you don’t see very often in Alejandro." Perry had previously spoken about how her new fiancé enjoyed watching the show, even accidentally calling him her "boyfriend" in a tweet.

"My favorite part of watching #americanidol with my boyfriend is that he always tries to ask if they got in or not before we give the final vote," the singer tweeted out last month. "I never tell him hahahahahahahahahahaha." Bloom is clearly a pretty big fan of both American Idol and Katy Perry, as he well should.

The two announced their engagement on Valentine's Day this year, with both Perry and Bloom taking to Instagram to share the same sweet selfie. Featuring heart-shaped balloons, a stunning colorful ring, and the two lovebirds totally blissed out, Perry simply captioned her post, "full bloom." Bloom also posted the same photo, writing "lifetimes" on his own post.

While they first started as on-again, off-again, the two rekindled their romance for good in early 2018. Fast forward a year and they're engaged, having family fun nights, and supporting each other along the way. Did someone say relationship #goals? As Bloom previously told The Times, "She’s a remarkable human being, actually," JustJared reports. It's clear that he's just as smitten with her, both on screen, and at home cuddled up on the couch. I, for one, am living for it.