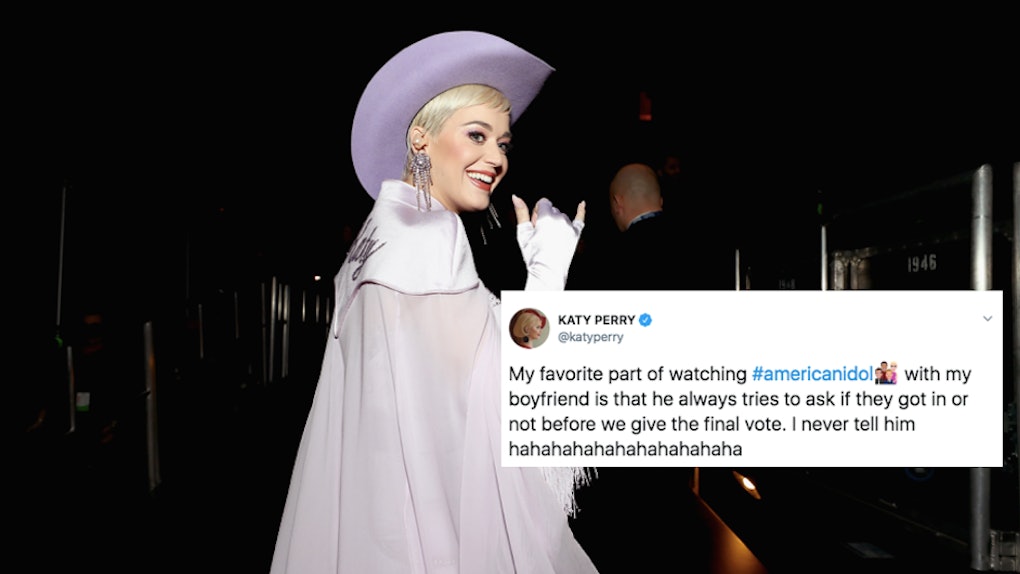 Another day, another example of Katy Perry being the perfect adorable weirdo the world has come to know and love. But this time, Perry didn't awkwardly kiss an American Idol contestant, or pop her head out of a fruit plate. No, this time Perry tweeted something that had fans everywhere laughing out loud and scratching their heads in confusion at the same time. Katy Perry called Orlando Bloom her boyfriend on Twitter, and like, girl... what?!

In case you missed it, Perry and Bloom got engaged on Valentine's Day and basically blew everyone away with Perry's gorgeous ring. So, the tweet was likely just a little slip-up. After all, it happened while Perry was live-tweeting an episode of American Idol and she was probably moving her thumbs unbelievably fast at the time. Her brain was surely moving a million miles an hour, so it's not that big of a deal. But still, fans quickly noticed the apparent demotion from fiancé to boyfriend, and couldn't stop laughing.

"My favorite part of watching #americanidol with my boyfriend is that he always tries to ask if they got in or not before we give the final vote," Perry tweeted on Sunday night. "I never tell him hahahahahahahahahahaha."

It didn't take long for fans to notice that Perry said "boyfriend" instead of "fiancé" and they quickly came in with the jokes.

Again, it was probably just a little mistake, but it's still pretty hilarious. The two have only been engaged for a little over a month, and after calling each other "boyfriend" and "girlfriend" for so long, it's hard to change up that nomenclature. Personally speaking, I've been engaged for seven months and still sometimes call my fiancé my "boyfriend." Sometimes your mind is elsewhere and that's OK! Perry and Bloom have been through a lot together, and just because the 34-year-old accidentally called Bloom her "boyfriend" doesn't mean that they're any less happy.

After their Valentine's Day engagement, the two shared the same photo on Instagram, with equally sweet captions. "Full bloom," Perry captioned the photo of her and her new fiancé, while Bloom simply wrote, "Lifetimes" on his post.

These two are totally happy and in love, and a little tweet mishap isn't going to stand in the way of that truth. Still, it was funny as heck.

In fact, it was such a hilarious moment that Perry herself even noticed the mistake and liked a couple of tweets poking fun at herself.

Perry and Bloom have been together since early 2016, and while they took some time apart in 2017, they are back together and clearly better than ever. Thriving, I would say. The couple still prefers to keep their relationship fairly private, rarely Instagramming together and making the occasional (also very rare) red carpet appearance. It's understandable. They've both lived a lot of their lives in the spotlight, and privacy is so hard to come by as a celeb, that I can't fault them for keeping things low-key. Fiancé, boyfriend, or anything in between, it's safe to say Perry and Bloom are the real deal, and I can't wait to see them tie the knot. I'll be here, waiting for my wedding invite. Any day now, y'all!