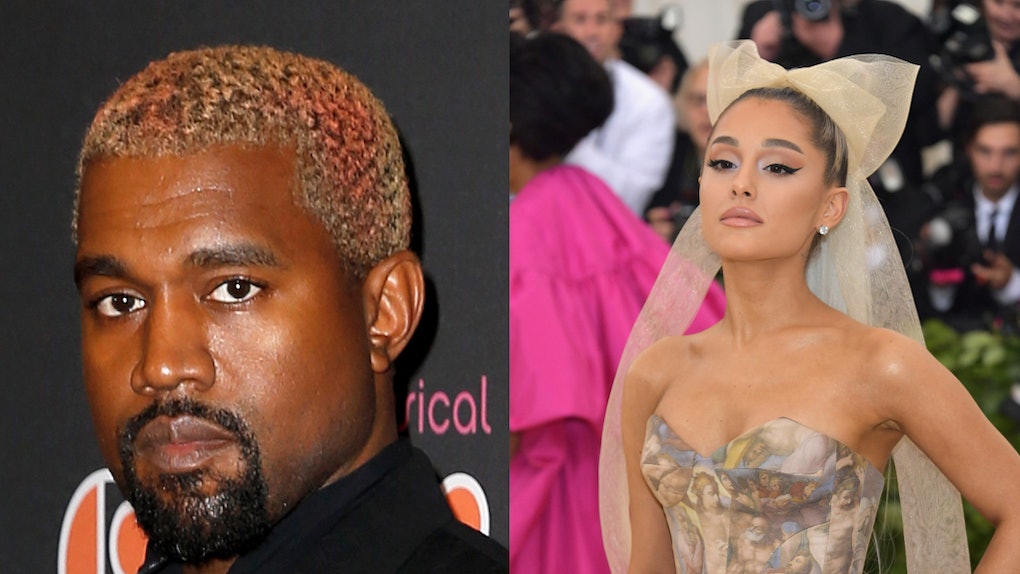 Is the internet even worth it if there's not a celebrity feud going down on Twitter? On Dec. 13, Kanye West shared a few tweets targeted at Drake. Ariana Grande felt that the drama should be taken down a notch and instead, folks should celebrate new music from her and Miley Cyrus — a thought she tweeted. But Kanye West's response to Ariana Grande's tweet about him is a lot.

While West was having a bit of a fit on Twitter, Grande was about to drop a new single on Dec. 14 called "Imagine," and tweeted that the focus should shift there and to Cyrus, who was also set to drop a new hit "for a few hours so the girls can shine." Although Grande didn't mention him by name, West jumped in with a reply saying that he doesn't like "even the slightest" of critique from someone who "respects" him. So, basically, West is not great with criticism. Elite Daily reached out to West's and Grande's teams for comment, but did not immediately hear back. West said in his Dec. 15 tweet,

I know Ariana said this to be cool and didn’t mean no harm but I don’t like even slightest level of slight commentary from someone I know loves and respects me.

But West wasn't finished. A few minutes later the "I Am A God" singer sent out another tweet directed at Grande. This time he called her out for using him to "promote a song." West tweeted,

All of this foolishness weighed on my mental health so @ArianaGrande you know I got love for you but until you’re ready to really make sure everyone’s ok don’t use me or this moment to promote a song.

Following West's second tweet, the "God Is A Woman" singer replied saying that she doesn't "need to use anyone to promote anything." She then continues to say that that her initial tweet was just a comment on what "men were doing at the time vs. women." Instead of dragging him, Grande actually apologized to West. "I apologize if I was in any way triggering and hope you feel well today," she wrote. Talk about a class act, huh?

While she apologized, I don't think Grande was quite over it. A few hours later Grande sent out another tweet, not a reply, but seemed to be directed at West, who used his mental health to call her out. "Stop weaponizing mental health. everyone," she wrote.

So where does this leave Grande and West? Is she sorry about her initial comment? Is she not? I don't know, but it looks like her tiff with West might have triggered the pop star into saying bye bye to Twitter. Yup, that's right. Following all the drama, Saturday afternoon Grande sent out a tweet saying, "Anyway I hate the Internet so much. Sending love. But like bye."

Does the tweet mean Grande is leaving the Twitterverse? Could it be? If it is true, it's a sad loss for all her stans, but TBH I get it. Everyone should probably just go listen to "Imagine" and call it a day.