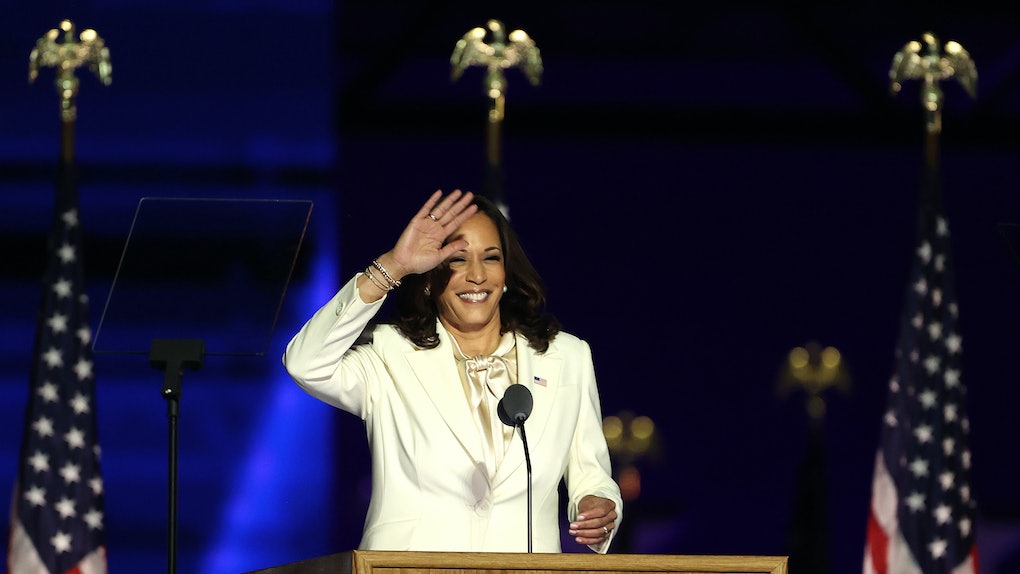 The election results were called on Saturday, Nov. 7, following multiple news outlets calling Pennsylvania's 20 electoral votes for former Vice President Joe Biden. As Biden and his running mate, Sen. Kamala Harris (D-California) celebrate their victory, they're both looking to the future of the country. On the evening of Nov. 7, Kamala Harris' speech after winning the 2020 election shows just how excited she is to implement change after the hardships of the coronavirus pandemic and racial inequality.

Harris spoke to supporters at Biden headquarters in Wilmington, Delaware, on Saturday night. She opened up with a quote, saying, "Congressman John Lewis, before his passing, wrote, 'Democracy is not a state, it is an act.' And what he meant is that America’s democracy is not guaranteed. It's only as strong as our willingness to fight for it."

Harris also mentioned how the past few months have weighed heavily on the American people. "I know times have been challenging, especially the last several months," she said. "The grief, sorrow and pain. The worries and the struggles. But we have also witnessed your courage, your resilience and the generosity of your spirit."

Harris has made history as the first woman, the first Black person, and first South Asian American person to be elected vice president of the United States. In her speech, Harris made sure to pay respect to her late mother, Shyamala Gopalan Harris, who she said is "most responsible" for her becoming vice president-elect. She also gave an inspirational shout-out to "the generations of women — Black women, Asian, white, Latina, Native American women, who throughout our nation's history have paved the way for this moment tonight. Women who fought and sacrificed so much." She also noted how the contributions of Black women in politics are "too often overlooked," but that Black women "so often prove they are the backbone of our democracy."

Harris' first tweet after the election news dropped was a video of various scenes in the country and a Ray Charles version of "America the Beautiful." Her caption read, "This election is about so much more than [Joe Biden] or me. It’s about the soul of America and our willingness to fight for it. We have a lot of work ahead of us. Let’s get started."

Later in the event on Nov. 7, Biden opened up about his VP-elect and how historic her win is for the country. As for her "firsts," Biden said, "Don't tell me it's not possible in the United States. It's long overdue."