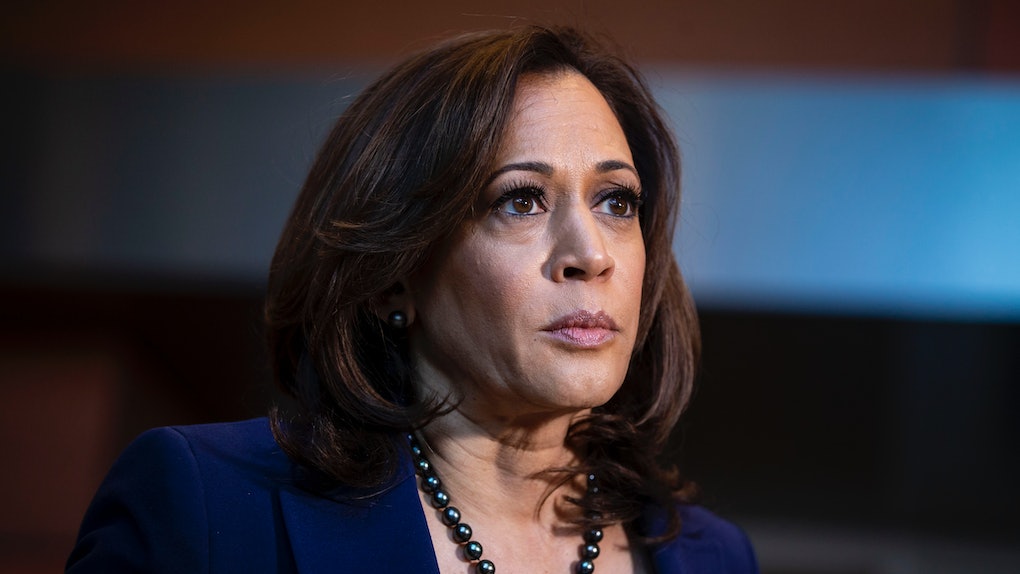 As the 2020 election cycle continues to heat up, presidential possible Sen. Kamala Harris (D-California) is hunkering down on a big issue: gun control. On April 22, the presidential candidate vowed to enact a sweeping gun reform plan if she is elected to the White House. While Kamala Harris' proposal on gun control is a pretty complex one, her plan to close the infamous "boyfriend loophole" is standing out.

Harris opened up about her plans during a CNN town hall on Monday evening, per Politico, saying that if Congress doesn't act on gun control within the first 100 days of her presidency (if she's elected), she'll take executive action to curb gun violence. "There are people in Washington, D.C., supposed leaders, who have failed to have the courage to reject a false choice which says you're either in favor of the Second Amendment or you want to take everyone's guns away," Harris said.

According to a press release provided to Elite Daily, Harris' policy would increase requirements for background checks to include anyone who sells more than five guns per year, punish gun dealers who break the law, and prevent people with outstanding warrants from purchasing guns. "I will require that for any gun dealer that breaks the law, the ATF [Bureau of Alcohol, Tobacco, and Firearms] take their license," she said during the address.

Importantly, Harris also said she would take action to close the "boyfriend loophole" by restricting those who have been convicted of abusing or stalking a dating partner from purchasing or owning a firearm. As it currently stands, the law only prevents intimate partners, such as spouses or ex-spouses, who are convicted of domestic violence misdemeanors from possessing a firearm. Nevertheless, according to gun safety advocacy group Everytown for Gun Safety — women are just as likely to be killed by a dating partner as a spouse, and women are five times more likely to be killed by a domestic partner when a gun is involved. So it's a pretty big issue, is what I'm saying.

But it might be a step that Harris won't have to take. On April 4, the House voted to reauthorize the Violence Against Women Act (VAWA), which included a provision to close the loophole. "This is a really overdue update to the law," Jonas Oransky, legal director of Everytown for Gun Safety, told Elite Daily in an interview at the time. "We've had good domestic violence laws, but there was an oversight in limiting VAWA to spousal abuse. It seems almost absurd because women are as likely to be killed by a partner as a spouse." It just needs a stamp of approval from the Senate, and that's where things get murky, as The New York Times predicts that the provision will be stripped once it gets there.

Gun violence has been a major issue in politics in the past few years. Three of the five deadliest mass shootings in U.S. history have happened in the past three years alone, and the Federal Emergency Management Agency (FEMA) found that 2018 was the worst year on record when it comes to school shootings, per the BBC. Following the February 2018 shooting at Marjory Stoneman Douglas High School in Parkland, Florida, which killed 17 people, gun violence entered the political discourse more prominently than ever with the launch of the March For Our Lives movement. The movement demanded actions like universal background checks, restrictions on domestic abusers and more.

Harris has shown that she's ready to go to bat for this. So who knows? The next few months could see some major changes.