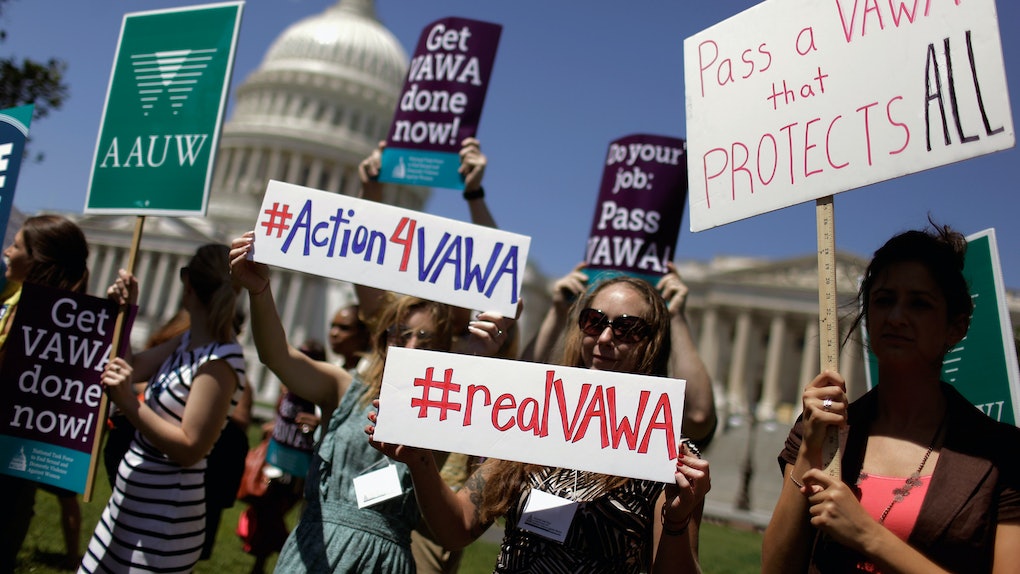 Sometimes, women get a win (or at least, a good shot at winning). On Thursday, April 4, the House voted to reauthorize the Violence Against Women Act (VAWA) in a major move to protect survivors of domestic abuse. And this time, it's even better, thanks to a pretty major addition. The Violence Against Women Act finally addresses gun violence, and here's why it's such a major deal.

On Thursday, 33 Republicans joined House Democrats in a 263 to 158 vote to reauthorize the Violence Against Women Act (VAWA), NPR reported. The legislation, which was first passed in 1994, provides tools to combat violence against women and offers help to those who have suffered abuse. Per The Hill, the act funds places like shelters and rape crisis centers, and offers domestic violence awareness programs. However, it's been lapsed for the past few months. It expired back in February, when its funding was excluded from President Donald Trump's spending bill to avoid a second government shutdown.

This is a really overdue update to the law.

But apparently, that gap allowed for some major changes. In a big step forward for women's safety, the new version adds provisions explicitly intended to keep firearms away from domestic abusers, including dating partners and stalkers as well as spouses. The new bill would lower the criminal threshold required to prevent someone from buying a gun, including those convicted of misdemeanor abuse or stalking. Previously, the definition of "domestic abuser" prohibited from buying guns was limited to those who were married to or previously lived with the abused person, leaving out those who may not have had a legal relationship with their abuser. The change closes what is known as the "boyfriend loophole."

"This is a really overdue update to the law," Jonas Oransky, legal director of Everytown for Gun Safety, a gun safety advocacy group, tells Elite Daily in an interview ahead of the vote. "We've had good domestic violence laws, but there was an oversight in limiting VAWA to spousal abuse. It seems almost absurd because women are as likely to be killed by a partner as a spouse." The bill also requires that the FBI inform state law enforcement when an abuser who is not allowed to have guns tries to purchase a weapon and fails the background check, which will give police time to intervene before the person can obtain a firearm elsewhere and do harm. Besides gun violence, the updated VAWA also addresses additional protections for transgender individuals, immigrant women, and Native American women.

According to Everytown for Gun Safety, American women are 21 times more likely to be killed with a gun than women in other high-income countries. Their research also found that in an average month, at least 52 women from the United States are shot and killed by a dating partner, not to mention those who are injured by one. As of April 2019, there are reportedly 1 million women in the United States that have been shot, or shot at, by an intimate partner, per Everytown, and when guns are present in domestic violence situations, it's five times more likely that the woman will be killed. "The American domestic violence problem is in line with American gun violence problem," Oransky says. "Closing the boyfriend loophole and cutting into the gaps in our domestic violence laws are a big step in the gun violence prevention movement."

The move has, unsurprisingly, drawn opposition from major gun rights lobby the National Rifle Association (NRA). The NRA did not respond to Elite Daily's request for comment, but Jennifer Baker, a spokesperson for the group, told the National Journal on March 27 that the NRA "believes the legislation could lead to firearm confiscations over misdemeanor domestic violence or stalking convictions." She also argued that the new provision is “too broad and ripe for abuse.”

Baker also told The New York Times on April 1 that for “many of those ‘offenses’ — and I’m using air quotes here — the behavior that would qualify as a stalking offense is often not violent or threatening; it involves no personal contact whatsoever.” It's worth pointing out, though, that studies have said that stalking has indeed been linked to violence. According to the National Coalition Against Domestic Violence (NCADV), 81 percent of women who were stalked by a current or former husband or cohabiting dating partner were also assaulted by that person. It also reports that 76 percent of women who were murdered by an intimate partner were stalked first.

Oransky counters that there's "no excuse" not to support the new provision. "The idea that [the NRA] is scoring against this is offensive to domestic violence survivors and gun violence prevention advocates," he continues.

Instead, the NRA has said that women should protect themselves with guns, but research has disputed the theory that this actually works. A 2017 study by the Violence Policy Center, for example, found that women were 100 times more likely to to be killed by a man with a firearm than to use one in self-defense.

It became clear that [he had] a gun.

Lisa Good, a survivor of domestic violence and member of the Everytown Survivor Network, knows firsthand why including stalking is so crucial. After she left her abusive ex-husband at 23, Good, now 54, says that he turned to stalking her. "There would be phone calls, hang-ups, he'd reach out to family members," she tells Elite Daily in a phone interview of her ex-husband's behavior. Although he was never arrested for his abuse of her, because of his behavior, Good says, "It became clear that [he had] a gun." On one instance, she says, he came to her home under a false pretext and assaulted her. "In that moment, my fear was that he had a gun and that he would shoot me and everyone in the house," Good says. "I underestimated the danger that I was in."

Her ex-husband passed away in 2013, but Good says his abuse still affects her. "I felt powerless because there weren't policies in place that made it illegal for him to possess a firearm based on domestic abuse incidents or a domestic violence charge," Good explains. As someone who has been stalked and abused, she says she thinks VAWA and preventing her abuser's access to a gun would've gone "a long way" to keep her safe and out of harm's way. "The inclusion of stalking lends credibility to what we know to be true, which is that it is a precursor to violent act," she says, and thus dangerous to domestic violence survivors.

We need sensible legislation that stops the flow of firearms into the wrong hands.

"Someone threatening you with a firearm is just as bad if they beat you to a pulp," Good emphasizes. "We need sensible legislation that stops the flow of firearms into the wrong hands."

While the legislation has passed the House, that's still not a guarantee that we'll see it enacted. The Times predicts that the provision tackling the "boyfriend loophole" will be stripped once it reaches the Senate. "It would be a true shame," Oransky says of that possibility. "It's both a big deal to do and it's something Congress should be able to do, and we're just waiting on the day to come."