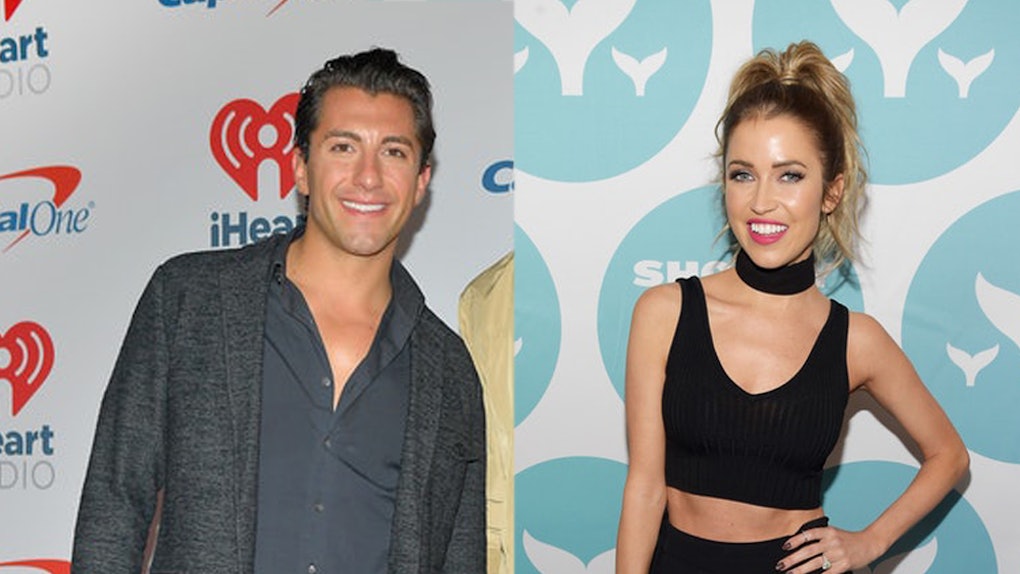 When Kaitlyn Bristowe and Jason Tartick joined Bachelor Nation, they were looking for love, and it seems like they may have finally found it — just not how and with whom they were expecting. This new love affair started when Tartick, a fan favorite from season 14 of The Bachelorette called into Off the Vine, Bristowe's podcast. Sparks flew between Tartick and Bristowe, season 11's Bachelorette, but then, that's not so surprising when you consider Kaitlyn Bristowe and Jason Tartick's astrological compatibility. There's an almost gravitational pull between Gemini and Scorpio when these two intense and witty signs come into contact.

From the looks of things, these two are off to a strong start. On the podcast, Bristowe asked Tartick when he was going to ask her out on a date, and he took her up on the challenge right away. Well, the two went on that date, and apparently it went well because they totally hit it off. According to what Bristowe shared on her podcast, the new relationship is "life changing." She credits the success so far to their healthy communication. "We are so open and honest and like our communication is like so mature and healthy," she explained. As for how quickly things have progressed, Bristowe doesn't appear worried: "No, we're having a great time. It's fun."

Clearly, they seem to be on the right track. The question is, once that intense chemistry turns into a serious relationship, what are their odds of success? That's where their zodiac compatibility comes in. Bristowe was born on June 19, under the astrological sign Gemini, and Tartick's birthday is October 24, making him a Scorpio. Here's what we know about how these signs typically interact in a relationship.

They're beyond attracted to each other

It’s not uncommon for Gemini and Scorpio to have a powerful attraction to each other right away. Both of these signs can be really intense and can feed off of each other’s energy. These are both highly intellectual signs, so they're going to be able to uniquely stimulate each other’s mental erogenous zones. The flirting will be legendary. They will likely play mind games with each other, but rather than being turned off, this push and pull is all part of the seduction dance for these signs. This relationship is at its strongest and most fulfilling in the early phases, when it's just starting to heat up with possibility and sexual tension.

They could come to a head in the bedroom.

As a Scorpio and Gemini couple begins to date, some compatibility issues may begin to rear their head, but nothing that would seriously compete with the infatuation and chemistry between these sexual and powerful signs early on. While Scorpio may prefer one-on-one private time and Gemini wants to paint the town red with their new boo, the chemistry and intellectual stimulation between them can make them forget (or ignore) their growing differences.

What keeps these two signs going are their healthy sex drives. While they're both eager to connect on a physical level and aren't afraid to experiment, push the boundaries, and explore, there are still some compatibility issues in the bedroom for these signs. It's nothing they can't overcome, but it will take some serious communication and honesty to get there, because it's not a physical issue; it's a mental, emotional, and spiritual issue.

For water sign Scorpio, sex is something deep, powerful, and emotional. Whereas for Gemini, it can sometimes just be a bit of fun, because for them, not everything has to be so serious. Gemini wants Scorpio to lighten up a bit, and Scorpio just wishes Gemini would recognize how important the moment is. This can mark the beginning of troubled waters for these two signs.

Once the heat of that initial passion fades and it’s time to get serious about enmeshing their lives, Gemini and Scorpio are in for a rocky ride. That’s because they're polar opposites in many of the most important factors of compatibility. For one, they have totally different communication styles. Where Gemini is talkative and breezy like the air sign they are, Scorpio always wants to get deep. The more this breaks down, the more Scorpio’s trust issues will be activated. Gemini is often caught off guard by the changes that happen in Scorpio when Scorpio begins to lose trust, and that confusion from Gemini can quickly turn into resentment. After all, what Scorpio's blaming them for is just being themselves. If at this point the two can’t have a meeting of the minds and learn to embrace one another’s fundamental differences, this sign pairing might not work out.

So, does their astrological incompatibility mean that Bristowe and Tartick are doomed? Not quite! Only time will really tell, but it definitely isn’t a guarantee the relationship will fail. After all, plenty of Scorpio and Gemini pairings (like Nicole Kidman and Keith Urban) have made love work — it just comes down to fighting for the relationship and connection, and discovering common ground. Also, communication! It may be a little trickier to make this relationships work, but the best things in life are totally worth fighting for.