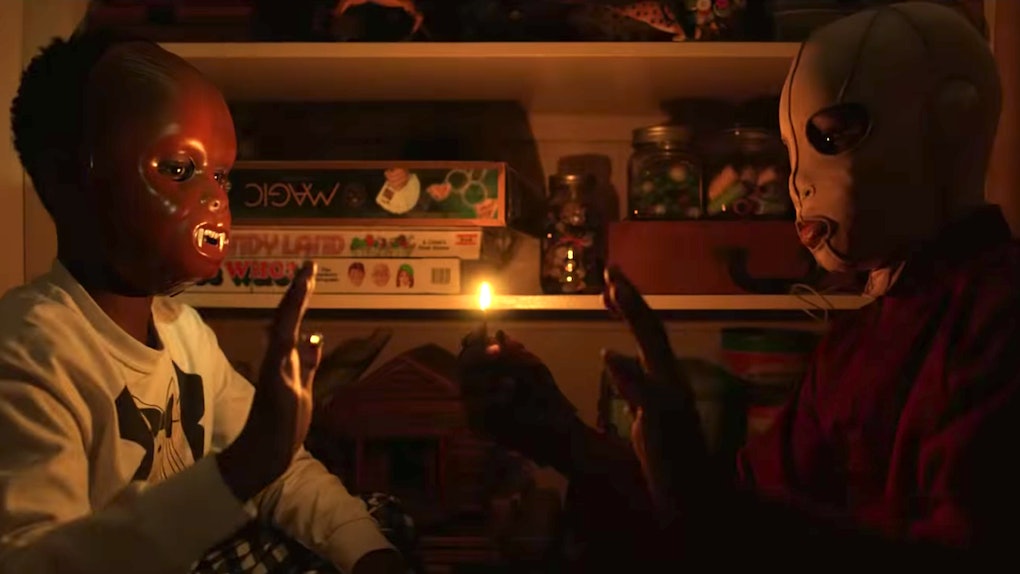 Two years after Jordan Peele changed the whole horror movie game with Get Out, the comedian-turned-director is back to terrify us yet again with his new thriller Us. A little over a month ago, the first trailer for Us dropped, finally filling fans in on the macabre details of the mysterious new story, and now the second trailer has arrived. Let's just say that Jordan Peele's new Us trailer will have you even more petrified of the upcoming movie.

When Jordan Peele first announced Us last year, we were all totally in the dark as to what the film could be about. All we knew at the time was that the Get Out follow-up would star Lupita Nyong'o, Winston Duke, and Elisabeth Moss, and we get a glimpse of the ominous poster showing the Rorschach-like silhouette of two faces back to back. That all changed when the first trailer dropped last month, revealing that the movie will see a family of four confront strange, murderous doppelgängers of themselves while on vacation.

And the newly released Us trailer draws us in even deeper. The trailer begins with Adelaide Wilson (Lupita Nyong'o) noticing a number of alarming coincidences while on a family trip trip to a beach house. Finally, the whole Wilson family comes face to face with their doppelgängers, all clad in red jumpsuits and often wielding golden scissors. Many of these scenes are the same as ones from the first trailer, but we also get flashes of new clips, such as a man holding a sign that reads "Jeremiah 11:11" with four 1's drawn on his forehead. That Bible verse from Jeremiah is particularly brutal, it reads:

Therefore, this is what the Lord says: I am going to bring calamity upon them, and they will not escape. Though they beg for mercy, I will not listen to their cries.

Yikes... Check out the full new trailer for Us below:

Of course, there are still a ton of chilling questions and mysteries left for the movie to unravel, and since it is coming to us from the man behind Get Out, you know that there are some completely unexpected twists in store.

The inspiration for the plot of Us, Jordan Peele said, was a 1960 episode of The Twilight Zone called "Mirror Image." The episode centers on a woman who encounters an exact clone of herself at a bus station, and claims that the clone came from a parallel dimension and can only survive in this dimension by killing and replacing her. It is unclear how closely the plot of Us will mirror that story, but the inspiration is definitely apparent in the trailer. It is also no wonder why Peele found inspiration in The Twilight Zone — he is also currently working on a reboot of The Twilight Zone, which will debut in April.

Us is going to be here in just over a month. The new horror flick is slated to premiere in movie theaters on March 22.