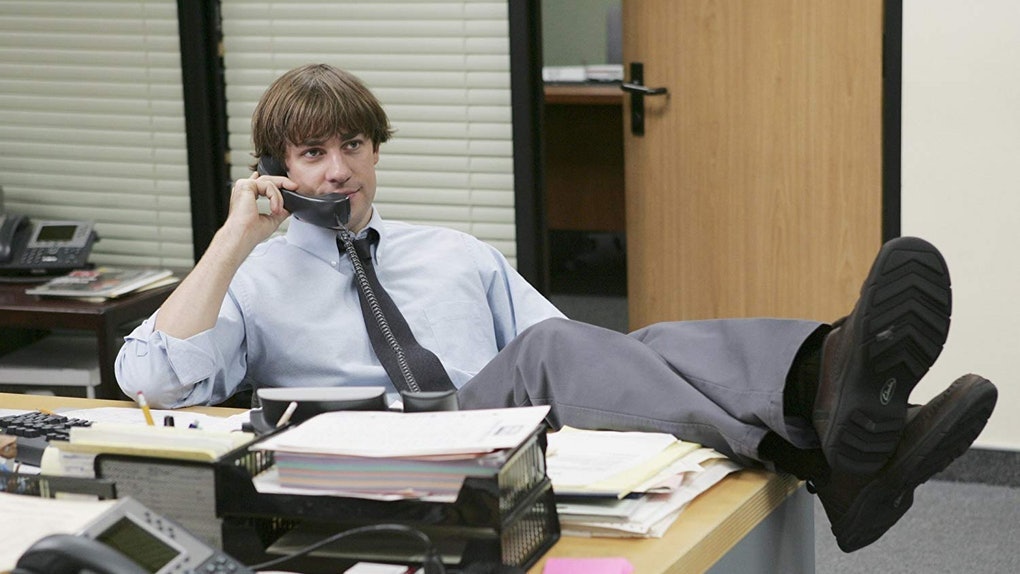 John Krasinski won the hearts of viewers as Jim Halpert on The Office, and he continues to win fans over every time new behind-the-scenes stories about the show are revealed. Despite the sitcom ending seven years ago, there have been a ton of recent revelations, some discussed on the Office Ladies podcast — hosted by Jenna Fischer and Angela Kinsey — and others told by other former cast and crew members of the popular comedy. Now, there's some new info about how John Krasinski wore a wig filming The Office Season 3, and the story behind it is so amazing.

While filming Season 3 of The Office, Krasinski scored a part in the George Clooney-led movie Leatherheads, but the role required him to chop his signature Halpert locks. When Krasinski made a request to wear a wig for the final six episodes of Season 3, showrunner Greg Daniels said no. Krasinski decided to undertake a fun prank to get Daniels to let him wear the wig, but he had to involve the hairstylist on the show to pull it off.

Mashable got the full story from Kim Ferry, the hairstylist on The Office responsible for many of the stars' looks. She agreed to help Krasinski pull off his wig scheme. "He paid for the wig — a human hair wig made by a friend of mine, Natascha Ladek, who's the best wig maker in town," Ferry said. "She came in to do a secret little fitting for him, she made the wig, we got it, and it looked amazing," she said. "[Krasinski] came in a little later that day, and I had the wig hidden in a little secret spot ready for him. When it was just him and I, I put it on him, and then he went out and filmed."

Krasinski and Ferry initially planned to reveal the wig to Daniels the next morning, but instead, he drove over to Daniels' office after they wrapped filming that day.

After she learned Krasinki was going to see Daniels early, Ferry said she followed after him. "I very crazily and nervously grabbed my bag and jumped in my car," she said. When she arrived, though, Krasinski was already talking things over with Daniels and the show's executive producer Kent Zbornak. She waited outside the door for an update. Meanwhile, B.J. Novak, who played Ryan Howard as well as wrote on the show, came up to her, asking "Hey Kim, is this about John's wig?"

Ferry was nervous, suspicious that Novak and the other writers knew she and Krasinski had planned, but Novak said, "Well, I've gotta tell you... I just saw John and I feel like we're gonna know if it's a wig or not," not realizing Krasinki was already wearing the wig.

"I'm thinking like, uh-huh. He doesn't know John's wearing [the wig] right now," Ferry said. "So it made me feel better. And I was like, 'Well, that's interesting.'"

As the door to Daniels' office opened, Ferry went inside. "I literally turned to B.J. and said, 'It was nice working with you BJ,'" afraid that she would have to leave the show after this scheme. "I see Kent, and I see Greg sitting at his desk, and John is kind of sitting next to him, and I see the wig off sitting right in front of Greg," she said.

"The first thing Greg said was, 'Wow. You guys have balls,' and then goes, 'but I have to say I didn't see that coming,'" Ferry said. Krasinski had already waltzed into the office and outlined the reasons why Daniels should let him wear a wig on the show, all while secretly wearing the wig. Ferry continued, "Greg kept saying, 'No! I would know if you're wearing a wig.' So John leaned over the desk and said, 'No I don't think you would.' That's when he ripped it off and shut it down, and we got to do the wig."

"It was worth it cause he really wanted to do that movie and I didn't want to disappoint him," Ferry recalled. "It was nerve-wracking, but it turned out OK. Thank god."

While there's no news of an official The Office reunion in the works yet, it's great to hear how Krasinski channeled his inner Jim Halpert with his wig scheme.